The drama surrounding the Southwest Light Rail Transit Project (SWLRT) is reaching its finale. The Minneapolis City Council has reached a tentative deal with the Metropolitan Council on the Kenilworth Corridor dispute, and a new timeline moves municipal-consent decisions to August.

How did we come to be fighting over this route? The answer is rooted in how metropolitan economies developed in the late 19th and early 20th centuries and a desire to avoid the mistakes of the freeway-building era of the 1950s and 1960s.

According to John R. Stilgoe, who developed this idea in “Metropolitan Corridor,” his 1983 book:

Metropolitan corridor designates the portion of the American built environment that evolved along railroad rights-of-way in the years between 1880 and 1935 … . Along it flowed the forces of modernization, announcing the character of the twentieth century, and abutting it sprouted new clusters of building. … And suddenly, in the years of the Great Depression, in the ascendancy of the automobile, it vanished from the national attention. Yet the corridor remains, although now often screen by sumac and other junglelike trees and avoided by highways, still snaking from one well-known, often-studied sort of space to another.

The Minneapolis-St. Paul metropolitan area grew via these corridors, and they continue to define our urban and suburban geography. As John S. Adams and Barbara J. VanDrasek note in their book “Minneapolis – St. Paul: People, Place, and Public Life,” “The historical need to build tracks, marshaling yards, passenger terminals, warehouse, and car manufacturing and repair shops in both cities before permanent settlement filled in has persistently influenced land use through the Twin Cities. Rail yards and tracks govern the location of industry, neighborhood development, and the layout of road networks.”

An important consequence of this development pattern is that the quality of neighborhoods improved the further one located from the central city. Adams and VanDrasek point out that for Minneapolis before 1900, in particular, “Congestion, high densities, and general squalor near the mills gradually gave way to lower densities, higher ground, and cleaner air farther way.”

They add, “The rich, having alternatives, chose to avoid the noise, soot, and odors of transportation, industry, and commerce. In addition, they shrewdly avoided the congestion created by a hundred trains and more than a thousand railroad cars entering, waiting in, and leaving the cities daily, blocking streets and isolating certain neighborhoods for hours on end.”

The Minneapolis and St. Louis Railway (M&StL) started laying track in what is now the Kenilworth Corridor in August 1871 and reached Carver by November 1871. At the same time the railway built a roundhouse and other facilities under the bluffs of Kenwood. These facilities grew over the years into a large complex of tracks and buildings. 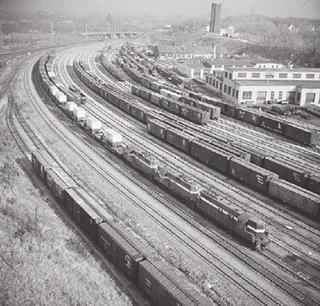 Here are some samples from Hofsommer’s “Tootin’ Louie”:

[In the early 1900s] community relations were at issue in Minneapolis, where M&StL skirmished with nabobs of Kenwood neighborhood, several of whose homes stood on a bluff above the Cedar Lake Yard and shops. Matters reached a fever pitch in 1910, when M&StL sought to expand operations very modestly, provoking a city council order to desist and then the arraignment of M&StL’s general manager for violation of an antismoke ordinance by switch engines working in the yard. This followed complaints from the Kenwood set that smoke and gasses from M&StL’s yard and shop were killing stately elms and maples in their neighborhood; that their household furniture, curtains, carpet, and even food were being destroyed; and the their wash could not be hung out to  dry without being ruined. Moreover, said angry residents’ nocturnal slumber was impossible because of “the ceaseless whistlings, the jarring of heavy cars, and ringing of engine bells,” which, they claimed, made them “ill and fretful.”  Kenwood residents and city officials urged that M&StL move all operations to Hopkins, only a few miles distant.

Back in Minneapolis there was no sympathy in 1934 for parvenu residents of Kenwood, who again sought to have M&StL yards and shops removed from Cedar Lake to Hopkins and wanted M&StL to reroute its two main tracks north of Cedar Lake along Great Northern’s line. The 750 M&StL employees who would be affected by a move to Hopkins, residential and commercial interests along Great Northern’s line, Great Northern itself, and others who would be asked to pay for a project benefiting only the Kenwood nabobs took a uniformly contrary view. The issue did not go away, however, and took on new energy when Kenwood leaders dreamed of using “relief laborers” paid by Washington New Dealers in a way that would reduce the burden to local taxpayers. Nothing happened, but the denizens of Kenwood continued to feel victimized by the railroad and its assorted ilk.

Yet Hofsommer also notes that under a late-1930s corporate reorganization plan, M&StL proposed “closing the Cedar Lake shop and moving all locomotive work to Marshalltown [Iowa] – an idea that Marshalltown greatly applauded but Minneapolis roundly condemned (ironically, given the eruptions against M&StL over many years by the Minneapolis suburb of Kenwood.)”

What do we learn from this?

The controversy over the Kenilworth Corridor is only the latest dustup in our transit history and it certainly won’t be the last. The Metropolitan Council’s regional transit plans envision utilizing existing corridors throughout the area.

Using existing corridors makes sense when we remember how the Interstate Highway System was constructed in the 1950s and 1960s. Freeways such as 94 and 35W blasted through St. Paul and Minneapolis neighborhoods and set off waves of citizen protests.

I think John Stilgoe put the matter best in his most recent book, “Train Time: Railroads and the Imminent Reshaping of the United States Landscape”:

Consider the fate of many Americans who own homes near long-abandoned railroad rights-of-war, perhaps routes now converted to nature trails. As traffic increases congestion on active tracks located some distance away, railroads, shippers, and commuters may demand that the nature trails become a rail route once again. Abutters may scream, “Not in my back yard!” just as so many abutters now complain about increased train traffic – and especially grade-crossing whistle noises – but in the end the “greater public good” may demand rail restoration.

There is no way to avoid the pain of this process short of not building or improving our transportation infrastructure. What we should do is ensure that public policy redistributes some of the gains from building these projects back to those who bear the burden when we use these corridors.