Last Friday you may have heard cheers across the Iron Range. Workers were applauding the U.S. Department of Commerce’s finding that India, the Philippines, Saudi Arabia, South Korea, Taiwan, Thailand, Turkey and Vietnam are guilty of selling steel products below cost in the United States, aka “dumping.” If this finding is upheld by the International Trade Commission, the United States can impose tariffs on imported steel products and thus equalize the price of steel across domestic and foreign suppliers. (Why would a country do this? There are many reasons, but they all boil down to protecting their domestic industries.)

A quote in the Los Angeles Times nicely summarizes the reasoning behind the applause: ” ‘We have this energy boom, we should be making all kinds of money,’ said Cliff Tobey, 40, a third-generation miner in northeast Minnesota’s Iron Range, the source of most of the taconite for steel made in the U.S. Instead, Tobey and thousands of other steel workers across the nation are worried about their job security. They have held rallies in recent weeks to call on federal officials to slap duties on cheap foreign goods. ‘I’m happy with the outcome,’ Tobey said Friday upon learning of the ruling. ‘I’m happy they found what we said was true.’ ”

The economic reasoning implicit in this quote is straightforward: Since imported steel is priced below domestic steel, American steel producers are selling less steel than they otherwise would.  This means that current workers are earning lower incomes than they would if foreign steel were priced fairly.

Unfortunately, the economics of this situation are not as clear-cut as many people believe.  Open international trade produces gains such as lower prices for steel, but these gains are widely dispersed while the costs created by trade (such as job losses) are typically concentrated among a small group of people, in this case Iron Range miners.

What then should we do? Rather than imposing tariffs, there are better ways to ensure that the gains are distributed more fairly to those who lose their jobs or earn lower wages.

Let’s examine this issue in more detail.  Will imposing a tariff that raises the price of steel imports make workers on the Range better off? It all depends on how companies that buy steel react to the increase in its price. And, it is worth noting, any benefits the Iron Range gains will be at the cost of other sectors of the U.S. economy.

One likely possibility is that nothing changes, that is, American companies continue to purchase the same quantities of steel products from the same domestic and foreign suppliers as they did before the tariff. In this case, American steel workers don’t gain anything since U.S. producers sell the same amount of tubing at the same prices as before the tariff. They don’t hire any additional workers and they don’t increase the wages of their current employees.

Another possibility is that increased steel prices lead U.S. firms to buy only American steel products. This might lead American steel manufacturers to hire more workers and/or provide higher wages. It’s also possible, though, that firms that can easily hire and fire workers will simply pocket the higher prices as larger profits with little to no benefits to the employees.

In either case, this isn’t the end of the story. The increased price of steel will cause the price of products that use steel as an input (e.g. office buildings) to rise, or wages in these sectors to fall, or these companies’ profits to fall, or (most likely) some combination of all three. Economic history suggests that it is likely workers will bear a significant share of the costs through a combination of lower wages, lower benefits and reduced hours.

Any gains to the U.S. steel industry created by antidumping policy will probably be offset by the losses to other sectors of the American economy created by higher steel prices. The only group that is certain to gain from all of this is the army of lawyers, accountants, economists and other consultants who work on antidumping cases. 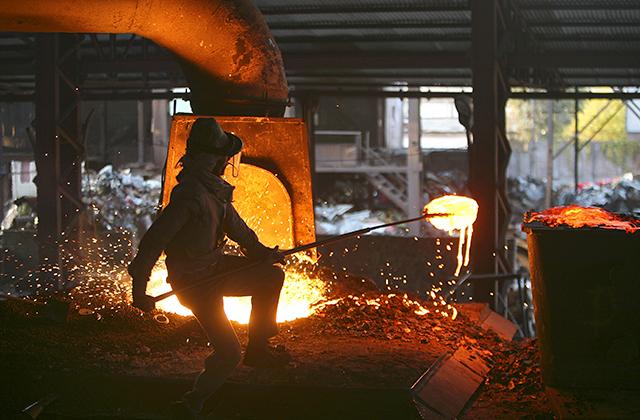 REUTERS/Mukesh Gupta
A laborer works inside a steel factory on the outskirts of Jammu, India.

There are better policies than imposing tariffs. For instance, instead of forcing an increase in the price of imported goods, we could expand our current Trade Adjustment Assistance (TAA) program to help workers in the American steel industry. TAA identifies workers who have lost their jobs due to foreign competition and then compensates them through training grants, income supplements and other programs.

TAA is financed through general tax revenues. This means that the gains to the U.S. economy from lower-priced foreign steel (e.g. higher profits in oil drilling, lower construction costs for buildings) can be redistributed via the tax system to the workers and firms directly hurt by foreign competition. We don’t lose the advantages of international trade (lower prices, more variety of goods) but we do share the gains and losses more equitably.

Of course, TAA is fraught with problems too. Can we really identify whether someone is unemployed because of foreign competition? What criteria do we use to make this determination? The same consultants currently profiting from our current antidumping laws would likely switch to working TAA cases.

This is why most economists favor a more general solution: active labor market policies.  These are “training programs, job-search assistance, employment incentives, supported employment, direct job creation, and other policies” designed to help workers buffeted by the constant churning of the modern labor market. They don’t require any determination of whether or not a foreign company is selling something at a fair price, or whether a worker loses his/her job because of  foreign competition.

Active labor market policies would be financed through general tax revenues and therefore would spread the gains of lower import prices more widely. Thus they benefit workers directly rather than hoping that the effects of a tariff trickle down through an industry, to a company, and then to its employees.

Global competition, technological change and variety of other factors affect all our lives.  Rather than randomly reacting to each individual economic problem as it comes up (e.g. low prices for imported steel) let’s think systematically about how we can build a better labor market for everyone.

I thank Susan Riley for extensive editorial help with this column.

What to do about steel dumping? There are better responses than imposing tariffs