Every Monday morning, I get a newsletter from the National Bureau of Economic Research. I look forward to it because it has the most recent NBER Working Papers — articles that have not yet been published in academic journals but which contain the newest research from leading scholars around the world.

I noticed a paper at the top of the list this past Monday: “Import Competition and the Great U.S. Employment Sag of the 2000s.”  (An ungated version is available here.)  When I read the abstract, a number jumped out at me: 2.4 million.

What’s so special about that number?  It’s an estimate of the net number of jobs lost in the United States from 1999 to 2011 due to import competition from China. That’s far bigger than any assessment I’ve seen before.

Let me put it into context:

The picture below shows the employment-population ratio for the U.S. from June 1983 (when the 1981-83 recession officially ended) to July 2014 (the latest date for which we have data).  The employment population is the ratio of the number of people working to the working-age population; for instance, in July it was 59 percent. 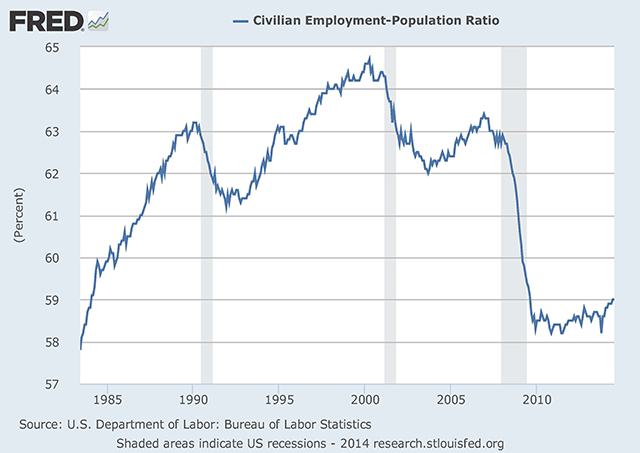 Robert Moffitt of Johns Hopkins University nicely summarized the significance of the sag: “The decline in the employment-population ratios for men and women over 2000–07 … represents a historic turnaround in U.S. employment trends. The decline is disproportionately concentrated among the less educated and younger groups within the male and the female populations and, for women, especially among unmarried women without children.”

Moffitt concentrated on the supply factors that might have caused the sag. That is, he looked at why workers might not have been willing to work as much from 2000 to 2007 as they had been in the 1990s. He concluded that about half the decline for men was due to stagnant and falling real wages, while for women it was a combination of factors involving wages and family conditions. Moffitt also emphasized what did not cause the sag: tax changes, increases in government transfer payments such as unemployment insurance, or minimum wages.

This is where the new study enters the picture. If only half the sag is caused by the supply of labor, the rest must have been caused by changes in the demand for labor, i.e. by employers changing their hiring behavior.

The growing amount of imported goods from China over the past twenty years and the fact that manufactured imports, in particular, often substituted for American-made products might strongly affect the demand for labor in the U.S. generally, and in manufacturing specifically.

This is a tall order, but one that economists can tackle due to the data-gathering prowess of the Department of Commerce and the computing power now available on our desktops. By adding up all of these effects, the authors concluded that there were “net job losses of 2.0 to 2.4 million stemming from the rise in import competition from China over the period 1999 to 2011.”

To put that number in context, think about manufacturing employment. There were roughly 19 million people employed in manufacturing in 1999 and that number fell to about 12 million in 2011. If most of the jobs were lost due to trade with China were in manufacturing, then growing Chinese imports were responsible for about 25 percent of the manufacturing job losses during the 2000s.

Notice this is only due to Chinese imports. My hunch is that if this study is replicated for all of our trading partners the number will probably approach 50 percent.

What should we do about this?

The 2.4 million jobs lost due to Chinese import competition makes this worse, but closing the door to Chinese products won’t reverse the trend. Instead, this study is yet another reminder that we need to formulate new public policy strategies that focus on people, not industries. That is, rather than trying to prop up industries that are having difficulty competing, let’s ensure that our citizens have the education they need to change careers, health care and pensions that aren’t tied to their employer, and active labor market policies that allow them to move from one job to another without destroying their lives.