Last week, the Minnesota Economic Association held its annual meeting, which it does every October. I look forward to it every year, since the conference holds a special place for me: I first attended it as an undergraduate in 1982, and the experience was one of the factors that encouraged me to do graduate work in economics.

This year, my colleague Dora Saha and I invited a group of students from the College of Saint Benedict and Saint John’s University to make the trip to Hamline University. There they heard a lively talk on modern macroeconomics; a thorough presentation on current labor market conditions; and a distinguished panel on the past, present, and future of the Affordable Care Act and MNSure.

I hope the students were inspired as I was 32 years ago, because one presentation, in particular, knocked me out. 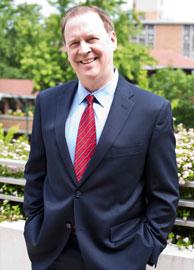 Steven J. Davis of the University of Chicago delivered the Heller Distinguished Lecture — and I’ve been thinking about it ever since. Over the past 25 years, Davis and John Haltiwanger of the University of Maryland have studied the nitty-gritty of American labor markets, using increasingly detailed data to examine how people flow into and out of work, and how these movements affect the U.S. economy.

Davis presented their most recent data, linking reduced movement into and out of jobs (what they call labor market fluidity) to the decline in the proportion of Americans holding jobs (what economists call either the employment-population ratio or simply the employment rate) since the 2001 recession.

Davis packed a terrific amount of information into a one-hour talk, yet one set of graphs struck me as especially important and worthy of your attention.

Let’s start with the big picture, the employment rate since 1977: 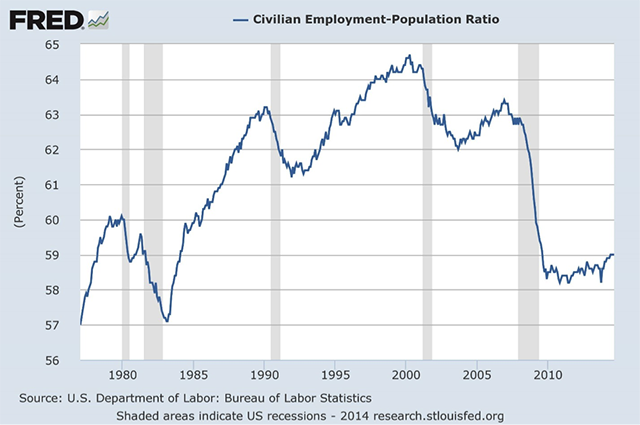 The drop during the current recession was especially large, and it hasn’t been followed by a return to earlier levels of employment. Davis and Haltiwanger hypothesize that the fall since 2000 is due in part to reduced labor market fluidity.

I think their hypothesis is intriguing, but what really caught my attention was their data on employment rates by age, education and sex. These reveal a story that needs to be told — and understood — if we’re going to make good economic policy: the destruction of labor markets for men without a college degree.

Let’s start with the employment-population ratio for all men: 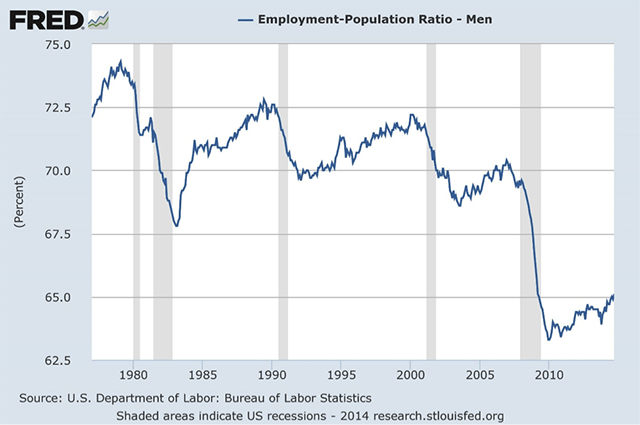 All of these data are easily available via the web. But here’s where Davis and Haltiwanger give us something to think about: They breakdown the employment rate by age and education, starting with men 18 to 64 who have less than a high school diploma: 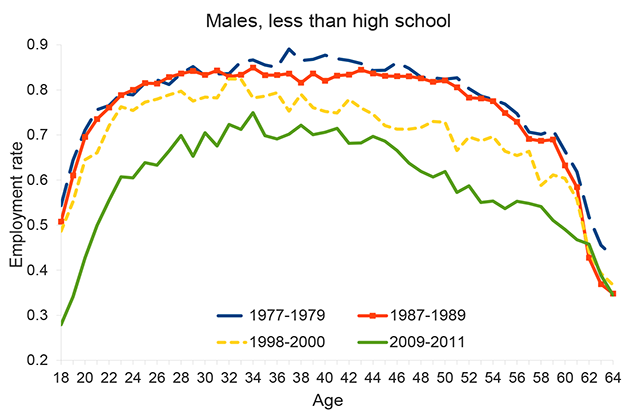 Now, look at how that line shifts down in the late 1990s (the yellow line) and down even further in 2009-2011 (the green line). In particular, the green line slopes downward starting around age 40; by age 50, only half of men who did not graduate from high school are employed.

Now take a look at men who graduated from high school: 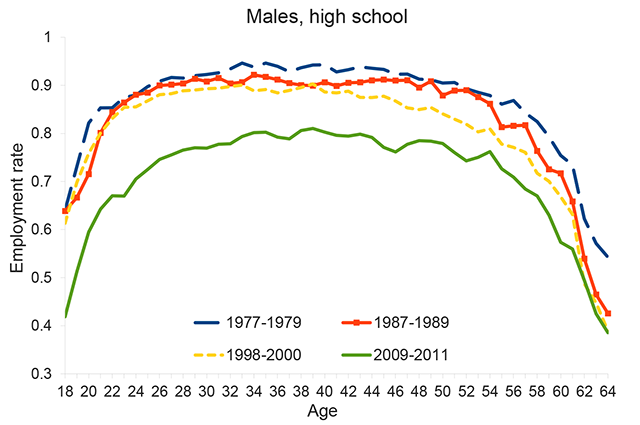 It doesn’t look much better. The same shift hit high school graduates, pulling employment rates down from 90 percent among 40-year olds to about 75 percent. And we see the same thing for those with some college: 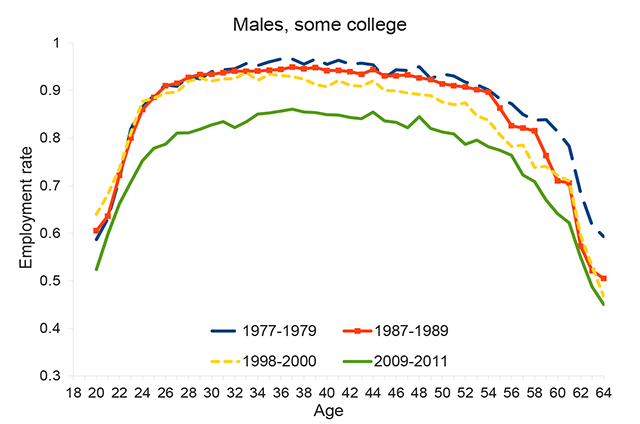 What about men with a college degree?  There’s still a drop but it’s not nearly as big: 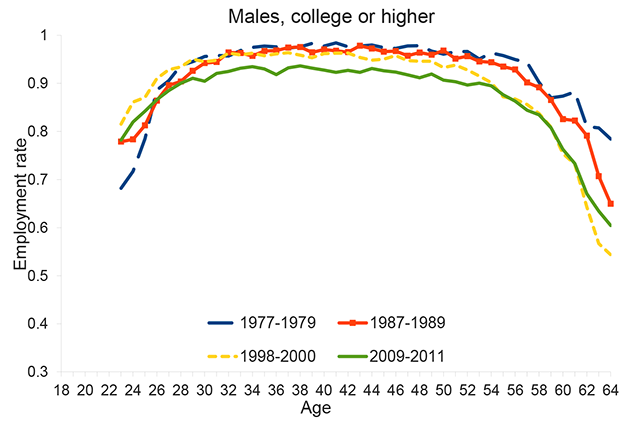 Thus, the falling employment rate among men is concentrated among those with the least education.

When I see these data, two facts stand out. First, public policy must acknowledge the labor market for men with less than a college education is not working. We can’t simply close our eyes and hope that things will get better.

Second, we need to close the achievement gap in Minnesota (and the nation) and reduce the number of men in the pool of men in this situation. Otherwise, we are in deep trouble. The labor market prospects for men with high school diplomas, and especially those without them, is much dimmer than it was for their fathers and older brothers. And the sad fact is that in Minnesota, men of color are much more likely to be in this group than are white men.

This kind of presentation reminds me why I wanted to be an economist. I hope some of the students at the conference feel the same way.