Last week I wrote about a new study by Steven J. Davis and John C. Haltiwanger. The bottom line: The labor market for men without a college degree is not working as well as it did 40 years ago.

The column left two implicit questions unanswered: What about the labor market for women? And, what can or should be done to remedy these problems?

Let’s look at the issue of women in the labor market first, where we’ll want to start with the employment rate for the U.S. working-age population from 1977 to the present: 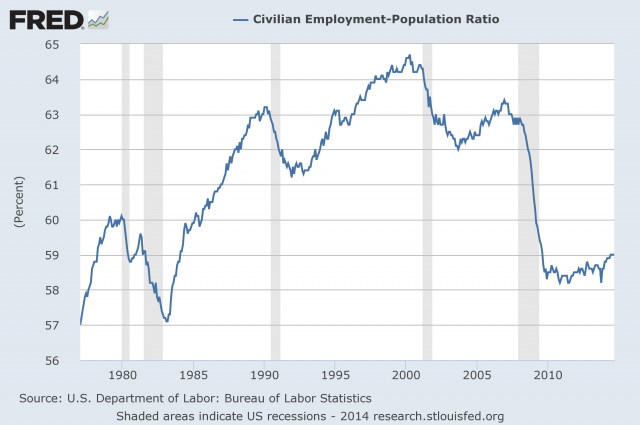 For comparison, the employment rate for men looks like this: 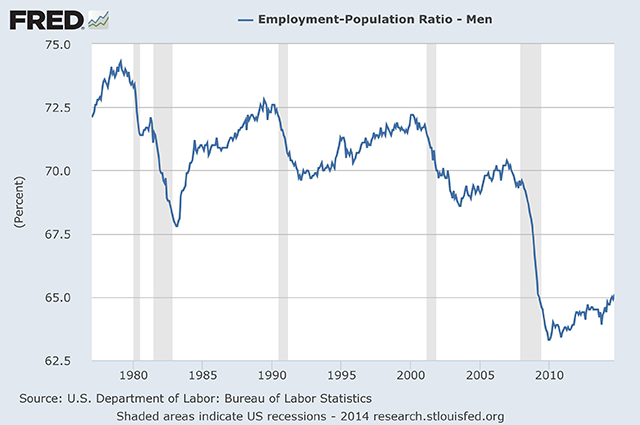 The drop in employment hit men with less than a college education particularly hard, and men without a high school diploma experienced the biggest employment fall.

Now, let’s take a look at the picture for women: 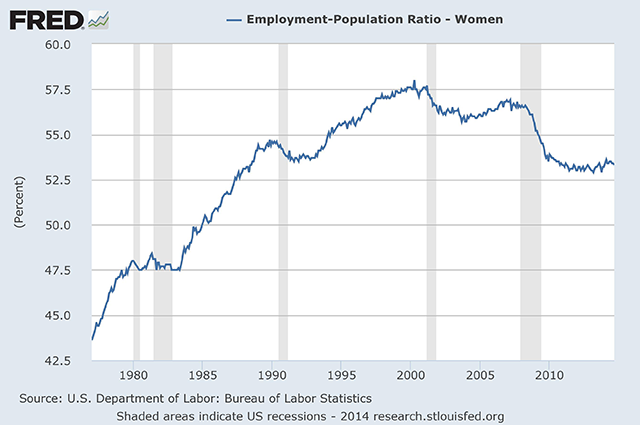 The picture is almost the mirror image of the men’s situation from 1977 to 2000. Employment rates for women rose from about 43 percent in 1977 to about 57 percent in 2000. But since 2000 employment rates fell for women, just as they did for men, except that the size of the drop wasn’t as large.

Davis and Haltiwanger compiled data on women’s employment by age and education, just as they did for men. Let’s look first at women who do not have a high school diploma: 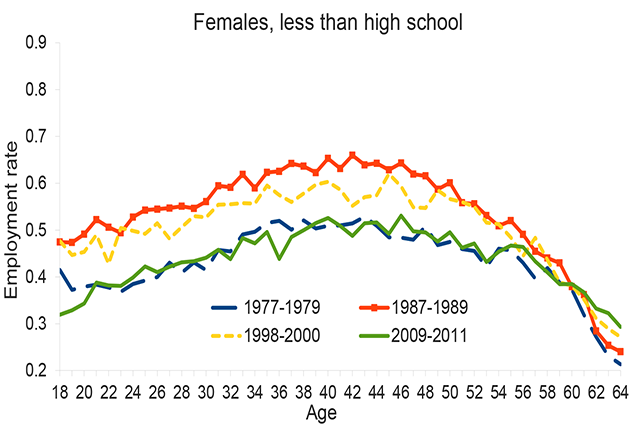 Not surprisingly, the period from 1977 to 1987 saw employment rates rise for women without high school diplomas. About 45 percent of 40-year old women without a high school diploma were employed in 1977; by 1987, that figure had risen to 65 percent. However, these employment rates have fallen over the past 25 years — and are now roughly the same as they were in 1977.

The data for women with a high school diploma look like this: 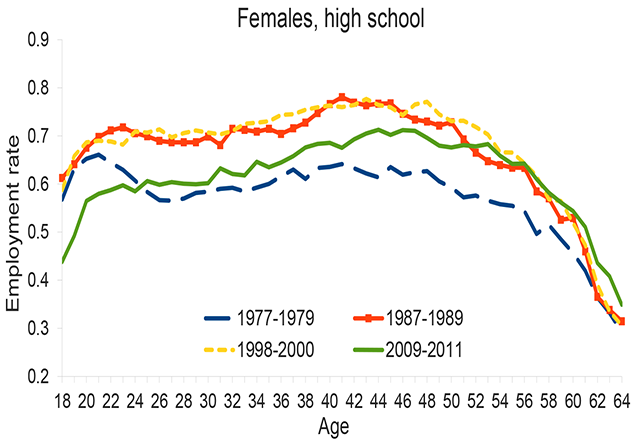 The big story for this group is the change in the age profile. Since the late 1970s, women over 40 with a high school diploma have worked for pay at higher rates.

The picture for women with some college is similar to that of women with a high school diploma: 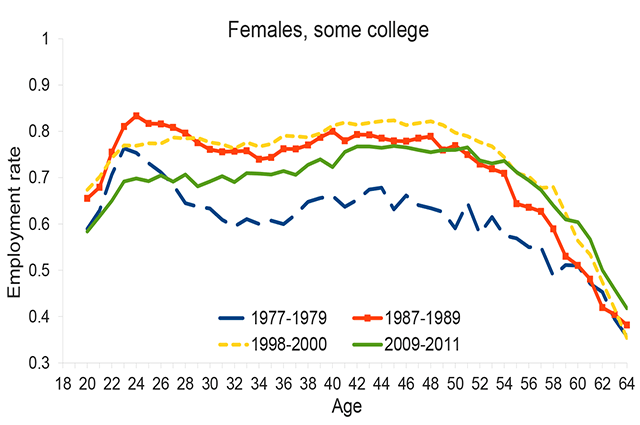 Again, employment rates jumped from 1977 to 1987 and remained above their 1977 levels through today.

Finally, let’s look at women with college degrees (a designation that includes both 2- and 4-year degrees): 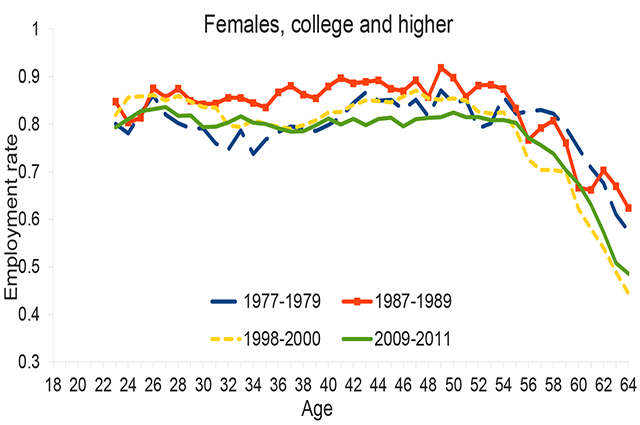 This is quite similar to the picture for men, with a small drop in employment rates due to the Great Recession.

So what’s going on in the market for men and women who don’t earn college degrees?

Let’s take seriously the word market and examine factors that affect the supply of and demand for labor in this market.

The supply of labor is determined by job seekers. My hunch is that part of the rise in female employment rates is driven by the welfare reforms of the 1990s. Work requirements imposed as part of the reforms were aimed, rightly or wrongly, at women — and especially women with children. It looks like women with less than a college education responded the way reformers wanted them to do: they increased their employment.

This might also explain part of the employment record for men. If the jobs available to those with less than a college degree fit better with the skills held by women, then women’s employment rates should rise and men’s should fall. That’s what we see in the data.

The demand for labor also affects the employment rate. Here a problem might be the need for credentials outside of a college degree. Davis presented data during his Minnesota Economic Association talk showing that the percentage of jobs requiring some sort of credential (besides a college degree) rose from 5 percent in the 1950s to almost 40 percent today. You cannot hire someone to cut hair, for example, unless that person has a license, no matter how good their skills are at doing it.

Finally, I’m concerned that public policy is not doing enough to forge links between companies that want to hire workers without college degrees and people who don’t have college degrees. Apprenticeship programs such as those in Germany, for example, might be a good model for connecting high school students with careers.

It’s not good enough to tell people without a college degree that they need to get one. A college degree, whether it’s a two-year or four-year degree, is not for everyone — and we can’t create labor markets that only accept those credentials. Rather, we need to create paths from high school (whether you graduate or not) to the job market and we need to create a variety of labor markets and institutions that connect those who want to work with those who need workers.