Last week, I attended a talk by William Hoffman entitled, “The Biologist’s Imagination: Innovation in the Biosciences.” Hoffman’s presentation inspired me to think about a debate that is raging in economics: whether economic growth will continue at the rapid pace of the last hundred or so years, or whether growth is set to stagnate as new innovations yield only small marginal increases in prosperity. Let me take you through it.

Whenever the economy goes through a deep recession, economists ask, is this a new normal? For instance, consider this picture: 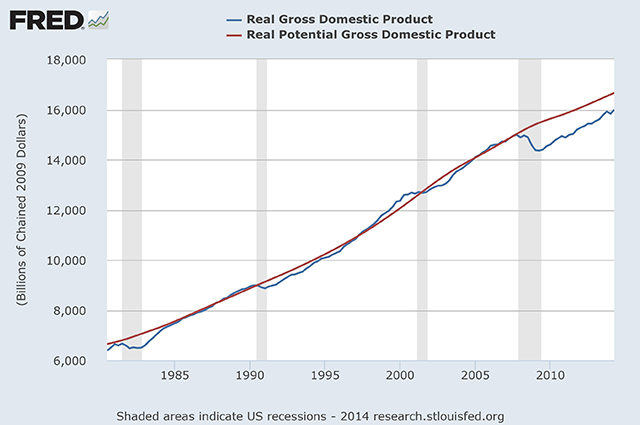 The red line shows US economy’s potential output, i.e. the amount the economy would have produced each year had employment, capital utilization, and productivity grown at their usual rates. By contrast, the blue line displays what the US economy actually produced each year (i.e. its real GDP) from 1981 through mid-2014.

Economists are asking, are we going to remain stuck below the red line? One answer is that the Great Recession damaged potential output and it will grow more slowly for the foreseeable future. Lawrence Summers reached back into the debate that took place in the 1930s and resurrected the term “secular stagnation” to describe this situation of chronically slowing growth. (An e-book that debates this topic is available here.) In Summers’ view, we need much more aggressive monetary and fiscal efforts to get the economy back on track.

An end to rapid growth

On the pessimistic side, economist Robert J. Gordon argues that the period from 1870 to 2000 was “one big wave” of productivity growth, and that the pace of technological progress driving potential output growth is slowing down. When you add in what he terms “headwinds” such as high government debt and an aging population, Gordon predicts that instead of potential GDP per person growing at about 2 percent per year (as it did during the big wave) growth will fall to about 1 percent per year.

This may not sound like much of a difference, but it means that instead of income per person doubling every 35 years (with 2 percent growth) it will take 70 years to double. At 2 percent, you’ll see your children achieve a material standard of living twice of your own, while at 1 percent it will take until your grandchildren are alive to see doubled incomes.

Gordon does not think that the current recession caused this slowdown. Rather, like the tide going out, it revealed trends that have been building for ten or twenty years. And there’s not much that public policy can do to change this forecast.

No end in sight

Erik Brynjolfsson and Andrew McAfee set out the optimistic case in The Second Machine Age: Work, Progress, and Prosperity in a Time of Brilliant Technologies. They write that “the outstanding features of the second machine age” are “sustained exponential improvements in most aspects of computing, extraordinarily large amounts of digital information, and recombinant innovation.” (Italics mine.) They go on to say that “these three forces are yielding breakthroughs that convert science fiction into everyday reality, outstripping even our recent expectations and theories. What’s more, there’s no end in sight.”

How can we reconcile these two perspectives? Here’s a picture that can help us think about them: 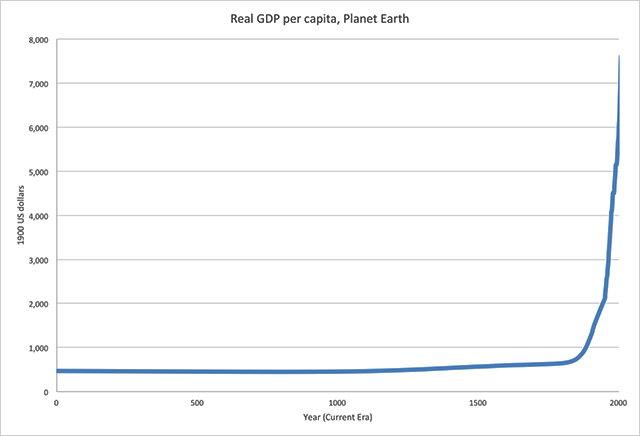 This graph summarizes our best guess about average income per person over the past 2000 years. The acceleration after 1500, and especially the rapid acceleration after 1800, is what Nobel laureate Simon Kuznets referred to as Modern Economic Growth and what we colloquially call the Industrial Revolution.

Gordon thinks that the great upward sweep in per person income that started 500 years ago is going to slow down significantly. Economic growth won’t disappear and in parts of the world such as Africa, Asia, and Latin America it will be rapid as these areas assimilate the technologies developed in North American and Europe.

The average rate of growth will, however, slow down over time throughout the world. Steam power, electricity, running water, internal combustion engines, and the other technologies of the Industrial Revolution dwarf gene sequencing, iPods, the Internet, and other modern innovations.

Brynjolfsson and McAfee take the opposite stance. They say the exponential, digital, and combinatorial nature of technological progress that is already taking place and that is on the horizon will both sustain high rates of worldwide growth and will accelerate growth in countries such as the U.S.

A parallel to biology

This is where Hoffman’s talk, and the book he co-authored with Leo T. Furcht, comes into play. Hoffman contends that innovation in the biosciences looks much more like the exponential, digital, and combinatorial examples that Brynjolfsson and McAfee cite. A slide from Hoffman’s presentation makes this point: 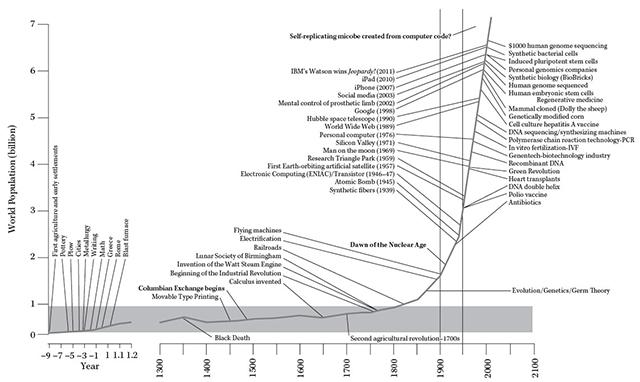 This graph also shows the pace of innovation and demonstrates nicely that innovation accelerated as well and shows no signs of slowing down. Perhaps gene therapies and other biomedical breakthroughs won’t bend the curve like the steam engine, but they’ll keep progress going by allowing us to combat greenhouse gasses and feed a planet of 9 billion people.

Gordon and Brynjolfsson/McAfee do agree on one point: no matter what happens to the average rate of growth, there is a strong chance that growth will primarily benefit those at the top of the income distribution. This applies both across countries (that is, high income countries will benefit more than lower income countries) and within countries (the top 1% of income earners will do better than the remaining 99%). Brynjolfsson and McAfee call this the Bounty (higher income growth rates) and the Spread (great disparities in income and wealth driven by the Bounty).

I think that Hoffman, and more broadly Brynjolfsson and McAfee, are right about the Bounty, but I’m most concerned about the Spread. And, I worry that policy makers will pay far more attention to the former and not to the latter. We have to make sure they deal with both.

Hoffman’s talk was part of Technically Speaking: Leadership in Action, a lecture series sponsored by the Technological Leadership Institute at the University of Minnesota and designed “to share ideas, inspire, and teach.”