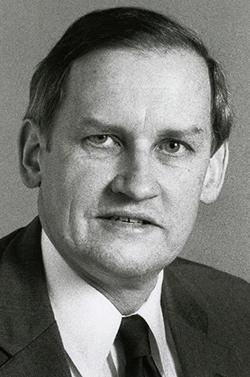 Yesterday at lunch a colleague asked me, “Is this going to be a good couple of years or not?” He was referring to the results of Tuesday’s election and the prospects for getting anything productive done in terms of economic policy during the next two years.

If he had asked me on October 28, my answer would have been quick and short: no, there’s not much chance we’ll get anything done in the next two years. On the 28th, we were nearing the end of a campaign featuring erroneous assertions about Minnesota’s job growth, unemployment rates, and economic policies compared to other states and a generally low level of literacy on economic policy. The bitterness seemed palpable in the mail filling my St. Cloud mailbox.

Then, on October 29, I attended the annual celebration of John Brandl and his “Common Quest for the Common Good” and regained my optimism. I listened to Don Fraser and Al Quie, went back to John’s writings, and hope returned.

John Brandl graduated from St. John’s University in 1959 and earned a Ph.D. in Economics at Harvard. He worked as analyst in the McNamara Defense Department of the 1960s and then served as a deputy assistant secretary in the Department of Health, Education and Welfare under President Johnson. John then returned home and joined the faculty of the University of Minnesota, where he served as a faculty member and dean in the Humphrey School of Public Affairs. From 1977 through 1990 he served in the Minnesota Legislature, first in the House and then in the Senate.

I had the privilege of getting to know John after his retirement from the U of M, when he came to St. John’s and St. Ben’s to teach students and mentor those of us on the faculty who were trying to get students interested and involved in public policy. He is buried in the St. John’s cemetery and when my office was at St. John’s I would regularly take a walk out to his grave to say hello. Sometimes, if I was thinking about a thorny problem, I’d ask, “What would you do, John?”

I continue to ask this question because John’s starting point for public policy was that “only competition and community can dependably channel the efforts of free people to public purposes.” Further, he argued, “competition and community do not substitute for government. They are the instruments through which government facilitates the working out of public purposes by a free people.” (Both quotes are from John’s book, “Money and Good Intentions Are Not Enough, or Why a Liberal Democrat Thinks States Need Both Competition and Community.”)

I push this idea with my students because this is at the heart of economics more generally. Our discipline studies how societies allocate their scarce resources across infinite needs and wants, and we use both competition and community to carry out this task. Economists emphasize competitive markets, but I always point out that markets are instruments to an end, not the end itself, and that building community can be as effective or perhaps even a better way of providing the things our society values.

This is where Democrats and Republicans should start when they think about economic policy. What mix of competition and community will work best to close Minnesota’s racial achievement gap and promote our state’s long-run economic growth? How can tax policy be formulated to encourage Minnesota’s businesses to focus on delivering great products and services in competitive markets rather than using the tax code as their primary route to increasing profits?

But can or will our elected officials do this? I don’t know if they will do this, but listening to Don Fraser and Al Quie I heard how they can do it.

Fraser told us that a good policy maker starts the process by figuring out where he or she stands on an issue, not triangulating their position relative to party or constituents. Only then can you talk to members of your own party, the other party, and your constituents about it and learn from them.

Quie pointed out that good policy is like a child: it has DNA from both parents. And, the way to get that mix is to Listen, Think, and Love.

Laura Bloomberg, associate dean of the Humphrey School of Public Affairs, said that John Brandl had both “a powerful intellect and a big heart.” If we follow John Brandl’s lead and build our policies on competition and community, if we learn from Don Fraser to know where each of us stands on the issues, and we listen, then think, and always love as Al Quie teaches us, then my answer to my colleague today is “Yes, we can do great things.”

Is there hope for cutting through gridlock? John Brandl shows us a way