Immigration policies promise to be divisive during this election season. Calls for a border wall, immigration restrictions, and a pause on refugee resettlement ring out at the national, state, and local levels.

Some Minnesota candidates express concerns about the supposed costs to local communities of refugee settlement, suggest that immigrants may be terrorists and attack the character of recent immigrants. (Interestingly, one Republican gubernatorial candidate who has expressed such concerns once described immigrants as, “resourceful, they value education, and they believe strongly in family and community.”)

Underlying much of this talk are anxieties about the economic consequences of full-throttled immigration. Unfortunately, these debates rarely place the issues at hand into a broader, historical context. Let’s examine some key trends in American immigration history and take a look at some of the scholarly research regarding the long-run effects of immigration on the economy.

A good place to start is to look at the number of immigrants arriving in the US. Reliable data begin in 1820, and I’ll draw on a recent survey of US immigration that charts the data through 2010. 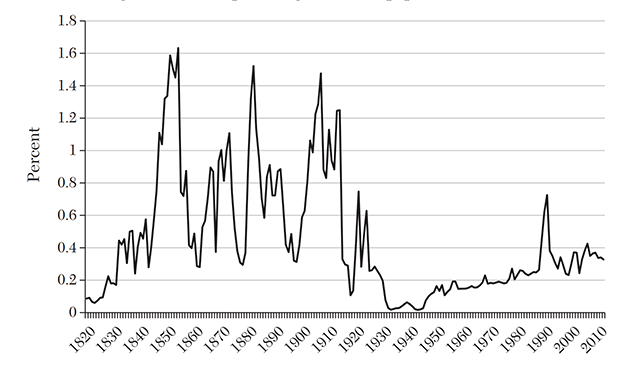 The graph shows that US immigration reached a peak in the early 1850s, when measured as a percent of the American population, with similar spikes in the 1880s and 1900s. Relatively open borders in the 19th and early 20th centuries led to immigration levels that far exceeded current levels as a percentage of the population.

Next, take a look at how these data played out in terms of the percentage of the population born abroad:

Foreign-born population as a percentage of the US population, 1820–2010 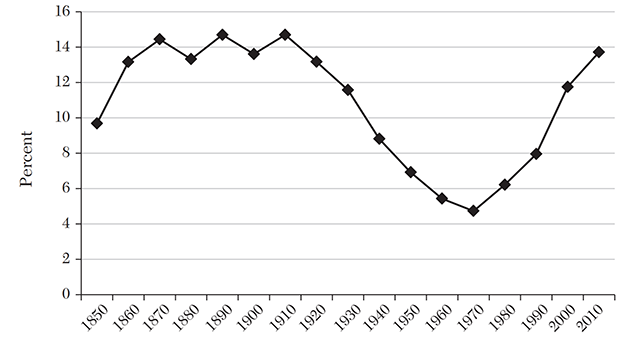 Good data on foreign-born residents starts with the 1850 Census. The foreign-born proportion of the population fluctuated around 14 percent from 1860 to 1910, steadily declined until 1970, and converged back towards 14 percent today.

These two pictures tell an important story: rather than thinking of today as anomalous (i.e. why are there so many immigrants today?) we should understand that the years 1940 to 1990 were atypical in American history. In other words, an America with relatively low levels of immigration and a relatively small percentage of the population born abroad is the anomalous period in American history, not today.

This brings us to a third piece of historical information, the geographic distribution of the foreign-born population: 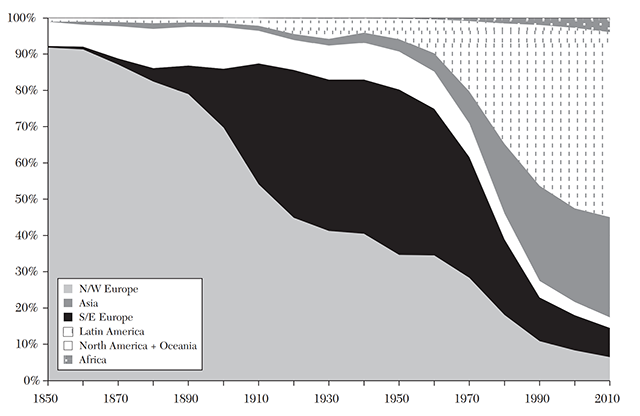 European immigration dominated the nineteenth century, especially northern and western Europeans before 1880, with eastern and southern European-born residents growing steadily larger as a percent of the foreign-born between 1880 and 1920. The changing mix of immigrants led to a rise in anti-immigrant sentiments and calls for immigration restrictions that echo those we hear today.

The Immigration Act of 1924 effectively closed the door to new arrivals for forty years and enforced this pattern. In particular, the 1924 act both reduced immigration levels and created a quota system based on the proportion of the population that was born abroad in 1890. This scheme favored immigrants from Europe, generally, and western Europe, in particular.

This began to change with the Immigration and Naturalization Act of 1965. Congress removed the quota system based on geography and replaced it with guidelines that promoted family unification. The result was a surge in immigration from Latin America and Asia. Here is where the past differs from the present. Until the 1970s, European-born immigrants predominated, but since then the face of immigration has changed from white Europeans to people of color from Asia and Latin America. Just as happened a century ago, the changing face of immigration is leading politicians to play to anti-immigrant attitudes.

Long-run effects of immigration on the US Economy

The data we’ve just examined describe the flow of immigrants into the United States. What were the long-run effects on the US economy of these waves of immigration?

In “Migrants and the Making of America: The Short- and Long-Run Effects of Immigration during the Age of Mass Migration,” economists Sandra Sequeira, Nathan Nunn, and Nancy Qian analyzed the economic effects of immigrants who arrived in the U.S. between 1850 and 1920 on the economy up through today. To do this, they paired U.S. counties with low shares of immigrants in 1880 with similar counties in 1880 that had high immigrant percentages. For example, in Minnesota they matched up Cass County (17% foreign born) with Douglas County (33% foreign born), then traced economic development using a variety of factors over the next 100 years.

They found that, “immigration facilitated economic growth.” Controlling for a variety of factors, counties that drew more immigrants in the late-nineteenth and early twentieth century (such as Douglas County) now have higher incomes, lower poverty rates, and lower unemployment rates than those that drew fewer immigrants (such as Cass County). In particular, immigrants were an important source of labor force growth in both skilled and less-skilled jobs. In Minnesota, this supported agricultural, mining, and manufacturing industries that provided the foundation for today’s diversified economy.

Conclusions: past and present

Do these findings apply to today and the years to come? For instance, the U.S. economy no longer rests on a base of agriculture and industry but rather produces most of its GDP in the form of services. Can we draw lessons about a service economy from an industrial economy’s experience?

Yes, I believe we can apply this study to today’s debates. Immigrants today, just as in the past, bring skills that are valuable to our economy. These include both physical skills (e.g. immigrants working in agriculture or in food processing) and knowledge (e.g. immigrants employed in high-tech industries).

Norwegian, Swedish, German, Italian, Slovak, and Chinese immigrants of yesterday who farmed in Douglas County, who mined on the Iron Range, and who worked in the factories of the Twin Cities created infrastructure and wealth in the past. So too will the Latino, Somali and Hmong immigrants of today. Further, just as over the past one hundred years, the children of these new Americans will gain the knowledge and skills that will drive our economy for the next century.

The economy is not a static phenomenon, with fixed jobs and industries requiring a stable and unchanging range of skills and technologies. It is a dynamic, ever-changing process with jobs morphing and new industries appearing over time. Immigrants are not the same as they were 100 years ago, but neither is our economy. The new immigrants, like the old, will contribute positively to the evolving economic order of the next 100 years.

The U.S. economy has changed a lot over the last two centuries. The contribution immigrants make to it hasn’t