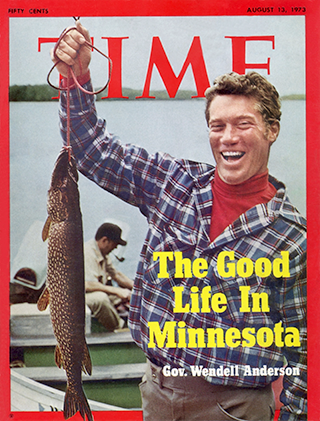 The cover story, “Minnesota: A State that Works,” noted, “if the American good life has anywhere survived in some intelligent equilibrium, it may be in Minnesota.”

What few at the time realized was that 1973 was the year Minnesota became above average … and it has stayed there ever since.

How did it happen?

Minnesota’s income per person was 15 percent below the national average when the United States entered World War II. It hadn’t always been this way. Before World War I, Minnesotans enjoyed incomes that were above the national average, but the decline of the flour and lumber milling industries in Minnesota from 1900 to 1920, along with the collapse of agricultural commodity prices in the early 1920s, caused Minnesota, along with its neighbors, to fall behind.

This story centers on the evolution of Minnesota manufacturing from processing raw materials, such as grains and timber, to producing innovative consumer and industrial goods, in particular, high-tech products.

This ecosystem was centered on the Twin Cities but benefited the entire state.

The five anchor firms worked with specialist firms that provided services, such as design and specialist manufacturing, and ancillary industries that supplied products and expertise. These companies were headquartered or had facilities in communities such as Alexandria, Hutchinson, Rochester, and a variety of other places throughout the state.

On top of all of this, Minnesota’s computer industry originally specialized in producing equipment for the Defense Department and national intelligence agencies such as the National Security Administration. This allowed Minnesota to partake in the Cold War defense-spending bonanza of the 1950s and 1960s, and put the state in a position to reap the benefits of the non-defense expansion of federal, state, and local government computer demands as well as growing private sector demand for computing equipment.

The explosion of our computer industry would not have been possible without three other developments. First, between 1920 and 1950 Minnesota’s manufacturers shifted from processing raw materials (e.g. milling wheat and timber) to creating value-added products made from agricultural products (e.g. producing baking mixes and paper).

Second, the evolution in manufacturing required companies to invest more resources in research and development at the company level. Third, companies such as Honeywell (in control systems) and 3M (in adhesives and magnetic media) grew rapidly before and during World War II and created a network of machine shops, small manufacturers, and service providers located throughout Minnesota.

All three of these factors created a high demand for skilled workers both within Minnesota and from surrounding states. The demand for more highly skilled employees also encouraged local colleges and universities to offer more technological training in both applied and theoretical areas.

Thus, for example, when Engineering Research Associates moved into a former glider factory in the Midway district, there was a network of machinists, draftsmen, and financial resources in place ready to propel the computer industries’ growth. And, riding these waves, Minnesota went from below the national average to above average in about 30 years.

Minnesota’s economic growth slowed to the national average during the 1980s. This meant that the state remained above average in per-person income but didn’t pull away. This was the result of two major developments.

First, personal computers produced by Apple and the new businesses based in Silicon Valley started displacing the big computers produced by Control Data, Univac, and IBM-Rochester. Second, the Reagan defense spending boom slowed down in the mid-1980s and this, along with the end of the Cold War in the late 1980s and early 1990s, led to reduced orders from the federal government.

Taken together, sales of large, high-speed computers to both private businesses and governments dropped off from the early 1980s onward and this hurt Minnesota’s computer industry, with Control Data, Honeywell, and Univac (now Unisys) sharply contracting their operations.

Yet Minnesota’s economy absorbed these blows and again grew faster than the national average in the 1990s. High-tech industries continued to flourish in Minnesota as a legacy of the computer industry and because of smart public policies.

The economic ecosystem created by the computer industry remained in Minnesota even when Engineering Research Associates, Univac, Honeywell, Control Data, and IBM-Rochester morphed into new companies and, in some cases, disappeared. The knowledge and skills of Minnesotans (what economists call human capital) along with the firms that developed to support the earlier computer industry remained and shifted to create the basis for the state’s thriving businesses in medical devices, retailing, logistics, and health care.

The investments Minnesotans made in education also played an important role in keeping this ecosystem healthy. The TIME cover story noted that the Legislature had recently passed what came to be called the Minnesota Miracle, consisting of increased income taxes that equalized education funding across the state and reduced education funding’s dependence on local property taxes. This especially helped communities outside the Twin Cities as they could reduce property taxes on agricultural property yet maintain the quality of their local schools.

Similarly, the state continued to invest in post-secondary education. The Legislature directly funded the University of Minnesota and the technical, community, and four-year colleges that became the MNSCU (now Minnesota State) system. Further, state policy strengthened Minnesota’s private colleges as well by creating the Minnesota State Grant Program that provided aid to Minnesotans attending any college in the state, public or private. These policies continued and deepened under Govs. Rudy Perpich, Al Quie, Arne Carlson, and Jesse Ventura through the 1980s and 1990s. They shrank during the 2000s under Gov. Tim  Pawlenty, but the Legislature and Gov. Mark Dayton restored much of the funding over the past seven years.

Lessons from the past

Forty-five years after Minnesota’s star turn on TIME’s cover, our economy is still above average. This shouldn’t lead us to complacency, as there are plenty of challenges ahead. We must reduce the gaps in educational experiences and outcomes between white Minnesotans and people of color throughout the state. We need to ensure that the ecosystem of firms that supported the computer industry of the past and the companies of today have access to the human capital and technology to thrive in the coming years.

Private initiative and public support drove Minnesota’s economy from below average to above average. Thus, it’s clear that we need both sectors to work together to ensure Minnesota’s long-term economic health.

And by the way, if you’re curious about Wendy’s fish, I’m sorry to say the mystery remains. As Dayton remarked at Anderson’s memorial service in 2016, “Whether the fish was actually caught in that moment, or had been previously chilled in somebody’s freezer, has been rumored but never substantiated.”

1973: The year Minnesota became above average (and stayed there)