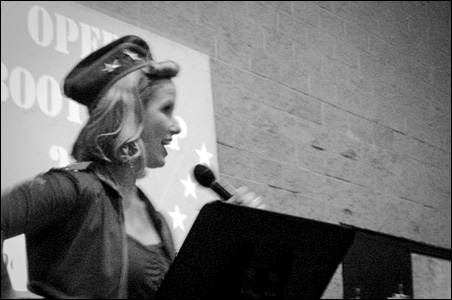 The Minnesota Opera offered something that they called an “Opera Boot Camp” Thursday night. I have never experienced an actual boot camp — I suspect the Venn diagram where “military professional” and “art critic” cross over is relatively small. But I expect it isn’t much like this. There was fine wine and cheese, for one thing, which is an area we art critics have regular experience in, but may be less common in mess halls.

Additionally, my sense is that most drill sergeants bear closer resemblance to R. Lee Ermey than they do Teaching Artist Angie Keeton, who was dressed, rather fetchingly, in a sort of pin-up version of a USO uniform, which might be distracting during maneuvers. But, then, I doubt R. Lee Emery can shatter a glass just by singing it, and Keeton can, as she demonstrated in a video that the Opera Twitter account promises will be available soon. 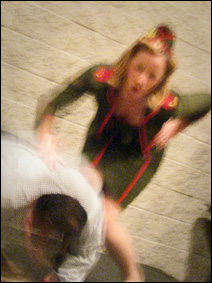 MinnPost photo by Max Sparber
“Drop and give me 20.”

The function of the evening was twofold. Firstly, it served as a general introduction to opera, with Keeton offering a quick and unexpectedly slangy overview of the history of the genre (“The French thought Wagner was cray-cray,” she said at one point). This was coupled with live performances from singers with Minnesota Opera, accompanied by piano, representing music from different eras — there was some of Mozart’s “Marriage of Figaro” and some of Gounod’s “Romeo et Juliette” and a selection from Sigmund Romberg’s “The Desert Song,” if I remember right. There was also a tour of the building, and some party games, and then a man did pushups while Keaton pressed her high heel into his back, which is a mark of a successful party.

The second function of the evening was to introduce potential opera-goers to a program called “Tempo,” which is designed to make the august artistic institution more appealing to young people. Audiences have been shrinking for opera, as they have for theater, with many institutions relying on a diminishing house of graying audience members. And so Tempo members get discounts on ticket prices, and special events in which they can meet cast members and taste scotch, which does seem like a good deal. I got drunk with an opera singer once, and can recommend it.

I am not sure why opera puts people in a mood of katzenjammers; giving them a tour of Minnesota Opera’s building is a good idea in addressing this. It’s hard to be frightened of an organization where the costume department regularly has bake-offs and the scenic workshop frequently throws its back door open to grill food, as these folks do. The organization has an interesting building in general. The company recently added rehearsal rooms in which, with a flip of a switch, performers can experience what it might be like to sing in a cathedral or an arena or a large performance hall. When nobody was looking, I snuck away with my girlfriend, took over one of these rooms, and made noise while she flipped switches, with this being the result:

We managed not to get caught. This is also a mark of a successful party.

When you speak of parties, it gives you a logical segue into discussing F. Scott Fitzgerald, who made his reputation as a sort of documentarian of the decade-long party that was The Roaring Twenties. In fact, his very first published story, “The Camel’s Back,” tells a staggering, deliciously funny story of a party, around Christmastime, where a brokenhearted young man in a fur coat drunkenly makes an ass of his cab driver at a costume ball (read it here).

A local performance troupe called The Erstwhilists will be performing this story this Saturday and Sunday night, and they specialize in creating something like a live radio show, with foley artists creating sound effects on the spot to accompany the story. They’ll be performing at the James J. Hill House, which is an interesting choice, as Fitzgerald has a word or two to say about Hill. At the end of “The Great Gatsby,” when the self-made man — his fortunes from bootleg whiskey — has died, his father shows up to see the body. “If he’d of lived, he’d of been a great man,” Gatsby’s father says. “A man like James J. Hill. He’d of helped build up the country.”

This discussion makes the narrator uncomfortable.

Let us speak of one last Christmas party, this one at Orchestra Hall. On Saturday and Sunday, they will be offering a program they call “A Scandinavian Christmas,”  featuring selections of music including Edvard Grieg’s “Norwegian Dance,” which is precisely the sort of thing you might expect them to program. But they’ll also be performing “The Elves’ Christmas” by Swedish schoolteacher William Sefve-Smith, a popular Christmas song in Swedish that has a sneaking, almost militarist quality to it that sometimes sounds positively demented. I wonder what sort of English-language children’s music might sound similarly sinister to Swedish ears.

Nix that. I know the answer: “The Teddy Bear’s Picnic.”