I can’t be the only one who is tired of Minneapolis’ reputation for niceness. Frankly, I’m not sure where it came from. For one thing, we’re a town with about the surliest customer service people on earth. Any time you want to purchase something at a restaurant or a store, you’re met by the glare of somebody who seems under the impression that you’re asking for an undeserved favor. There is almost no such things as public conversations with strangers — elsewhere in the world, people just chat at bus stops and in line to movies. Here, if somebody does either, they’re either going to beg money from you, rob you or explain how the U.S. government orchestrated the collapse of the Twin Towers. 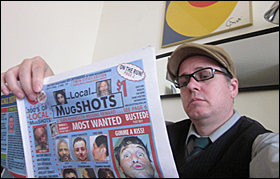 But if we’re not actually nice, we are, in fact, actually quite bad sometimes. And so, for this issue of Max About Town, I’m going to take you on an abbreviated tour of crime in the Minneapolis area; there’s plenty more to publish, and, every now and then, I shall do so in the future. But for today, I recommend starting the tour by picking up the latest issue of “Local MugSHOTS,” which can be purchased in almost any corner bodega in the cities and consists entirely of photographs of locals who are either wanted by or have been apprehended by law enforcement.

According to the publishers, when a new issue appears on the stands, folks like to gather around and see if anybody they recognize is in it, which might explain why the subjects of the mugshots are grinning proudly as often as they are scowling. It’s worth reading the magazine just to remind ourselves that Twin Citians are still doing bad things, and also because, in a perverse twist on “Where’s Waldo,” they occasionally hide an image of Barney Fife among the actual lawbreakers.

For an older version, you can flip through “Least Wanted’s” notorious photostream for Minneapolis arrestees from the ’60s, such as this young lady with extraordinary cat’s-eye classes, or this young woman who has made a bold eyeliner choice. And, of course, the city of St. Paul still posts pictures of people arrested for prostitution-related charges.

But let’s get out of the house, shall we? Let’s head to the alley behind a nondescript residence at 1825 2nd Ave. S, right across from Stevens Square Park. This was the home of publisher Walter W. Liggett, who was behind a newspaper called “Midwest American” that specialized in investigating organized crime. He particularly took issue with a local criminal bigwig named Isadore Blumenfeld, who went under the more stylish moniker Kid Cann, and was in charge of Minneapolis’ bootlegging, prostitution and labor racketeering. Liggett explored a link between Cann and Minnesota Gov. Floyd B. Olson — the two had grown up together. As a result, Liggett was arrested on trumped-up morals charges (he was accused of luring two teenage girls from Austin to Minneapolis for a night of drinking and “spooning”), he was beaten, and then, in the alley behind his house, on Dec. 9, 1935, he was machine-gunned to death as his family looked on. Cann was indicted, but the cops had been sloppy and the trial was a farce, and he walked. 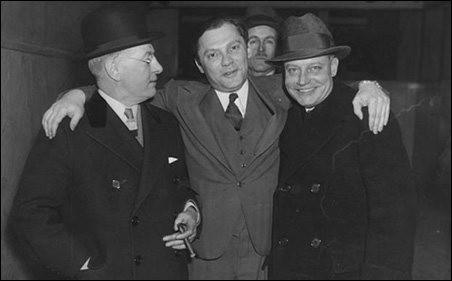 Photo originally from the St. Paul Daily News
Kid Cann, center, after his acquittal for the murder of Walter Liggett.

For those who are interested, you can see one of Cann’s former homes at 3417 W. 38th St. near Lake Calhoun and visit his headquarters, the former Flame Nightclub, at 1523 Nicollet Ave downtown.

Across downtown, in the warehouse district, is the Harmony Lofts, and it was here, on April 27, 1997, that Andrew Cunanan began a killing spree that eventually led to Miami, the shooting of fashion designer Gianni Versace, and a massive manhunt that somehow overlooked that Cunanan was just blocks away from Versace’s residence, hiding on a houseboat. Cunanan was not a Minneapolis native — he hailed from California — but he was here on the invitation of architect David Madson, who lived in the Harmony lofts, and who, along with a a former naval officer named Jeffrey Trail, would be Cunanan’s first victims. Trail’s body was found in Madson’s apartment. Madson’s remains were found on the shore of a lake in Rush City. After Cunanan was surrounded by police and took his own life, authorities went through his possessions, looking for some clue as to what had started this spree. They found little of note: A number of books by C.S. Lewis and tube after tube of hydrocortisone cream.

Let’s take a little trip out to Excelsior Boulevard. There’s not much to say about this street nowadays, which connects St. Louis Park to Hopkins, but it could fairly stake a claim for having been one of the most vice ridden in Minneapolis. (More about St. Louis Park’s unexpected criminal history can be found at the St. Louis Park Historical Society’s web page.) For instance, in the ’70s, this was the site of the Body Shoppe Sauna (4414 Excelsior Blvd.), which was closed repeatedly for prostitution charges, and tried to be quite clever, offering $20 “rap sessions” in 1979 in which clients paid for a half hour of conversation. They must have been rather vigorous conversations, as two employees were arrested for soliciting. Kimiko’s Sauna was here as well, at 4300 W. 36 1/2 St., but they were considerably less subtle: they offered Vietnamese massages and, as a side-bonus, there was a good chance of being on hand to see the place raided by the cops, which happened with great frequency. And nearby was The Bunny Hutch (3130 Excelsior Blvd.), whose owner was progressive enough to offer his employees Blue Cross/Blue Shield insurance.

There was also Duffs in the Park (4700 Excelsior Blvd.), which wasn’t a massage parlor, but a bar. But, this being the ’70s, they offered lingerie shows and models in body paint until the St. Louis Park passed an anti-nudity ordinance in 1974, although one can’t imagine why. Were there really complaints from people who couldn’t enjoy a cocktail because of the semi-clad hippies wandering about?

But this had been a troubled street, dating back as far as 1934, when an employee of the National Lead Co. named Theordore Kidder, who was rumored to have ties to the mob, suddenly found himself the victim of a gangland-style assassination outside the Brookside building at 6001 Excelsior Blvd. Coming home from a child’s birthday party with his wife and mother-in-law, Kidder was annoyed at a sedan that bumped his car. Kidder got out to confront the other driver and was shot 17 times.

We’re also in the area of two large drug busts. For instance, on May 30 of 1990 at 6850 Meadowbrook Blvd., police raided an apartment that produced an astonishing 659 pounds of marijuana. Conservatively, that amount would fetch about $1 million nowadays. Does that seem like a lot? Well, then head on over to 7005 Wayzata Blvd., where, on June 19, 1984, police found a footstool shaped like an elephant outside an Amoco station. Inside was 12 pounds of uncut heroin. The police estimated that once cut and sold on the street, the heroin could have fetched $50 million.

All this talk of crime runs the risk of making readers feel unsafe, and that’s not my intention. And so I shall end this column with a story of crime thwarted. Let’s go to 3142 Lyndale Ave. S. in the Lyn-Lake neighborhood, where, on Aug. 9, 2006, several residents of an apartment suddenly found themselves the victims of a home invasion. Four men forced themselves into a third-floor apartment and threatened the residents with a gun. One, fearing for his life, grabbed a novelty samurai sword that was on the wall and, with an expertise born of panic, managed to drive the intruders away, one with a bloodied head, one missing fingers. This story ends, as these sorts of stories often do, at the Hennepin County Medical Center (701 Park Ave.), where the home invaders were arrested after seeking treatment.

Come along for my tour of Minneapolis crime history