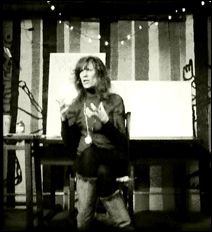 There’s a popular statistic out there: One-third of younger Americans get their news from “The Daily Show” or Stephen Colbert. I don’t know how true this is. I do know that on Saturday I got my news from “Daily Show” co-creator Lizz Winstead.

Winstead, who is a native to Minnesota and has been back for several months working on a book, was offering a course in writing political satire. About 30 students registered, including yours truly, and spent a good portion of the day in the basement of Java Jacks coffee shop in south Minneapolis. It’s a funny little basement, by the way, with a mounted animal head on a wall and a bijou little bar area and a makeshift stage where, as I understand it, Jim Walsh used to host his Mad Ripple Hootenannys. It looks like the basement rumpus room of some hipster uncle.

It wasn’t a good day for me. I was on the tail end of an especially miserable cold and I think my poor body had gotten confused and decided it was a neti pot. Whatever fluid I put into my body it instantly added salt to and pushed back out my nose. I bought a box of tissues at the start of the seminar; by the end of it, I had used them all. Additionally, I was possessed of occasional little coughing fits, which I knew could be annoying, so I tried to keep them as quiet as possible, resulting in brief, repeated episodes where I would vibrate for a while and produce the sorts of sounds little dogs make when they are just learning to bark. Today, I can proudly state that my cough has expanded to something operatic, with deep timbres and sonorous overtones. I credit the fact that I have been practicing nearly continuously all weekend; it’s true what they say about practice.

Winstead was polite enough to ignore the spectacle I was making of myself. She began with a round of introductions, and I can tell she’s done this before — she demanded, and enforced, that people kept their introduction short. She repeatedly complained about workshops where the instructors don’t bother with anything resembling instruction but instead spend their time sharing celebrity stories — she promised she wouldn’t do this, and mostly kept to it, although she did share with the class that Pierce Brosnan had lived in her apartment building. But I haven’t had this experience with workshops. In my experience, there’s a real risk at this sort of thing that other students might be the distraction. A certain percentage of people don’t go to seminars in order to learn anything, but to demonstrate that they already know the subject, or think they are the subject, and so will pontificate at length about themselves. I can understand the impulse — I did, after all, just spend a paragraph lovingly detailing my illness. But it strikes me as a waste of money at a seminar. My policy is to keep my head low, ask questions when I have them, do whatever work is asked of me, and otherwise just quietly drain fluids and occasionally vibrate.

I don’t know if there were any of these problem students in Winstead’s class; as I said, she kept a tight reign on things, and only had to cut off one young man, an actor with a extensive résumé that he attempted to essay in detail. Once introductions were out of the way, she offered a brief overview of how she started incorporating political satire into her stand-up comedy, telling of a disastrous date she went on on the eve of the first Gulf War. She and the prospective beau went to a screening of “La Dolce Vita,” which he fell asleep during, and afterward went out for drinks. The television at the bar had CNN on, and the news station was broadcasting the opening moments of the war. “They already had graphics, and a theme song,” Winstead said. “And I wondered: Are they reporting on a war — or selling it?”

At that moment, her date turned to her and said “This is so cool.” And Winstead thought to herself, well, they’ve sold it to him.

As a result, when she co-created “The Daily Show” with Madeleine Smithberg in 1996, Winstead made sure the show included a critique of the media itself — the show would treat the media as a character. This proved to be a prescient decision, as both MSNBC and FOX news launched within the year; the show Winstead co-created is still known as much for skewering how news is presented as it is for skewering the news itself.

And then, in the class, it was on to theory. Winstead had written a name on a white board: John Boehner. “What do we know about him?” she asked. The answers came quickly, and were about what you would imagine: He’s orange; he cries a lot; he plays a lot of golf. “Now,” Winstead asked, “how many of these answers have anything to do with his actual politics or policies?”

None. So we offered a second list: He handed out checks from the tobacco industry on the House floor; he threatened to cut off funding to the Smithsonian because of a fleeting image of ants on a cross.

“This second list is where you should be drawing your comedy from,” Winstead said. “If you draw from the first list, it’s just snark.”

According to Winstead, snark closes down the possibility of conversation, because it mocks people for superficial foibles, or things that may be beyond their control. But real satire, which is rooted in people’s philosophies and their significant actions, allows the possibility for dialogue, because it raises questions. You can’t write good satire without knowing the subject, and without having good questions about the subject, and those questions demand to be answered.

We spent much of the rest of the day working on our own satiric pieces, in groups of four, with Winstead repeatedly dropping in on the group, looking over our work, and offering suggestions. The class was scheduled to run until 4 p.m., most of us were there until 5:30. We just continued working past the end of class, and Winstead just kept checking in with everybody and offering suggestions. I was in the “pop culture” group, and this group was tasked with writing about Charlie Sheen. This is a subject I feel ambivalent about, as I suspect he’s a man who is actually having some sort of psychotic episode, and I think the most ethical response is to let him alone to get whatever help he needs. Instead, we provide him a 24-hour-per-day microphone for more utterances that may be profoundly embarrassing and painful for him down the road.

But, then, he does have a history of violence toward women, and his utterances are genuinely astonishing, and there’s no other popular culture event anything like him just now. Our approach was to imagine what it would be like if a rehabilitation clinic were to open based on Sheen’s philosophy, and we wrote up a pamphlet for the clinic. As uncertain as I am about the subject, the resulting pamphlet, collaboratively written, was, I think, genuinely funny, especially Sheen’s method for recovering from addiction, described in this way:

I suppose we’ll find out soon enough what others think. Winstead will be posting all of the satiric pieces created by the class on her web site, and is inviting commentary from her readers; several are up already, to mostly supportive responses. But Winstead, because she does political comedy, is also a lightning rod for trollish behavior, and some of her commenters are especially vile — often calling her disparaging names (one that starts with a “c” is unnervingly common).

And so there is already a comment on one of the posts, a mock magazine cover called “American Petriot: The Voice of Reason for American Pet Owners.” I have retained the all-lowercase spelling, as it captures what seems to have been an author in such a rushed need to express his disgust that he could not be bothered to us the shift key: “this is the worst thing i have ever seen (and i’ve seen a lot); please kill yourself.”

And such is the way of the world. Satire does demand a response, as Winstead said. But it’s worth remembering that sometimes that response is an angry, anonymous voice telling you to shut up.

Don’t be a hack: Writing political satire with Lizz Winstead