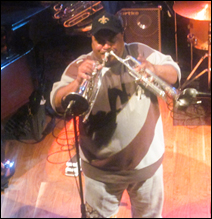 There are a few parades that will ruin parades for you. I presume the Brazilian Carnival parades will, but I have never seen one live. The Coney Island Mermaid Parade is marvelous, and leaves you sniffing in contempt at other parades, where the costumes aren’t nearly as good. And, of course, there’s Mardi Gras.

Properly, there’s an entire carnival season, which starts on 12th Night and goes all the way to Fat Tuesday, and there are parades the entire time, some big, some small, some in the city, some of the best in the suburbs. None happen in the French Quarter — well, one, the decidedly adult and mostly pedestrian Krewe du Vieux. There isn’t as much drunkeness at most parades as one might expect, and very little spontaneous nudity. Quite a few parades are, in fact, family affairs, and the most common site at them is children riding on the shoulders of their parents, crying out “Hey mister, throw me something!” as a parade float passes.

And every one of these parades will ruin other parades for you. The costumes are extraordinary. The floats are awe-inspiring. The people in the parade give you gifts, from plastic beads to hand-made knick-knacks. And the music is the best in the world. I feel now as I do every year at this time: Why am I not in New Orleans? And I was, once upon a time, before a hurricane kicked me out. But that makes this time of year especially melancholy. I still wear the beads, but there is no parade to wear them to. And if if there were, parades in Minnesota tend to be rather desultory affairs. Nobody dressed in feathers. Nobody hands out coconuts. Nobody throws beads.

At least there is the music, thanks to the Dakota Jazz Club and Restaurant. The club has made a regular habit of bringing New Orleans musicians to town, and Sunday night the venue was festooned with beads. Everybody seemed to be wearing purple or gold beads, the colors of Mardi Gras. They weren’t piled around anybody’s neck like a gang of Burmese giraffe neck women, which is what you’ll generally see at Carnival, but it was close. And the music, first by pianist Jon Cleary, later by the Dirty Dozen Brass Band, was just right.

I had not heard of Cleary before last night. The Dirty Dozen Brass Band identified him as being from London, but I think they meant London as a synecdoche for England, as Cleary is from Cranbrook, which is a very tiny town in Kent, a stone’s throw from the fame White Cliffs of Dover. He’s an amiable looking man with a face like a well-worn shoe, and Sunday night he had it topped with the sort of newsboy cap Bruce Spingsteen used to wear back when his stage costume consisted of a T-shirt, a leather jacket and a beard. For whatever reason, Cleary moved to New Orleans and decided to become a pianist in the tradition of Professor Longhair — I presume his reason had something to do with how extraordinary the music is. Composer Allen Toussaint called it “a mambo rhumba boogie thing,” and that’s about as good a definition as I can produce. Longhair’s style of piano playing combines rhythm and blues with a Latin rhythmic sensibility and a great love for rolling transitions borrowed from barrelhouse piano playing.

Cleary does this style about as well as anybody, and he and his band played through a selection of New Orleans rhythm and blues and funk classics, starting with Professor Longhair’s own “Go to the Mardi Gras,” which advises people to head over to St. Claude and Dumaine to see the Zulu parade, which is good advice, as they’re the ones who hand out coconuts. Cleary also did a number by Fats Domino, who recorded about a block away from St. Claude and Dumaine on Rampart at J&M Studios, and also like to throw street names into his songs — Domino recorded what is arguably the first rock and roll song ever, “The Fat Man,” in 1949, where he sings about standing on the corner of Rampart and Canal looking at girls — sometimes it seems every single song written about the Crescent City takes place in about a seven-block area.

Cleary performed Domino’s “Blue Monday,” in which the singer complains about the entire week, but for Saturday, when he gets to have fun. Even Sunday is suspect, because Monday is right behind it. From my experience, this is not a typically New Orleanean song; my coworkers sort of treated every single day like it was Saturday. If they showed up at all, they were often drunk, and if they weren’t drunk, they wouldn’t bother showing up. But the song is about as definitive an example of Fats Domino’s piano playing as I can think of, with his walking baseline, which he pounded out with a mighty left hand, and his machine-gun eighth-note chords on the right hand.

But as much as New Orleans is known for its piano playing, it may be even more famous for its brass. After all, you don’t really see people marching in the Mardi Gras parade pushing a piano in front of them. No, it’s marching bands, and there is a lot of brass that goes on. It’s hard to imagine a New Orleans without brass — they play at weddings, at funerals, and they lead the second line in the parades. But, believe it or not, there was a time in New Orleans where the tradition seemed to be dying, in the late ’70s, when the Dirty Dozen Brass Band began playing — and they get about as much credit for its revival as anybody.

They’re definitely a party band, as I shall detail, and as their name, which sounds like it could be a Clint Eastwood movie, suggests. But they’re also superb, and idiosyncratic, musicians — if you listen to old New Orleans R&B records, there’s usually a strong brass section, but it often fulfills the same sort of function as a bass guitar, rhythmically playing through the notes of a chord to create a sort of framework for the rest of the instruments to sit atop. The Dirty Dozen were, and are, far more adventurous, drawing from bebop on one hand, leading to unexpected, angular brass lines that stray far from the melody, and New Orleans funk, with its combination of Latin polyrythms and military marching band precision.

They put this to the service of music that in unabashedly meant to be danced to, and the band brooked nothing else. They repeatedly demanded that the audience at the Dakota rise from their chairs and dance; they dragged audience members onto the stage to shake a leg, and at one point trumpeter Gregory David grabbed a pocket trumpet and marched into the audience with it, picking out pretty women and playing directly into their cleavage, using a plunger to cause the trumpet to make salacious “wah wah” noises. At one moment, a conga line broke out, led by a woman with a parisol, and it was something to see — to put it gently, the audience members at the Dakota were not trailed terpsichoreans, but there was something heartening about seeing so many people who couldn’t dance nonetheless attempting it. Then, at the climax of the show, trumpeter Efrem Towns played two trumpets simultaneously, which seems like a magic trick. 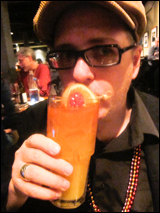 One final note: The Dakota offers one cocktail that is legitimately New Orleanean, its  version of a rum cocktail concocted at Pat O’Brien’s on Bourbon Street and called, either without irony or with too much irony, the Hurricane. Pat O’Brien’s version is quite sweet — I always found it too sweet, although it was the last drink I had before Katrina forced me out of my home. But if you’re going to listen to New Orleans music, you might as well have a New Orleans cocktail. I actually found the Dakota’s Hurricane to be better than Pat O’Brien’s — it wasn’t nearly as sweet, and the fruit juice was fresh and plentiful. It also didn’t seem nearly as alcoholic, as a single drink at Pat O’s has a reputation for putting the drinker out for the night. It’s sort of a pity, too. I don’t feel nearly drunk enough to show up for work today.