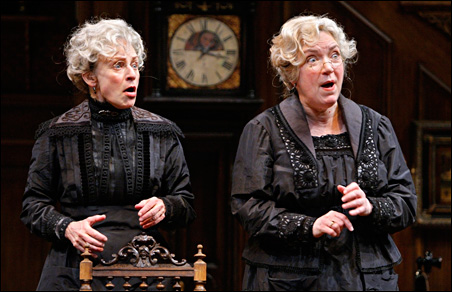 Photo by Michal Daniel
Sally Wingert and Kristine Nielsen in the Guthrie production of “Arsenic and Old Lace.”

We’re coming up on a crossroads for American theater. We’ve been working under one model of creating theater for a while now, and it proved to be a successful model, but its time is coming to an end. The rise of the nonprofit created a professional class of theatermakers — albeit almost entirely administrative. It also created a huge number of institutions that require enormous finances to support, especially for those theaters that maintain a space year-round. The largest single expense many of these theaters have is rent and, by extension, the people that benefit most from this particular approach to theater are landlords.

To an extent, this has benefited actors, but that extent is limited — the number of Twin Cities theaters that pay actors anything more than a pittance is passingly small, and the number of Minnesota actors that can make their living exclusive on the stage, if gathered together for a party, could probably fit into a booth or two at Nye’s Polonaise Room. Playwrights, who, after all, are the ones who actually make the plays, have not benefited at all. It is almost literally impossible to make a living as a playwright in this country. Even playwrights with Broadway shows make far more money writing for television or film. It’s a peculiarly lopsided system, and I don’t know that it has been terribly good for American theater.

For one thing, it is abominable for the development of new plays. It doesn’t matter how terrific a playwright you are, it’s virtually impossible to tell how a play will do onstage until you actually put it on a stage; the workshopping approach can’t replace the experience of actually watching an audience react to a full production. But most America plays only ever get one production — theaters aren’t much interested in new plays unless they are premieres or runaway successes. This means that new plays don’t get any chance to stretch their legs in front of an audience, and, when the playwright sees how well or poorly it works, get rejiggered for the next production. A play will live and die in the three weeks it has onstage, in the only production it is ever likely to have, which effectively gives new American plays the lifespan of a mayfly.

At least the old for-profit system, has a way of addressing this. Broadway productions, in particular, began with extended out-of-state previews, and by the time the play arrived on the Great White Way, it was seasoned. And the producers had committed to a longer run, which gave a chance for stranger and less-immediately-accessible work to find its audience. Without such a system, “Waiting for Godot,” among others, would be forgotten in America. But nowadays, a playwright will labor over a play for a year, and, if he or she is lucky, see it mounted for a few weeks, which will net them maybe a thousand dollars, and then that will be the end of it. This seems to be a system designed to discourage the writing of plays.

It will end soon, though, and nobody knows what will replace it. Look around in theaters — the audience is aging. Somehow these legacy theaters built this audience in the ’60s and ’70s, and they have structured themselves around keeping them. But people don’t keep forever; instead they age and die. And, for the most part, there isn’t a new audience coming up to replace them. Sure, there are some black box and cabaret theaters that have a younger audience, but in my 10 years of reviewing in the Twin Cities, I have only seen these filled when they produce plays for a really targeted audience, such as plays pitched at ethnic or racial minorities. And that audience is necessarily going to be limited, as extraordinary as these theaters may be.

There is no general audience for theater among 20- to 40-year-olds — it’s an entire generation that has never made it a habit to go to plays. Unless somebody can figure out how to get them into the theaters, the institutions will crumble, and all that will remain are theaters that deliberately target a much smaller audience. Perhaps this will be what will happen — we may be looking at a future of theater as an avocation where plays perform entirely to audiences of a few hundred. Or it may be that somebody will figure out how to make theater vital again, and suddenly there will be a rush of young people to see plays, which would cause a revolution in American theater. Whatever we’re doing now, and whoever is doing it, will be cast out on their ears, while whatever is being done to bring in new audiences, and whoever is doing it, will be handed the keys to the old edifices. It’s either that or shutter the doors.

I think it’s possible. The Fringe Festival does quite well, and the audience for it tends to be much younger, although it’s built on sort of an art-crawl model that I don’t think could be sustained year-round. Still, it suggests that younger audiences don’t necessarily find theater an anathema. But I’ll be blasted if I know what will get them into theaters on a regular basis.

Honestly, it can be a little discouraging. Because if young people won’t see a play like “Arsenic and Old Lace,” currently playing at The Guthrie, what the hell will they see? I know, I know, Jospeh Kesselring’s play dates back to 1939, and so it has the smell of mothballs about it. It also remains one of the funniest plays ever written, a nearly perfect screwball machine about a harried theater critic and his family of murderous psychopaths. It’s age shouldn’t be a factor — we’re dealing with a generation of young adults nowadays that has gleefully reappropriated needlepoint, after all, and who will turn out in droves for he forthcoming film adaptation of “The Hobbit,” which was written in 1937.

And the Guthrie’s production, directed by Joe Dowling, is about as good a production as one could hope for. It’s built around supremely eccentric performances by Sally Wingert and Kristine Nielson, who play a pair of mad aunts who have taken up poisoning strangers as a hobby. They fawn over each other, and dither, and hurry around their apartment with a hurried shuffle, and every one of these gestures is a precise comic act, at once a satire of little old ladies and a celebration of them.

They drive their doting nephew Mortimer into a bewildered frenzy, and this is an unenviable role for anybody to tackle, because it was played by Cary Grant in the 1944 film adaptation, then at the height of what proved to be his genius for light comedy. But Jonas Goslow is terrific in the role — he’s a tall, lean man, and makes much of his physicality, the events of the play literally bending him into a series of exaggerated comic poses, like an alarmed rubber band. He plays frantic beautifully. There is a scene in the play that contains one of the most famous double-takes in history, when Mortimer first discovers a body in a window seat. Cary Grant played it large, head snapping and eyes bugging. Goslow underplays it, responding very slowly with an elegant, uncertain spin, and it works just as well. He’s a very different Mortimer than Grant was, all splayed, lanky limbs, excited stammers and impotent threats — it’s as though James Stewart had gotten the role instead of Cary Grant.

So I don’t know what to say. I just don’t know. “Arsenic and Old Lace” should be a dead certainty, the sort of play that will get anybody into a theater, every time. Perhaps it is, and I simply went on the wrong night, but when I saw it on Wednesday night, the audience was mostly gray. If there was somebody there under the age of 40, they were hiding, perhaps having ducked under their seat to check their smartphone for the latest tweets from their friends.

But I suppose I have never really understood my generation, or the one that has followed it, at least in regards to theater. I’m one of the few 40-somethings that came up attending plays regularly, and, like others of my generation that this describes, I also went into theater as a career (such as it is; I should have gone into administration, but instead chose writing plays). I don’t know what the future holds for American theater, whether it will rise from its ashes or become a connoisseur’s pleasure, created by amateurs for the enjoyment of a few hundred dedicated audience members. Whatever the case, if it’s a future in which “Arsenic and Old Lace” can’t find an audience, I am not sure I shall care very much for it.