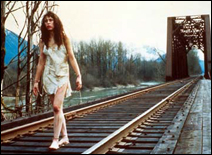 Courtesy of ABC
A small town with a secret: David Lynch and Mark Frost’s “Twin Peaks”

We arts writers sometimes seem like we’re slaves to the calendar. This is understandable. After all, we are newspeople, albeit newspeople who race to the scene of wine-and-cheese afterparties instead of shootings or fires. But we are newspeople nonetheless, and news is defined by the new.

So it is that we plan out what we will write about based on what exhibits are about to open, or what books are about to be released, or what celebrity just came to town and has 15 minutes to chat in a hotel room downtown. I’ve always felt this was unfairly limiting. Arts is not like news. It has permanence. Once a book is written, it is forever available. Once a piece of work goes into the permanent collection in a museum, it’s always on hand. But we arts critics frequently overlook these pieces in our rush to get to the latest gallery opening, which makes us seem mad for novelty, like a person who can’t wait to leave the current party to go to the next one. Which does, in fact, describe me, so, you know, fair is fair.

But you may have noticed that every so often I like to take a moment to look at some work that’s been around for a while. Today will be one of those days.

I’ve been watching “Twin Peaks” again. It’s available on instant view on Netflix, and, because it’s a rather unique show, and because it has David Lynch’s imprimatur on it, this supernatural crime tale probably has been written about as much as any television show. It just turned 20 last year, which brought about a new round of critical examination, as we arts writers long ago learned that we can treat anniversaries like new events.

I’d like to do what regional writers always do, and make the story local. The show has a lot of Minnesota in it, and not simply because it’s set in a northern mill town on a river, which is actually the towns of Snoqualmie and North Bend in Washington State, but could be any Minnesota town that borders Canada. No, the show was co-created by Mark Frost, whose official biography has him born in New York and raised in Los Angeles. What’s left off Frost’s biography is his time in Minnesota, which was sizable — his father, Warren Frost, was a faculty member at the University of Minnesota while pursuing a Ph.D. in theater. (Warren would eventually become the artistic director of the Chimera Theater in downtown St. Paul, and was a longtime teacher at the University.) As a result, Mark Frost attended high school here and interned at the Guthrie. As an adult, Frost spent several years writing for television, penning two episodes of “The Six Million Dollar Man” but quickly decided to return to Minneapolis, taking a job as a literary associate at the Guthrie for three years and pursuing a career as a playwright.

Frost eventually returned to Los Angeles, writing for “Hill Street Blues” and eventually getting paired with David Lynch. I am not sure precisely why the two were linked, except that, as a result of “Blue Velvet,” Lynch was then seen as someone who made deranged crime films, and Frost had penned two horror films, “Scared Stiff” and “The Believers.” Additionally, it had probably become obvious to studio heads that Lynch had no interest in narrative at all. Lynch had started off as an a visual artist, and he seemed to approach storytelling as a visual artist might, as a meditation on moods and textures and themes. Lynch’s most recent film, “Inland Empire,” abandons narrative altogether, but he had been gradually giving up traditional storytelling for years. Nobody who wants to make any money at filmmaking can stand for this sort of experimentation, so it might be that studio heads though having Lynch collaborate with Frost, a more traditional storyteller, would be a good idea. Frost could provide the shape of a story, and Lynch could fill it in with typically Lynchian details.

With “Twin Peaks,” the studio heads wound up with something far odder than they must have expected. Superficially, it’s the story of a young girl’s murder in a small town, with a soap opera’s interest in how this event exposes the town’s many secrets. But one of those secrets is that Twin Peaks is haunted, in a manner of speaking. There is an ancient evil in the woods that preys on people, indulging in occasional orgies of violence and degradation. The details of this are doled out obliquely, in a series of dreams and abstract messages: “The owls are not what they seem,” we are told; a dwarf dances in front of a red curtain while a dead girl whispers secrets into the ear of FBI Special Agent Dale Cooper, played by Kyle MacLachlan as a sort of proxy for Lynch himself. MacLachlan carries a tape recorder with him everywhere, and constantly speaks into it, an ongoing monologue of oddball observations borrowed from the sorts of things that Lynch himself would say.

MacLachlan is just one of many ways Lynch stamped himself across the show. The cast is fleshed out with his favorite actors, including Jack Nance, who starred in Lynch first film, “Eraserhead,” and Grace Zabriskie, whose grand guignol emotional meltdowns Lynch seems like he could have just filmed forever.

But Frost stamped himself on the film as well, and that stamp is very Minnesotan. For one thing, Frost cast his own father as the town doctor, Will Hayward, whose daughter, Donna (played by Lara Flynn Boyle), was the deceased girl’s best friend. Digging through the remainder of the cast, you find Minnesota connection upon Minnesota connection, either through the University of Minnesota or The Guthrie. Throughout the series, the cast watches a soap opera that often parodies the action of “Twin Peaks,” called “Invitation to Love.” These scenes were all directed by Frost, and the cast is full of former Minnesotans. There was Lance Davis, who got his MFA at the University of Minnesota. In three episodes, there is longtime Guthrie veteran Peter Michael Goetz, who you can now see in “Arms and the Man” — so, hey, there is at least one current local event I can tie in to this story.

And there are plenty of Minnesotans in the cast of the main show. There was Chris Mulkey as a sinister convict whose release from prison in the firsts season leads to all sorts of complications. Mulkey was a University of Minnesota graduate who spent five years on staff at the Children’s Theatre Company, and participated in two of Minnesota’s earliest independent films, “Loose Ends” in 1975, and it’s sequel, “Patty Rocks,” in 1988. Kennth Welch, who played the villainous Windom Earle in the second season, performed regularly at the Guthrie in the ’70s. If you grew up watching Minnesota theater in the ’70s and ’80s, watching “Twin Peaks” would sometimes give you the unnerving sense that you were watching the strangest local play you had ever seen.

Mark Frost is frequently left in the background of discussions of “Twin Peaks,” perhaps because the elements of the show that are the most distinctive are so typically Lynchean. But I think this is an uninteresting way to see the show. It was genuinely a collaboration, and part of the excitement of the program is the push and pull between Lynch’s urge to abandon narrative in favor of moody fantasias and Frost’s urge to force it into a story.

It’s this wrestling match that provides “Twin Peaks’ with its most distinctive quality, and the one that is the least Lynchean: The sense that we are watching a rather traditional small-town soap opera that has absolutely lost its mind.

Twin Peaks and the Twin Cities: The forgotten local connection to the classic TV show