I’d like to talk about a guilty pleasure this morning, but I hate that phrase. I don’t believe in guilty pleasures. Or, more properly, I think all pleasures should be a little guilty. But, then, I’m the sort of a person who doesn’t think a party is successful unless the next morning I find myself writing emails of apology, or emails demanding an apology, which may be why I am no longer invited to parties.

Well, no matter. It gives me more time to indulge in one of my more shameful pleasures: judge shows. There are a lot of them, and some deal with the really big moments in life, like divorce. I don’t watch these. The only sort of judge show I have patience for is strictly small claims.

We Americans tend to treat our system of jurisprudence as though it were some profound drama, with the courtroom existing as a sort of theater of truth and falsehood. It isn’t, of course — even with cases that deal with really big subjects, like murder, there’s a lot more plea bargaining than “Perry Mason”-style theatrics. The truth is that the law is, for the most part, a pretty quotidian undertaking, and I would venture to say that most lawyers spend their time drawing up contracts rather than investigating homicides. If there is any theater in law, it’s in small claims, and it is the theater of the quotidian.

Every single show I watch seems to revolve around the same few basic cases. Most commonly, there are cell-phone cases, which are always the saddest. Somebody bought a cell phone for somebody else and ended up having to pay thousands of dollars in calls that the other person refused to take responsibility for. There are also defaulted loans, and bad tenants, and bad roommates, and minor car wrecks — these pop up now and then, but mostly, the subject is cell phones. I can’t pass the display of Android phones at an electronic stores without flinching as a result — each one is a possible court case.

Small claims is, by definition, about small amounts of money. But it isn’t money the litigants are after. No, usually they feel they have been misbehaved toward in some manner, and want to air their grievances, and that’s why I like judge shows. It’s the courtroom of hurt feelings. Some TV judges indulge this, and some have no patience for it, but, sooner or later, somebody is going to lose it on one of the shows and wander off into an agonized tangent about their fractured relationship with whomever they are suing, or whoever is suing them. How exciting!

Judge Judy is the one who has no patience for this, but, then, she has no patience for anything. There has probably never been a crabbier woman on television than Judith Sheindlin, and it has served her well — she’s enjoys a daily audience of 10 million, including me. The moment somebody starts bellyaching, Judy shushes them with Yiddishisms. “Sha!” she’ll scream, and you half expect her to follow it with “shtil, makht nisht keyn gerider!” like the most terrifying Jewish grandmother ever. This inevitably leaves the complainer perplexed — after all, why else are they in small claims but to have a forum for their complaints?

Not in Judy’s court. No, you don’t watch Judy to see complainers complain, you watch Judge Judy for the genuine pleasure of watching somebody tell them to shut up. “You, sir, are an idiot,” she’ll declare to a startled litigant. You wouldn’t want to be in Judy’s court, but if you’ve ever gotten sick of hearing somebody go on and on about picayune problems and wished you could just tell them to shut it, well, Judy can be a lot of fun to watch.

If you’re watching judge shows because you have an interest in the law, you’re in the wrong place. Judy seems to choose her case based on who annoys her the least, but nobody has less interest in law than Judge Greg Mathis. The show starts out sounding like it is going to be about social issues, as the introductory voice over tells of Mathis’ troubled youth. And once in a while, Mathis will surprise a young litigant by picking up the tab for his college education, which isn’t the sort of thing you imagine Judge Judy doing. But that’s not really the subject of Mathis’ show. No, his primary concern is with liars.

A case on Mathis’ show will inevitably be decided based on who he thinks is lying. And it doesn’t matter what the lie is, the moment he thinks you’re dissembling, that’s all she wrote. I have seen more than a few astonished litigants find themselves on the losing end because they got confused and misspoke. “You are a liar!” Mathis will howl at them, and down comes the gavel, and it’s on to the next case.

But Mathis can be pretty indulgent with those in his courtroom. He likes gossip and will encourage it, riffing on it like an amateur-night comedian. He even has his own audience in the person of his longtime bailiff, Doyle, who spends half the show doubled over in paroxysms of hysteria. I am of the opinion that Doyle has the best job on television, but, then, I am curious about all the bailiffs. Judge Judy has a 190-foot yacht called “Her Honor.” Does she ever invite her bailiff, Petri Hawkins-Byrd, for a cruise? Maybe she doesn’t have to. Hawkins-Byrd styles himself as “the world’s richest bailiff,” and there can be no doubt that’s the truth. He probably own his own yacht.

My favorite judge is Joe Brown, a sleepy-eyed fellow with a huge mustache and a startling past: He presided over James Earl Ray’s last appeal for the murder of the Rev. Martin Luther King, Jr. It’s hard to imagine what the Joe Brown of that case was like, as, just now, he runs the loosest courtroom on television. Joe Brown’s show isn’t so much a trial as it is a free-for-all, with litigants running their mouths about any old thing, shouting each other down, and sometimes getting into loud arguments with the judge. Judge Judy will chastise people who show up in her courtroom underdressed, but the standard uniform for Joe Brown’s show seems to be a fashion I like to call “Whatever was lying on the bedroom floor when I woke up.” Joe Brown doesn’t care — he sometimes seems so unconcerned that you wonder if he might have dozed off in court, and the few times he gets irritated with the behavior of litigants, it is possible to wonder if his annoyance doesn’t stem from having been woken up by their screeching. 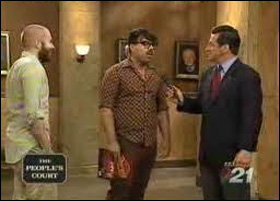 There is one judge who cares about the law — Judge Marilyn Milian, the frankly gorgeous heir to Joseph Wapner’s “People’s Court.” She’s careful to explain to her litigants what the law has to say about their case, even being cautious to identify the specifics of the laws based on individual states. But nobody watches it for that. There are precisely three pleasures to “The People’s Court,” and they are as follows: Marilyn Milian is as quick to speak Spanish as Judge Judy is to speak Yiddish, and will often chastise those in her courtroom with rapid-fire Spanish proverbs. “We have a saying,” she tell somebody. “A perro flaco, todo son pulgas!” Oh yes. To a skinny dog, all are fleas. Thanks, Judge.

Secondly, the show is produced by Harvey Levin, the grinning, gossipy founder of TMZ, and he likes to hang out in Manhattan Mall during the show’s breaks and ask passers-by what they think about the case, and then mock them for their answers. If I am ever in the former Gimbel’s building at the right moment, I will certainly seek out Harvey to put my ignorance of the law on full display for him. Usually you have to be a celebrity to get him to express any interest in you.

The best thing “The People’s Court” does is bring the litigants together at the very end to discuss how they felt the case went under the watchful eye of Curt Chaplin, who also introduces each case with punning titles in a mock-serious voice. Chaplin often seems to have nothing but contempt for the people who stream out of Judge Milian’s court, openly rolling his eyes at them when they protest the judgment. He was also on hand for one of the funniest moments on the show, when a frazzled, mustached man named Joe Somar said, “I just feel emancipated right now … it’s hard being me.” “What’s the hardest part about being you?” Chaplin asked.

It is impossible to feel guilty about enjoying something like that.