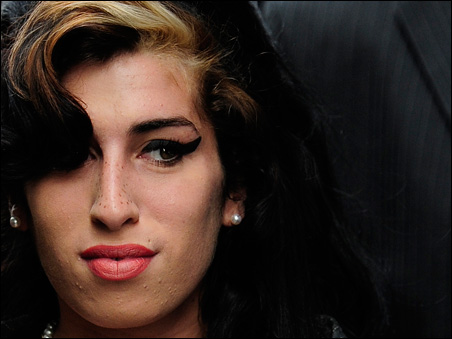 The big news in the arts this weekend was the death of soul/jazz singer Amy Winehouse. It happened about the same time as the horrific attacks in Oslo, and some on social media seemed to think there was a competition between the two events, as though every tweet about Winehouse was wasted and could better have been spent tweeting about Oslo. As though heartbreak is a limited resource, as though if we’re spending it on a dead pop star we have less to spend on the Norwegian dead.

This is to be expected. Although we don’t yet know the cause of Winehouse’s death, it’s very possible drugs were involved. She was, after all, perhaps more notorious for her tabloid-friendly lifestyle as she was known for her music, and the two never seemed very far apart. She first came to the public’s attention with her song “Rehab,” in which she defiantly sang of her refusal to get help for her addiction, a marvelous soul song which now contains two terrible ironies. The first is the following lyric:

In fact, Winehouse’s father, Mitchell Winehouse, a taxi driver from the London suburb of Southgate, has been public about the severity of Winehouse’s addiction. Three years ago, Mitch Winehouse went directly to the tabloids to tell them that his daughter had contracted emphysema and addressed her drug-using friends directly, telling them that her continued usage would certainly kill her.

It may be this sense that Amy Winehouse contributed to her own death that causes some to feel any grief spent on her is grief wasted. I suppose this is understandable, and you certainly can’t force anybody to mourn, although there is much to mourn here. Winehouse was a singular talent with a rare, distinctive singing voice. She made marvelous music, and when pop songs make use of jazz and soul idioms —- and many do nowadays — we can trace that welcome influence directly to Winehouse.

But there is another reason I think Winehouse deserves our compassion, rather than scorn, and it is hinted at by the second terrible irony in the song “Rehab,” to be found in the following lyric:

I ain’t got seventy days / ‘Cause there’s nothing, nothing you can teach me / that I can’t learn from Mr. Hathaway

Here, she refers to the great soul singer Donny Hathaway. It’s likely when Winehouse wrote that lyric she was referring to his music. There has long been an avid soul scene in England, and Hathaway may be better-known there than he is here. But Hathaway also had a tragic life that culminated in a youthful death — he leaped out a window in 1979, at age 33. And Donny Hathaway and Amy Winehouse shared something else as well: depression.

With Donny Hathaway, his depression was coupled with paranoid schizophrenia. Toward the end, he was convinced that he was targeted for assassination by “white people,” and claimed he had hooked his brain up to a machine. With Winehouse, there was nothing so florid. Her depression is said to have worsened with the death of her grandmother in 2006, and seems to have been a constant in her career.

Here are a few facts about depression:

There’s a strong link between depression and substance abuse. I’ve seen studies that have as many as 30-60 percent of people with severe depression also having concurrent problems with substance abuse. Thirty percent of cocaine abusers meet the diagnostic criteria for bipolar disorder. And depression is exceptionally dangerous when untreated. The World Health Organization estimates that 850,000 people die each year from causes that can be directly linked to depression.

Treatment can help, but comes with no guarantee. A combination of antidepressants and psychotherapy has proven to be helpful in 60-80 percent of cases, but that still leaves 20-40 percent of people suffering depression for whom treatment fails in some way. With Winehouse, she doesn’t seem to have given treatment a real try — she actually did go to rehab a few times, but reportedly left early. And even if she had lasted the program, proper treatment for depression and substance abuse is ongoing.

Should she have committed herself more to her treatment? Well, certainly, but I try to have sympathy here. Winehouse described herself as bipolar, and, having known a few people with bipolar disorder, I know how their decision-making skills are compromised during the manic phase. Even without depression undermining whatever resolve Winehouse had, addiction is awesomely hard to address, and most addicts must make multiple attempts before they see any ongoing progress.

I find it useful to think of depression as a potentially fatal illness, the same way one might look at an especially fast moving cancer. With depression, the end sometimes comes with a bullet or a fall, rather than with metastasizing cells, but in the end, it’s the same thing: It’s the disease that killed them. And with some people with depression, that end comes from a desperate sort of self-medication. This is particularly true in the arts, and especially pernicious in music, where hard-drinking and partying is seen as part of the lifestyle.

In fact, there has been a lot of talk in the last few days of Winehouse entering something called the 27 Club. This is a group of rock musicians who died at the age 27, including Jimi Hendrix, Janis Joplin, Jim Morrison, and Kurt Cobain. I don’t find the coincidence of their age especially meaningful, but there is some meaning in this collection of youthful deaths: Every single one of them likely suffered depression. Of course, it’s risky to engage in armchair psychoanalysis, and Hendrix, as an example, was never diagnosed with bipolar disorder. (He did, however, author a song called “Manic Depression,” after being told by his manager that he sounded like he suffered from it.)  But with Kurt Cobain, according to his cousin Bev Cobain, he was indeed diagnosed as bipolar. And if we look outside the 27-Club, to other rock and roll deaths, we start to see a disturbing number of deaths from what is clearly depression, including Lush’s Chris Acland, protest singer Phil Ochs, punk rocker Wendy O. Williams, and Joy Division’s Ian Curtis.

I expect that people who won’t shed a tear for Winehouse see her as the agent in her own death, and this is why they compare her to Oslo, where a man with a gun killed 80 or more people, none of whom had done anything to deserve their fate. But I see a killer in Winehouse’s death as well, and one that has moved through rock and roll history, and moves through the world. Depression leads to suicide in about 15 percent of the people who have it, and depression is the reported cause of over two-thirds of the deaths by suicide each year. It’s difficult to determine how many people with depression die from related causes, such as substance abuse, but the toll is enormous. Worse still, it can be very difficult to get diagnosed and treated for depression without insurance, and even with insurance, multiple studies show that most adult Americans with mental disorders do not receive any treatment for their symptoms. According to British health economist Richard Layard in 2006, conditions were much the same in Great Britain, and I cannot find evidence they have improved.

So we can see the story of Amy Winehouse as being one of a drug addict who shrugged off every effort to help her and wound up with an entirely unsurprising early death, and I can see why this might not encourage sympathy or grief. Or we can see her as a victim of mental illness in a society that doesn’t understand or respond to mental illness with great effectiveness. Whatever the case, with the death of Amy Winehouse, we lost an enormous talent, and it shouldn’t pass without consideration and comment.

On the death of Amy Winehouse