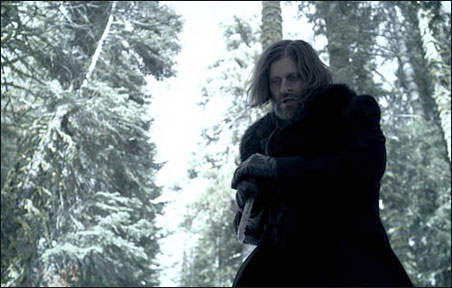 Courtesy of Anacapa Entertainment
Crispin Glover as William Foster, temporary Minnesotan and cannibal, from the 2009 film “The Donner Party”

Here it is, Halloween. And so, as MinnPost’s arts and culture writer, I have decided to take it upon myself to retell two lost tales from the murky byways of Minnesota history, the first of cannibalism, the second of madness, which seems appropriate. But be warned: Those with delicate sensibilities, those who easily fall prey to nightmares, and those who fall prey easily to terror — look away!

A Cannibal Founded My Township

About an hour southwest of Minneapolis, along County Road 40, is a muddy flat of land that, once upon a time, was a settlement that went by the rather grandiose and geographically suspect name of San Francisco. The founder was a fellow who had spent a brief amount of time in the actual San Francisco, a man named William Foster, who was also briefly employed as one of Carver County’s first commissioners. The township failed and Foster returned to California.

Oh, and did I mention that Foster once killed men and ate human flesh?

Foster had been a member of the ill-famed Donner Party, you see. This group headed westward in 1846 and became snowbound in Sierra Nevada that winter. They quickly ran out of food, and sent out a rescue party to travel 100 miles to Sutter’s Fort to seek help. The party got lost in a blizzard, and members of it began to die; the others cannibalized their bodies. Meanwhile, the members of the party they left behind also began to eat their dead in a desperate effort to survive. By the time all members of the Donner party had been rescued, 39 of the original 87 pioneers had died, including a number of children.

And where was Foster during all this? Well, Foster had a notoriously bad time of it. Early on in the trip, before anyone had started eating anyone else, Foster had handed a pistol to his brother-in-law, William Pike, and, in the transfer, the gun went off, killing Pike. But this event, in the grand scheme of things, was a rather minor incident for the Donner Party. There had already been a stabbing, resulting in one death, and a German party member had disappeared; later it would come out that the man had been robbed and murdered by two of his travel companions. When the party became snowbound, Foster agreed to join the group that was headed to Sutter’s Fort, a group that later received a melancholy sobriquet: Forlorn Hope.

As people died in this group, the survivors cooked them and ate them, but this didn’t seem to be enough for Foster. There were two Indian guides in the group, Luis and Salvador, and Foster suggested killing and eating them. Someone tipped off the Indians, and they disappeared in the woods, but Foster found them the next day. They were weak from hunger, and Foster murdered them. The group then ate their remains.

Foster was never charged in their deaths, and his fellow travelers claim he was insane from hunger, although, apparently, sane enough to suggest killing two outsiders, rather than simply anyone. Perhaps this is why he was offered the job of Carver County commissioner: With that sort of ruthlessness, he would have made an ideal politician.

Dr. Tanner, the Man Who Fasted

Dr. H.S. Tanner, a physician from Minneapolis in 1880, had a rather absurd theory: He thought that man was a hibernating animal, like bears, and he warned that people are often buried alive, when they are hibernating and appear to be dead. His cure for this was a strange one: cremation rather than burial. And he had a strange way of demonstrating his ideas. He agreed to fast for 40 days, under medical supervision and on public display in New York’s Clarendon Hall, to make his point. His fast was a media sensation, with the New York Times assiduously reporting on his progress, informing breathless readers that Dr. Tanner’s spirits were excellent, if his face seemed to be growing thinner. On the tenth day of the fast, one of the observers insisted that he had seen another observer pass Dr. Tanner something, perhaps food; his charges could not be proven, however, and he was shouted down by the other observers, as well as Dr. Tanner.

The event proved to be so popular that Tanner, et al., sold tickets to witness his fast for 25 cents. Other physicians sent Tanner letters describing their experiments with starvation, which mostly involved keeping food from animals to see how long it took them to die. Tanner suffered some stomach discomfort, which bothered him to an extent that he snapped at visitors, but was cured with hot water. Members of the medical establishment were certain Tanner would spontaneously die of heart failure during his fast, and many staked their reputations on the exact day when he would die. As he neared his 40th day, physicians then changed their minds, but declared that should he eat a hearty meal to break the fast, it would certainly kill him.

Dr. Tanner broke his fast on his 40th day with milk, watermelon, and a half a pound of beefsteak, and did not die, although he had lost almost 40 pounds. He instead began a lecture series, explaining to fascinated listeners that fasting was a marvelous cure for many diseases. Occasionally, he was challenged to fast again. In August of 1881, he is reported to have traveled to Amsterdam to fast again, and waited impatiently in a hotel room for one Mr. Croff, a Dutch physician who had challenged him. When Croff arrived, Tanner rushed to greet him with such speed that he lost his footing, tumbled down a flight of stairs, and died.

Or did he? An Akron newspaper from 1896 has Dr. Tanner dying in a fire there, and published a long obituary of the famous faster. Perhaps he had simply been hibernating until then.

Tanner’s fast set off a short-lived fad of fasters. In 1881, two people fasted in New Jersey, including a young woman named Lenora Eaton, who went without food for 45 days, then drank only milk, and then died. A fellow named Griscom fasted for 45 days in Chicago in 1881. In 1888, there were reports of an inmate in the Lancaster County hospital who went without food for 50 days. In 1891, according to news reports, a woman named Elizabeth McVey fasted for 43 days with Tanner by her side, and then died; Tanner was apparently no worse the wear for having died 10 years previously. Tanner repeatedly popped up in the news. The stories were always about fasting, or about him dying.

In 1897, 16 years after Tanner was supposed to have expired after breaking his head and a year after reportedly burning to death in a fire, a fellow named H.L. Kramer put out a $10,000 challenge that his contestant could outfast anyone. Kramer’s contestant? Dr. Tanner.

He may still be around. If you suddenly find yourself taken with the urge to forgo food, look around you to see if a gaunt man is by your side, offering advice, and, if so, thank Dr. Tanner, but tell him to be on his way.