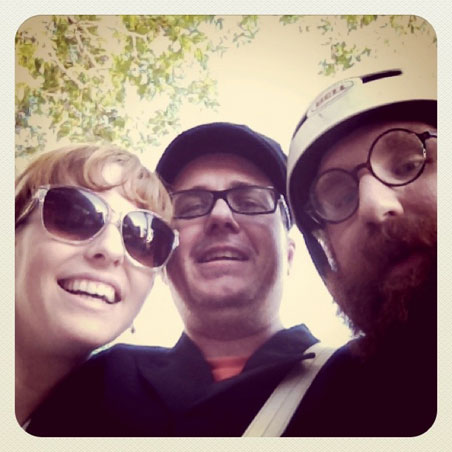 I am not sure precisely how you get declared to be a “man about town” nowadays. I’m one, but I suspect it’s mostly the result of the title of my column, and it’s a bit of a misnomer. The column should probably be called “Max Ducks Into an Art Gallery Wearing His iPod Earbuds and Looks Around for 25 Minutes Without Talking to Anybody.” Or “Max Sneaks Chocolate-Covered Gummi Bears Into Block E.”

Andy Sturdevant is often referred to as a man about town, and I think has come by that title legitimately. He’s social, and sociable, in a way that I have never quite managed, and he’s probably the single person I see most frequently at art events, where he hobnobs with the artists and has long, friendly conversations with just about everybody, while I duck over to the bar to demand to know if the vermouth is refrigerated. He cuts an easily recognizable figure, looking a bit like a simplified cartoon of a 1930s Communist. He has a marvelous, enormous red beard and wears perfectly circular glasses — I own a similar pair, but never wear them, as they tend to make me look like an astonished owl.

Sturdevant also has a taste for habiliment that, to Midwestern eyes, looks more like costume than everyday wear — an approach to couture that I share, although, when people see me, they sometimes erroneously believe that I am dressed like Elton John, who I presume is the only other person they can think of who dresses so brightly and yet is so very bald. Sturdvant favors tweedy suits and buttons that support liberal politicians who haven’t run for office in 60 years. This last summer, he went through a period where he wore what looked like the sort of clamdiggers and casual tops you might have seen on the yacht set, back in the 1940s, which he documented on his blog and which eventually blossomed into full-on ship’s captain’s uniform. The latter was likely in service of some art event or other, as Sturdevant is not just a patron of the arts, but a curator of events and frequent host. His is a lead I would like to see other local arts curators follow — I still don’t know why Olga Viso wasn’t wearing a pencil mustache when she introduced John Waters.

I mention Sturdevant because I saw him this last Friday at “Wits” at the Fitzgerald, and we shared a cab home. I asked about a show he regularly hosts at the Bryant-Lake Bowl, called “Salon Saloon,” and he told me the next one would be tonight. I have never written about the program, although, along with a previous band I was in, I was once a guest, and so I told him I would mention the show in my column. 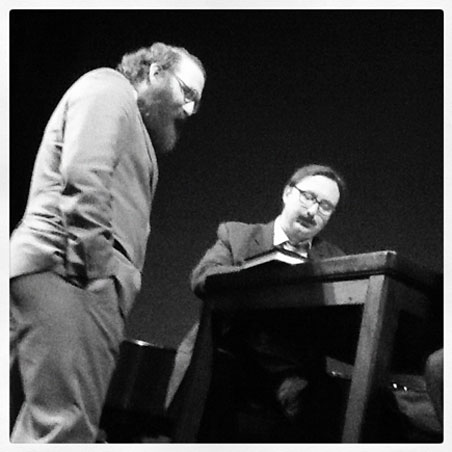 “Oh good!” he said. “We never have any quotes we can use for promotional material. Maybe we’ll get something from you.”

“I don’t know if I can be counted on for that,” I said. “My column is probably going to sound like this: ‘When I was 10, and living in England, my father and I traveled to London for the weekend, and there he gave me my first Warhol. Oh, and there is a guy named Andy who has a show. Anyway, as I traversed Hyde Park with my father, clutching my pop art watercolor …”

I shall try not to write that column today. “Salon Saloon,” which has been a regular live program for a half decade or more, is an eclectic, themed night in which Sturdevant brings a series of guests onto the BLB stage, either to interview them or to have them present something. It is very often fine artists who share the stage with him, although it can be just about anybody — at “Wits,” Sturdevant tried to get local singer-songwriter Chris Koza to commit to a December show. The night I performed at “Salon Saloon,” one of the other guests was Mike Haeg, who is probably best known for declaring his suburban home to be a separate city, called Mount Holly, and running himself, unopposed, as mayor of the town. Haeg spoke about a gospel recording artist named Merrill Womach, who was very nearly burned to death in an airplane crash, and who runs a successful business providing music for funeral homes.

So you can never be certain what will be on the bill at “Salon Saloon,” except that it will be unexpected and fascinating. Tonight’s program is called “The Fakes Show,” with topics ranging from forging art to forging identities, and will feature two artists whose work I much admired. The first is Lex Thompson, a photographer who favors odd, manufactured environments, such as abandoned theme parks, which he shoots with a studied carelessness. His images sort of seem like the sorts of pictures a tourist might take, except usually there would be people in the frame, posing next to, say, a giant dinosaur statue — in his pictures, there is nobody, and the dinosaur looks long abandoned. Also on hand will be performer Kimberly Richardson, whose work, as both an actress and a director, has tended toward characters who still take a childlike pleasure in pretending. Richardson is often canny enough to show both the charms and the dangers of this, as sometimes it can be a problem to be somebody with a loose definition of reality.

While we taxied homeward, I asked Sturdevant how audiences have been for “Salon Saloon.” “Selling out!” he told me.

“I don’t know if writing about the show will be doing you any favors,” I said. “I’m not sure if anybody actually does any of the things I suggest in my column, but there is a risk that you might end up with an overflow audience of upset 65-year-old MinnPost readers.”

He didn’t seem to mind taking that risk, but a word to the wise: If you’re thinking about going, reserve tickets. And, what the hell, wear a costume. If you have a fake beard and glasses, go as Sturdevant, and sit back and bask in the amount of pleasant socialization that suddenly becomes possible.