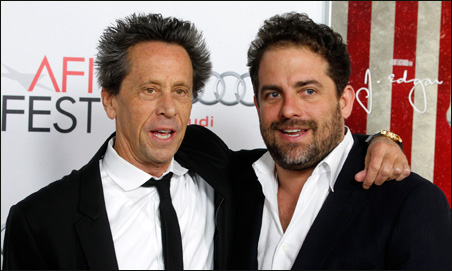 I love to write about the Oscars, but it’s the sort of thing that is only entertaining when there is a catastrophe. Left to its own devices, the Academy of Motion Picture Arts and Sciences will produce a show that is long, sober, tasteful, controlled and dull. It’s a show that is famously only memorable for its gaffes, and for the fact that film people, whatever their talents, are often lunatics and can generally be counted on to send activists up to accept awards on their behalf, or talk about nipples, or drop and do pushups. And, of course, there are the occasional moments of real mayhem — does anybody remember anything about David Niven hosting the Oscars, except that a man streaked behind him?

Usually we have to wait for the broadcast of the show for these moments. Not this year. No, here we are, months before the event, and catastrophe has already broken out. It’s like Christmas in July — in November!

I am sure many of you are already familiar with the circumstances that have led to both the producer and host resigning before the event has even begun, but, if you aren’t, here is a quick recap. For some reason, the Oscars this year chose as their producer Brett Ratner, a Hollywood workhorse who is best-known for the “Rush Hour” franchise that paired shrill funnyman Chris Tucker with martial arts legend Jackie Chan. Ratner is also regularly called in to direct big-budget sequels in established franchises. I’m not clear how he wound up with the Oscar production gig, except that he is something of a Hollywood insider, and lays claims to a lot of Hollywood friends. He’s also a bit notorious for a sort of smarmy, occasionally combative public persona, which revealed itself during a Q&A for his latest film, “Tower Heist.” Asked about rehearsing, Ratner offered a response similar to “rehearsals are for sissies,” but with the word “sissies” replaced with an even more appalling term that is derogatory to gays.

He got called on it, and deservedly so. I suspect Ratner was just trying to be comical, and there are an awful lot of people who make use of casual homophobia in a jokey way. It is, in fact, possible that Ratner has gay friends, and feels as though he is enough of an insider to toss off an epithet and assume everybody knows he’s joking. Or maybe he’s just a bully. It doesn’t much matter what your intentions are in this sort of circumstance; all you succeed in communicating is that you think it is funny to toss off anti-gay slurs.

To Ratner’s credit, he responded to criticism in about as good a manner as possible, issuing a full mea culpa, approaching GLAAD about working with them to address the subject of hate speech, and resigning from the Academy Awards. It’s impossible to know whether he’s genuinely chagrined or if this is pure damage control, but at least he didn’t go on the defensive and dismiss the complaints of his critics. We shall see what happens with Ratner in the next few years, and by his behavior we will know his seriousness.

But almost immediately his resignation caused another hole to open at the Oscars. Comedian Eddie Murphy, who currently costars in Ratner’s film “Tower Heist,” was slotted to host the Academy Awards, for whatever reason. Murphy responded to Ratner leaving the show by announcing he would not be hosting, offering up the explanation that he could not be certain how Ratner’s absence might affect the quality of the show.

There may be other reasons. First, Murphy has not shied away from viciously homophobic humor in his stand-up, most notoriously in his concert films “Raw” and “Delirious.” Admittedly, these films are somewhere in the vicinity of 20 years old, but the truth is that Murphy has never apologized for the comments in them. Further, had somebody released a film 20 years ago that contained blatantly racist or antisemitic humor, we would probably still expect them to answer for their comments, at least to see if they have had a change of heart. It is possible that Murphy didn’t want to be called on the carpet for his own homophobia. It’s also possible that Murphy didn’t want brought up an equally ancient incident in which he was arrested after picking up a transvestite prostitute, leading to months of tabloid claims that this was not unusual behavior for him. Whatever the case, the event with Ratner highlighted Hollywood’s still-ambivalent attitudes toward homosexuality.

The film colony was long one of the most accepting of gays and lesbians, but also insisted it be secret, and presented a swaggering public image that did not preclude mocking gays and lesbians in the films it produced. It’s disappointing that there are still traces of this in the film industry, but, then, despite what conservatives claim, Hollywood is really a microcosm of the larger world, and any unsettled homophobia that exists in the rest of America will find its mirror in the film industry. It is encouraging, at least, that we’re at a point when this sort of behavior is seen as an embarrassment, and there is quick damage control involving resignations and public apologies. When Murphy made his comedy concert films, nobody seemed bothered by extended homophobic screeds.

This has left the Academy scrambling for a new host, and I am quickly going to mention that the most interesting option is The Muppets. Jim Henson’s studio immediately began lobbying to have their creations take over the event. Besides the fact that there is inherently something delightful about having the awards hosted by America’s most beloved puppets, there are a few additional facts that make this a good idea. First, the Muppets will likely have a hit movie before the Oscars — they are about to release a new film, scripted by and starring Jason Segal of “How I Met Your Mother,” who was an unusually good choice to tap in the creation of this film. Additionally, the Muppets have been making all sorts of online media, and it has generally been terrific. The pump is primed, as they say, for a hit, and, barring the unlikely event of Segal having turned in a genuinely awful script, this should do very well at the box office.

Besides that, the actors behind the Muppets are now among the most seasoned improvisers in Hollywood, as has been repeatedly demonstrated by their guest appearances on daytime and nighttime talk shows, which generally deteriorate into exquisite chaos — something the Oscars would do well to have more of. And, like Murphy, the Muppets are Saturday Night Live alums, having been part of the cast the first season of the show and making regular guest appearances after that. Better still, the Jim Henson studios, where the muppets are stored, is on Sunset and La Brea in Hollywood, which is literally all of three blocks from where the Academy Award ceremony is held. Having them host would be part of a great tradition — when Ed Sullivan had to fill in for an absentee guest, he would call puppeteer Senor Wences, who lived right across the street from Sullivan’s studio.

Best still, the Muppets don’t have a history of making public homophobic comments, although they have, on occasion, engaged in transvestitism. But that’s another Hollywood tradition, and one I think the Oscars should celebrate.

An early catastrophe for the Oscars, and some possible new hosts