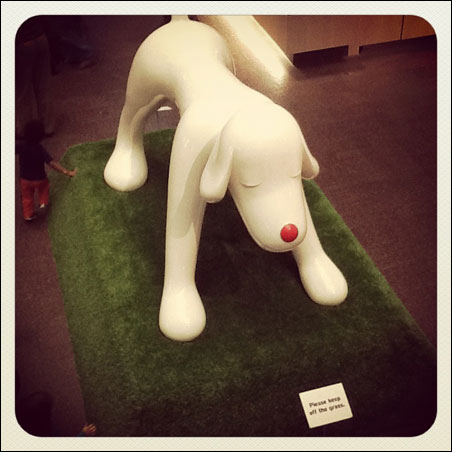 I was fortunate to grow up with a father who had a wide-ranging, eclectic taste in art. I grew up in a house that had a few pieces from the CoBrA movement, a few abstract expressionistic pieces, African ceremonial masks, Chinese sculptures, and a few pieces by local artists. One of these I smashed when I was a child, and later, at an exhibit, we met the man who created it, and my father made me apologize. He also had a reproduction of a print by Katsushika Hokusai called “The Great Wave off Kanagawa,” the first and perhaps most famous of the artist’s series of woodblock prints called “Thirty-Six Views of Mount Fuji.” It’s a bit hard to locate Mt. Fuji in the painting, which is dominated by a swelling, open-sea wave that prepares to crash down on a pair of boats. Fuji is in the background, a snow-capped point that peers over the horizon, and could perhaps be mistaken for another wave, except that waves don’t come in that shape.

My father also had an enormous, contemporary variation of the painting, and I don’t know who the artist was. Fuji was there, in the background, and there was a fisherman casting a web into a roiling ocean. Except it wasn’t an ocean, but an enormous, nude woman whose curves mimicked the swells of the sea. My father hung this in the entryway of our home in Minnetonka, and it was the first thing people saw as a result, which I think is good policy. What better way to greet a guest than to perplex them with art?

The Minneapolis Institute of Arts is currently showing an absolutely enormous collection of these sorts of woodblock prints, and contemporary updatings, as part of a show called “Edo Pop.” Most of the exhibition is given over to a style of print called ukiyo-e, or “pictures from the floating world,” a hugely popular art that was centered around Tokyo, then called Edo, starting at about the 17th century. It’s roughly comparable to the prints of Currier and Ives, although ukiyo-e was a bit more broad-ranging than the works of their American counterparts. Currier and Ives tended toward current and historic American events, along with festivals, bucolic scenes of nature, and the like. Ukiyo-e included pictures of popular actors, travelogues, Sumo wrestlers, and, as part of a grey market of semi-legal prints that are not particularly represented here, graphic images of sexuality, called shunga.

When Japan first opened to the West, these prints leaked out, sometimes in the form of packing paper used to ship goods, and Western artists developed, an masse, a collective Japanophilia that helped to kick-start modernism. There’s an entire section of the institute that pairs Japanese prints with European work, particularly by Henri de Toulouse-Lautrec, and the influence of ukiyo-e is unmistakable — the broad swashes of color, the flattened perspective, the use of bold outlining, the subtle caricaturization. There’s also an influence that is unintentional — ukiyo-e prints were sometimes spread across several pieces of paper, intended to be put on a two- or three-piece screen. Europeans would often only get one piece of a diptych or triptych, and it seemed to them that the Japanese were unusually bold in their composition, having figures burst into the frames of an image with seemingly no regard for balance. The artists of Europe were apparently eager for an excuse to break the rules of balance, and so all of a sudden there was a wildness in modernist composition that Japanese printmakers would actually have found quite unsettling.

That is, until they moved on to unsettling art of their own. The final two rooms of “Edo Pop” consists of contemporary art that directly or indirectly references these Japanese woodblock prints. An exhibit like this is rather overwhelming, and so one must choose where one wishes to focus one’s attention; I chose the contemporary pieces. There is, as an example, a series of images by Yoshitomo Nara, who produces cartoonish, childlike images of big-eyed waif and smiling white dogs; he has a series of images here that seem to slyly parody ukuyo-e prints — his Mt. Fuji, for example, has a child skiing down it. He also offers a picture of a courtesan with a breast exposed, and she reveals all sorts of piercings. She carries a towel that reads “No fun,” which the curators opine might be a commentary on prostitution. I sincerely doubt it. Nara is at least as much influenced by punk rock as he is by anything else, and “No Fun” is the name of a Stooges song that just about every British punk band covered.

Speaking of no fun, there is a magnificent cartoon that takes over the entire last gallery of the exhibit called “City Glow,” set on five screens that span an entire wall; a hexaptych that, had a single panel come loose and somehow made its way to 18th century Europe, wouldn’t have influenced the artists there, but instead destroyed them. The piece is a collaboration between Chino Aoshima, an artist from the genre called “superflat,” which borrows from Japanese comic books and graphic art, and a New Zealand-based animator named Bruce Ferguson. When I attended the exhibit, on Sunday, the room was filled with children, spilled over from the “Wizard of Oz” show playing at the Children’s Theater. They were obviously attracted by the film’s near-day glo colors and cartoon iconography, and their parents obviously didn’t know what these ankle-biters were in for. 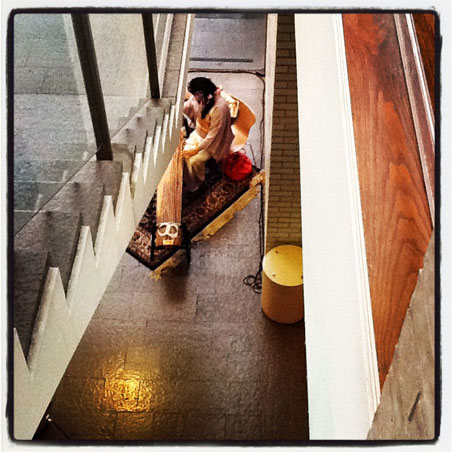 “City Glow” starts with a panorama cityscape, of sorts, except all the buildings have faces and sway like worms. Over nine minutes, the camera slowly recedes from the city, through a flooded forest and eventually into a blood-red cemetery, where various spirits wrap themselves around tombstones. These are intensely unsettling images, including trees filled with severed heads and a ghost surrounded by floating IV bags that link into her body through tubes. At the very end, a huge, spectral head appears on the screen and starts screaming, but instead of sound, bees spew forth from its mouth. One child, seeing this, shrieked, “There is AN EYE on her FOREHEAD!” Kid, that ain’t the half of it. Some parents whisked their children out of the room — a pity, as they missed the coda, during which a castanet-shaking pixie clears the screen and replaces it with a rainbow.

I appreciated that the exhibit ended with something so upsetting, and that it made it so appealing to children. It’s important for kids to learn early on that contemporary art is strong stuff, and may result in years of nightmares. How else to prepare them for the work of, say, Neck Face or Mandy Greer?

My only complaint is that this appears at the end of the exhibit. My father would have made sure it was the first thing anybody saw.