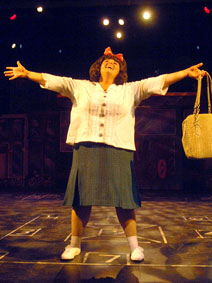 I don’t know how many MinnPost readers are going to be interested in going out and doing something arty this weekend — after all, there is a tryptophan coma coming, and it’s going to be a doozy. Enough turkey and we could get the governments of the world to grind to a halt, with the leaders kicking their shoes off, patting their stomachs and dropping off to sleep where they sit.

Heck, this could be a tactic in the ongoing protests — we’ll call it Occupy T Street. Instead of locking arms on college campuses and waiting for the pepper spray, or watching as the New York City police once again throw out your donated library, simply bring a nice breast of turkey with some well-spiced stuffing to the target of your ire. Then, when they drift off, take over. But, for heaven’s sake, don’t eat any of the turkey yourself, or your well-made plans will fade away as you find yourself entering and exiting consciousness as a commercial for a boxed DVD set of Red Skelton’s Thanksgiving Specials plays on television.

For those of you who have successfully avoided the turkey trap, here are two recommendations for this long weekend’s occupation.

You already know my interest in filmmaker John Waters, and it has been bemusing to watch him move from a sort of cult peculiarity (and an often terrifying one) to an avuncular charmer with a respected body of work. As far as I can tell, it took him completely by surprise, as he hasn’t really changed all that much (his Walker exhibit included a bomb-making room and glory holes in the bathroom). It’s mostly the result of one film, “Hairspray,” that detailed a hometown television teen dance program that fascinated him as a boy in Baltimore. The film became something of a family picture, despite its cross-dressing and trashy taste in fashion, and made the exceedingly unlikely move to Broadway as a musical in 2002. And suddenly Waters was — well, perhaps not respectable, but America decided his work was all in good fun, even though he still travels the country making jokes about transgressive sex acts and encouraging wild, disturbing revolutionary gestures.

There may be no more dramatic example of Waters’ absorption into the mainstream than the fact that “Hairspray” is currently at the Chanhassan Dinner Theatres, and will be until May. This is not to put down the dinner theater, which not only typically offers terrific productions but happens to be one of the few Minnesota theaters that can actually offer actors a living wage. But they do so by playing squarely to the largest audience they can, and the rule of thumb is: The larger the audience, the less experimental their tastes will be. And so somehow “Hairspay” has entered an extremely limited pantheon of “musicals pretty much everybody will like,” along with, say, “Oklahoma!” and “West Side Story.” That’s saying a lot for a filmmaker whose next most famous work involved an enormous crossdresser eating actual feces, and whose last film was so pervasively transgressive that, in order to get an R rating, it would have had to have been cut down to 10 minutes length. I can’t wait to see what other cultural provocateurs Broadway will next rescue. I imagine a musical version of “El Topo,” perhaps, or “Salo: 120 Days of Sodom,” because when films are this disturbing, shouldn’t they be shared with everybody?

While we’re on the subject, I saw David Sedaris speak at the State Theater a little more than a week ago, and was struck by the fact that his sense of humor — which has always been streaked black — has developed an impish, prankish quality. I am sure he knows he plays largely to a This American Life Crowd, which tends toward storytelling that is dry and a bit twee. He’s long been one of the defining voices of the show, but he’s neither dry nor twee, but instead sometimes viciously ironic and capable of startling moments of social trespass. He gets away with it, in large part, because his work has been often autobiographical, and we expect journals to be a bit outre — there’s a reason why both J.T LeRoy and James Frey were able to pass off their literary deceptions as autobiography, and its because we want autobiographers to spill the dirt.

But the fact that Sedaris has a mainstream audience doesn’t mean he won’t tweak it, and so his appearances have increasingly included breathtakingly foul jokes, inappropriate dedications when he signs books, uncomfortable quizzing of audience members, and short stories that are more lacerating than pleasant. And yet, like John Waters, and thanks to the miracle of theater, he has accidentally created a perfectly mainstream work. His long journal of working as one of Santa’s elves at Macy’s one Christmas, titled “The Santaland Diaries,” seems like it gets almost as many productions every holiday season as “A Christmas Carol,” despite the fact that it’s a document of misbehavior without the sort of redemption we thrust on Scrooge in his narrative. No, Sedaris’s employed elf alter ego, Crumpet, is a bit of an anarchic force, suffering though a humiliating seasonal job by doing it poorly, and behaving terribly when he thinks he can get away with it.

I can understand why it’s become a holiday classic — we sometimes need an antidote to the treacle of this time of year. And so Frank Theater has taken the responsibility for making this story an annual tradition, and will be presenting it at The Women’s Club, on the exact spot where (as I am sure the organization doesn’t like me repeatedly bringing up) Tiny Tim died. Happy holidays, each and every one of us!

Have yourself a transgressive little holiday: Two events for this Thanksgiving Day weekend