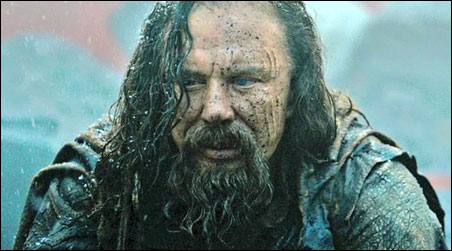 Photo courtesy of Relativity Media
Mickey Rourke in “Immortals,” Mickey Rourking it up

A few years ago I heard an interview with Russell Crowe, which I shall paraphrase. He was asked about “Gladiator,” and he opined that, although it took a drubbing from a few critics, its popular success would lead to a slew of similar films, and after watching those, in retrospect, we would realize how good “Gladiator” was.

Well, here’s to you, Russell Crowe. You may be best known for throwing telephones and menacing electronica musician Moby, but, if you choose it, you also can claim a career as a prophet. Because we are in a new golden age of sword and sandals movies, and they make “Gladiator” look decidedly stately by comparison.

Not that I’m complaining. This is a genre, after all, that was first defined by having overdubbed Italian strongmen battling giant puppets, and so it has always been a trashy (and unintentionally homoerotic) spectacle. This is a lowbrow pleasure, and I don’t need Russell Crowe moping around in a pepla to see these films. In my opinion, “Gladiator” was actually made by Joaquin Phoenix’s arch, maniacal performance as the villain — he really caught the spirit of things.

And so “Gladiator” is probably a better film than, say, “Immortals,” which opened to impressive box-office sales this weekend. At least “Gladiator” was a better film by Oscar standards — finer lead actors, better costume design, arty but restrained direction. But, in its own way, “Immortals” is a better sword and sandals film. Because it’s perfectly, and delightful, ridiculous.

The film was directed by Tarsem Singh, who has, one supposes, been preparing for this moment for his entire professional life — back in 2005 he directed a Pepsi commercial that featured Britney Spears, Pink, and Beyoncé as female gladiators rising up against an emperor who is hoarding the beverage. They took the despot down by singing Queen’s “We Will Rock You.” Singh has since gone on to direct a pair of films defined by a lurid, occasionally incomprehensible visual sensibility, and now he’s offering up his version of the tale of Theseus, sort of.

Those of us who remember our Greek myths probably remember Theseus as the guy who battled the minotaur, and, yes, that appears in this film, after a fashion. It’s both encouraging and perplexing that ancient myths can still be mined for popular drama, even if that drama is so kitschy, in the classic definition of the term — when it described plaster of paris statues of Greek nymphets that tourists to Europe would purchase to make their suburban tract homes look fancy.

“Immortals” pays about as much attention to actual Greek myths as, say, “300” paid to actual Greek history. No, these old stories are really just a pretext to get well-muscled men stripped down to their greaves, and little else, and then art direct their surroundings at they hack away with short swords, long spears, and that odd trident and fishing-net combination that sometimes shows up as paired weapons in these films.

Let’s specifically discuss the pleasures of “Immortals.” The whole of it is green screened, as with “300” (the films share producers), but while the earlier film seemed designed to look like panels from a comic book, “Immortals” looks like Carraviagio’s Renaissance-era portraits of classical themes. It’s oddly luxurious and dreamlike, with such unreal trappings as a sea of oil and a village set into the side of a cliff. Director Singh doesn’t seem to have much interest in the film’s heroes — they’re bland nobodies, despite the fact that one of them is played by Stephen Dorff, an actor who can make almost every role seem like a moody, slightly naughty rock and roll star. No, Singh’s real interest here is in the villain, and he has cast Mickey Rourke as the leader of a ravaging, almost subhuman horde of invaders.

The scenes with Rourke have the quality of a nightmare set in a contemporary art gallery. All of his men have a taste for perverse arts and crafts, so they make themselves uniforms that look beaten out of soft lead and barbed wire. Rourke himself wears a helmet that has pointed blades that surround his face like teeth and is topped by rabbit ears. Rabbit ears! I could describe his performance, but, by now, Rourke’s feverish muttering and scowling has almost become an acting convention of its own. Suffice it to say he Mickey Rourkes it up in this film, and it’s the sort of film that benefits from somebody Mickey Rourking it up.

Perhaps the oddest and most bemusingly entertaining element of the film is its presentation of the gods. They hang about on Mt. Olympus in gold armor, peering over the side at the world of men, and sort of stamp about petulantly, frustrated that they can’t participate, thanks to an edict by Zeus. If they seem like anything, they seem like the male models in “Zoolander” — beautiful, and spectacularly stupid. This is a film that has been rather discreet with its violence, but when the gods finally come down, all bets are off. When Hephaestus swings his hammer, heads burst like water balloons. Poseidon wields a trident, of course, and it is eviscerating. It’s a perfectly lunatic moment, the sort of thing that make these films so much fun. WHAT IS HAPPENING WITH THOSE MALE MODELS! THEY HAVE GONE CRAZY! SOMEBODY STOP THEM!

This is, by the way, the subtext of every sword and sandals film ever made.

‘Immortals’: the pleasures of the sword and sandals film