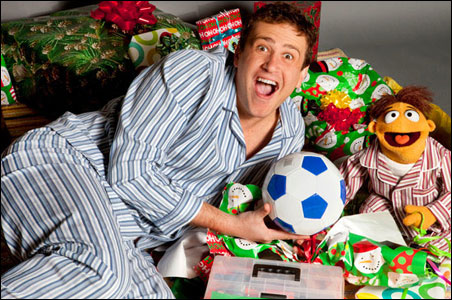 “The Muppets” currently enjoys a 98 percent “fresh” rating on “Rotten Tomatoes,” which breaks down as follows: 135 critics have weighed in on the film. 132 have liked it. Three haven’t.

I went and read those three negative reviews — and make no mistake, these were flat-out pans. I had already seen the film, and joked that I wanted to know what it was like to live in a world without joy. But the truth is, I am always curious as to the source of an outlier opinion, and you can’t lie much further out than to pan the new Muppet movie. It’s a bit like seeing an adorable kitten do something adorable and then booing it.

There are some critics who are contrary to the point of belligerence, such as Armond White, a fan of Pauline Kael who seems only to have learned from her that sometimes she liked films that others panned and disliked popular films, and so has built an entire career around it, producing criticism that reads as though it comes from Bizzaro World, where up is down.

But he has not weighed in yet. No, the pans come from three critics who aren’t necessarily known for their contrariness, including J.R. Jones of the Chicago Reader, Melissa Anderson of the Village Voice, and Rick Groen of the Globe and Mail. And what were their complaints?

Jones’ aren’t extensive — the film only nabs a single paragraph, and Jones primarily complains that the film lacks “grown-up snark.” Jones may have a point, but I’m a bit weary of snark, a style of comedy that has exploded with the web, and consists primarily of snide put-downs pretending to be wit. The humor of “The Muppets” is quite a bit daffier, and earnestly so — oddball punchlines fly, and the characters in the film often mention the fact that they are in a film, and comment on its conventions. I don’t see this style of humor as necessarily juvenile, but Jones is right that there aren’t many moments where co-screenwriter and co-star Jason Segel seems to be making a joke intended only for the adults in the audience, knowing it will sail over the heads of the movie’s pre-teen audience. This has become pro forma in contemporary children’s films; missing it is purely a matter of taste.

The Village Voice’s Anderson has a similar complaint: She sees the film as pandering to contemporary audiences by fleshing out the film with cameos by contemporary stars and references to contemporary pop culture. The original Muppet show, she declares, wrongly, was proudly square, as its guests stars were often people like Ruth Buzzi and Zero Mostel, who most kids in the ’70s couldn’t give two figs about. This directly conflicts with my own memories, and I, like Segel, grew up obsessively watching the show. Fortunately, our memories are now augmented with technology, so I turned to the web for confirmation. Yes, Mostel and Buzzi were both guests (although it’s worth noting that Ruth Buzzi was then starring in “Lost Saucer,” a children’s show by Sid and Marty Kroft, and so therefore would have been quite familiar to juvenile audiences.) They also had Steve Martin, Don Knotts (then known to children as a result of a series of films marketed squarely at them), Elton John, Alice Cooper, Gilda Radner, Shields and Yarnell, Christopher Reeve, Brooke Shields, and Debbie Harry. The show was always a mix of old entertainment and new, and “The Muppets” immediately tips its hat to the fact: Its first two cameos are by Mickey Rooney and Feist.

As to Groen’s review? The truth is, I am not sure what his complaint is. If criticism is, as Mencken says, prejudice made plausible, this critic hasn’t given us much reason to find plausibility in his prejudice, merely dismissing the film’s jokes as “lame” (a lazy, distasteful phrase) and saying the Muppets worked better on television than film. He’s entitled to his opinion, of course, but, when he shares it, it would be nice if he tried to justify it in some way. I always thought the reason we critics got paid for our opinion was because we could justify it in print, but now I’m starting to get the feeling I was overworking myself. If I don’t like a film, apparently all that is required is for me to do the literary version of thrusting forward a downturned thumb and blowing a raspberry.

But, then, I have always tried to discourage people from using critics as consumer guides for film, because we’re weirdos. In a lot of ways, “The Muppets” is a perfect film for me, but then I am a lot like the film’s two surrogate audience members, Segel and his cinematic brother Walter, who is a hand puppet. I grew up watching the Muppets, and have missed their particular brand of anarchic humor terribly, and have missed their creator, Jim Henson, who died too young and now too long ago. I miss Frank Oz, the creator of a series of openly neurotic Muppets, including Miss Piggy and Fozzie Bear, and who may be unparalleled as a puppeteer; he is now a film director, and no longer even lends his voice to the characters he created. And, for me, “The Muppets” is a return to form.

In fact, if anything, it’s a fan film. There has been a lot of concern that Disney, who now owns the Muppets, would muck up the franchise by making this a Segel film that happened to have Muppets in the background. Instead, it’s Segel in the background, occasionally commenting but usually spectating, which is exactly where I would put myself in a Muppet movie. Segel’s real contribution is metaphorical — by casting a hand puppet as his brother, and having the film’s narrative revolve around that puppet’s feeling of alienation that eventually blossoms into a sense of acceptance when he meets the Muppets, Segel has quietly crafted a sort of coming-out movie. And, as Segel himself at one point seems as though he might cross over into Muppet-dom, his character represents a feeling that many of us fans have — let’s call it Muppet-curious.

The biggest expression of Segel’s fandom is that the last half hour of the film is, practically speaking, an entirely new Muppet Show, with the original show’s taste for harried guest stars, misfiring acts, backstage chaos, and abusive heckling. There can be no greater gift to a fan of the show than to give them an entirely new episode of the show they loved. And, as it happens, there are a lot of us out in the real world who have been waiting for that gift. And, if the reaction of the children in the audience of the screening I saw was any indication, there are new fans aborning every day.

‘The Muppets’: A fan film that draws very few pans