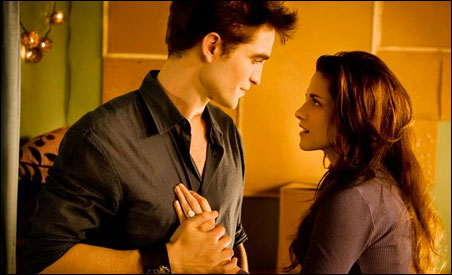 I went to the first “Twilight” film when it debuted in 2008, not having read the Stephenie Meyer book upon which it was based, but intensely curious. It was a midnight screening at Block E downtown, and I wasn’t sure who, aside from me, might show up for it. It turned out that the theater was nearly full, mostly with young women, most of whom had come in groups. I quickly realized I wasn’t particularly the niche audience for this film, but I had some good things to say about it anyway.

Don’t get me wrong, there is an underlying preposterousness to this story. It is, after all, about a fairly nondescript young woman in the Pacific northwest who finds herself in a love triangle between a Native American werewolf and sparkling vegetarian vampire. The whole of it comes off as an unexpectedly successful example of an especially juvenile approach to writing, in which the plot is pure wish fulfillment, with a character who is instantly recognizable to critics of fan fiction as a “Mary Sue” — a thinly disguised and idealized version of the author herself. Bella, the lead character, suffers a lot in the series, but Mary Sues always suffer. It’s a sort of suffering that attracts a lot of affectionate attention from beautiful people. The whole series reads as a sort of literary version of Münchausen syndrome, in which patients fake ailments because they crave the piteous attention that comes with it.

Nonetheless, I thought the first film was surprisingly well handled. Bella is notoriously a nonentity in the books, having barely anything resembling a personality, but the film cast Kristen Stewart in the role, and she possesses an impressive collection of appealingly dorky mannerisms. The film also did an especially nice job of drawing her relationship with her estranged father, in which every gesture of affection felt somehow forced and awkward.

I didn’t bother with any of the other films, but word started getting out that, as the series progressed toward its climax, it got weirder and weirder. And suddenly I was the target audience for this new film, incomprehensibly called “Twilight: Breaking Dawn,” which is a bit like naming a story “Midnight: 6 a.m.” There are two things about this film I was bound to find appealing. Firstly, it has, I think accidentally, recreated one of the great tropes of trash literature: The town with secrets. And it’s the same sort of secrets you’ll find in a town like “Peyton Place,” including murderous clan rivalries, incestuous families, secret childbirths, etc. Except, in this town, the closets have actual skeletons in them, and the biggest secret is that an increasingly large percentage of the town’s population is made up of supernatural monsters.

The other thing I was bound to like about this film is that Meyer seems to have gone off the rails, narratively speaking. This is, after all, a film that opens with Edward, the romantic lead, confessing to having committed what sounds like hundreds of murders in the past. I don’t think I am spoiling anything by telling you this, as Kristen Stewart shrugs it off, Edward heads out to a party, and the subject never comes up again. The film is far more concerned with the fact that the vampire and the girl are about to be wed, and the problems of their honeymoon. Specifically, he might accidentally kill her when they consummate their marriage. Indeed, she ends up pretty bruised, and somehow the entire bedroom is trashed, for which Edward is awfully apologetic. Stewart’s character doesn’t seem to care one way or the other, though — a fact that some critics have pointed to as inadvertently justifying domestic abuse.

Certainly whatever message is being sent is inadvertent — if ever there was a piece of work where subtext is unintentional, it is this. But I get a different subtext from this, that Bella just likes it a little rough, and, in my opinion, whatever happens in somebody’s bedroom, as long as it is consensual and safe, is none of my business. A few bruises don’t instantly mean domestic abuse. They could instead mean mild bondage.

And, for me, this is where the film gets really interesting. Because the film suddenly becomes about the question of abortion, with nearly everybody attempting to persuade Bella to terminate the pregnancy, which leaves her a convincingly emaciated wreck. But, for reasons she keeps to herself, Bella won’t, and suddenly the accidental subtext of the film is reproductive freedom. It’s a sort of mirror image of your usual abortion narratives, where a woman wants to terminate a pregnancy but can’t. Nonetheless, the film treats the decision to keep or not keep the fetus as her choice exclusively, and it’s one that the film’s various vampires and werewolves respect, even if they disagree.

And the film never equivocates. The vampires, for some reason, have an entire medical clinic set up in their house, and, if they wanted to, they could just drug her and terminate the pregnancy without her permission, but the idea is never broached — this despite the fact that there are at least two characters who seem to have their own plans to murder the infant the moment it is born. And perhaps, ultimately, it is easier to make a story about choice when the choice is to have the child, rather than terminate the pregnancy, but nonetheless this is a film that presents women as having exclusive agency over their reproductive decisions. I don’t know if this is what Meyer intended, but, in the end, authorial intent doesn’t matter, particularly when the author seems to have no control over subtext. Whether Meyer intended to tell a pro-choice story or not, that’s what we have wound up with.

In fact, this dominates the film, briefly putting aside the question the story has wrestled with since the first film: Will Bella get to be a vampire or not? And I never found that an interesting question, as Meyer, once again seeming to be oblivious of subtext, named her Bella, which is a bit like naming her Nosferatu or Vlad. I mean, if you have a zombie film, and you name the main character Stagger Stiffly, you’ve pretty much already tipped your hat to the story’s conclusion. No, this film is much more interesting, as it darkly starts suggesting that the climax might be less like a traditional vampire film than the chestburster scene in “Alien,” and how could I resist that? Juvenile Mary Sue fantasy or not, when the going gets this weird, the weird are likely to go.