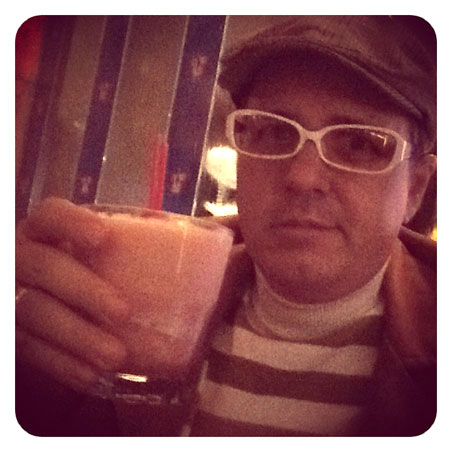 Minnesota is home to a peculiar sort of foodie-ism, one I associate, at least at its start, with Pizza Luce. I speak of a regional sense that one can take perfectly everyday food and make it exceptional by adding unexpected ingredients, like, say, mashed potatoes atop a pizza pie. This has its merits, although it is not generally to my tastes. I am not one to discourage invention, and if somebody wants to make a grilled cheese sandwich and top it with cod liver oil and a pimento loaf and then redub it a “craft grilled cheese,” by all means, experiment to your heart’s content.

This approach has spread to the making of cocktails, which I have written about previously. It provides a little novelty, but we’re in a town where a vast majority of bartenders can’t be counted on to make a decent martini, and I am supposed to trust them with “their version” of a whiskey sour, which for some reason includes kale? And even those who do have a talent for mixing outrageous ingredients together are typically creating recipes that are unenduring. One of these fellows will come in and consult at a newly opened bar, creating a group of specialty house cocktails, and this will last just as long as the current crop of bartenders or management last. The moment the staff turns over, the recipe switches back to overly sweet drinks made with infused vodkas and Red Bull.

Not that I will knock novelty. Whenever I go to a new bar, I request something from their specialty menu. They’ve gone to the trouble of making it, I can take the time to drink it. And I’m a pretty amiable drinker. I recently had the frozen pomegranate margarita at the newly opened Rosa Mexicano in downtown Minneapolis, a New York-based chain that offers traditional Mexican food with “regional accents and inspired innovation” — presumably, their signature margarita is an example of this.

The first thing I’ll tell you is that it’s not a margarita, although, to be fair, there are a lot of drinks calling themselves margaritas that just ain’t. It’s not enough to mix tequila with a citrus juice (typically lemon or lime); that’s closer to a tequila sour than it is a margarita, although, for some reason, in Los Angeles, that’s what you get when you order a margarita. In order to get the vital third ingredient, orange liqueur, you must order a “Cadillac margarita.” I think it’s fair to say this doesn’t represent a regional innovation on the part of LA Mexican restaurants, but instead cheapness, and should be discouraged. The orange liqueur is essential to the cocktail, and without it, it’s a different drink.

The frozen pomegranate margarita at Rosa Mexicano does not have orange liqueur. Or, if it does, it’s not listed on the menu, and is so subsumed by the other ingredients as to be unnoticeable. What it does have is pomegranate juice, and the whole of it is served mixed with finely pulverized ice, in the manner of a frozen daiquiri. I am going to go ahead and assume this has been called a margarita for the same reason everything served in a martini glass is called a martini, even drinks lacking gin and vermouth — because most drinkers only recognize a limited number of cocktail names, and tend toward the familiar. But did I start banging my cocktail glass on the table and crying out that there is some evil afoot? No, I did not. I drank my pomegranate cocktail like a good boy, and I enjoyed it.

Pomegranate, citrus, and tequila are good pairings, and this cocktail reminded me of an upscale version of the slushy frozen slurries that are sold along Bourbon Street in New Orleans. None of them are great drinks, but they have names designed to reflect their function, which is to get you drunk with a minimum of fuss: Jungle Juice; the Grenade, etc. Sometimes, when the New Orleans humidity has kicked up to dog’s breath levels, and you’re wandering the quarter with a frozen cocktail in a plastic cup, you’re not looking for mixological genius, you’re just looking to laissez les bons temps rouler.

I should note that Rosa Mexicano makes a perfectly good regular margarita, and uses 1800 Tequila in their happy hour menu, so you can get a well-made margarita with a decent tequila for about $5 at the right time of the day.

But adding pomegranate to tequila is hardly representative of the chemical invention of our local bartenders, who would never be satisfied with something quite so quotidian as a simple pomegranate. No, here are the ingredients to a Minnesota-made pomegranate cocktail:

These are the ingredients to a drink called Intermission, created by a bartender named Richey Rivera, who is associated with Eli’s downtown — a good watering hole, by the way. I haven’t had this particular drink, but I am going to go ahead and assume it tastes of pomegranate and lavender. I know about this cocktail because of a book called “Northstar Cocktails,” written by Johnny Michaels of La Belle Vie and collecting new cocktail creations by the North Star Bartender’s Guild, a “non-profit organization made up of a community of like-minded craft bartenders.”

This is an interesting twist on the traditional cocktail book. Typically, collections of cocktail menus were published by liquor companies, and they focused on cocktails that were easily reproducable (and often insisted that the cocktail must contain their liquor). They were given away to bartenders, who kept them behind the bar in case somebody ordered, say, a pink gin and they had never hard of the drink before (it’s just a shot of gin with a dash of bitters). The books would also be sold to amateur home mixologists, so they had something to consult when attempting their own old fashioneds. But there has always been a second trend in cocktail book publishing, probably popularized by Trader Vic, who sold his books mostly as souvenirs. You might want to make some of his tropical cocktails at home, but they generally required a massive amount of obscure liquors and mixers. Nowadays, it might cost you $10 to get a drink at Trader Vic’s, but it would cost you $100 to make the same drink at home, assuming you could locate somebody who sells orgeat syrup.

With the exception of tropical cocktails, which you’ll generally only find in specialty bars (and somewhat simplified versions at inexpensive Asian restaurants), classic cocktails tend to be defined by the ease with which they can be reproduced. For instance, one of my favorite cocktails is the sazerac, which, in theory, is a pretty simple drink: rye whiskey, simple sugar, bitters, and a drop of absinthe or pastis. However, this is an easy drink to mess up — the wrong rye, the wrong absinthe, the wrong quantities, and you have a drink that tastes completely wrong. You really have to have had a good sazerac to make a good sazerac, because you need to know what it tastes like. And so the drink never really caught on. However, a similar drink, the manhattan, always seems to taste more or less like a manhatttan, even if you use more vermouth than usual, or swap out rye whiskeys, or dump a little cherry syrup in the drink. Few bars in the Twin Cities offer sazeracs, and most muck the drink up. (Bradstreet makes them perfectly). Everybody makes manhattans, and I have yet to have a bad one.

So I am not sure “Northstar Cocktails” is a document of reproducability. There are drinks in here that demand maraschino liqueurs, allspice tinctures, rosemary leaves, honey syrups, home-made bitters, and nasturtium blossoms. You’d have to have  pretty well-stocked bar to make these drinks, even if you’re actually a bartender and work at a real bar. More than that, you would likely need to have tried the original, and undoubtedly delicious, version of the cocktail to accurately recreate it.

I think of this as less a functional recipe book than as a document of an era. We’re in a particular time, cocktail-wise, when a particular approach has become popular, and many of the cocktails invented during this era have merits, even if their lifespan is limited to the employment period of a barstaff. Michaels has provided a representative sample of the drinks invented during this time, and the books shows a great flowering of creativity. I don’t know that this trend has any legs — historically, it hasn’t. But at least in the future, when some new trend has come along, we’ll have known what was tried during this time, even if it failed to produce any classic cocktails.

Besides, Minnesota already is responsible for the invention of one classic cocktail: In 1975, a bartender named Neal Murray was playing around with a cranberry cooler named the Cape Codder and added orange liqueur. A customer tried it and declared “How cosmopolitan!” The drink has four ingredients that every bar in America has on stock, and tastes about the same no matter how sloppily you make it. And so it was the cosmopolitan they sipped on “Sex and the City,” and I doubt a future version will have the characters drinking Johnny Michael’s Tomgirl, which requires a homemade mix that includes cayenne pepper. And it may be a bit of a shame, as the Tomgirl sounds delicious — I mean, I like a well-made old fashioned or a shot of whiskey as much as the next person, but once in a while I’d give my left hand just to be able to walk into any bar and order a sazerac.

‘Northstar Cocktails’ and the flourishing of the craft mixed drink