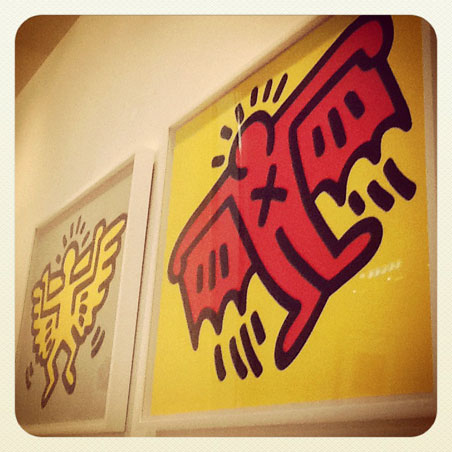 I mentioned Japanese artist Yoshimoto Nara a few days ago, as several of his pieces are on display at the Minnesota Institute of Arts as part of the “Edo Pop” show. As it turns out, there are other Nara prints in Minneapolis, in the Burnet Gallery at the Chambers Hotel downtown. It’s a Nara explosion! And that’s the sort of explosion that contains big-headed, big-eyed cartoon childen, all holding knives.

The show is “Pace Prints, NYC,” which is exactly what it sounds like: A collection of spendy prints from a well-known, New York-based fine arts printing organization. Pace is a bit of a Who’s Who of modern and contemporary art, and so, in this collection, you will see Sol Lewitt, Chuck Close, Jim Dine and Keith Haring.

Keith Haring. It’s hard to believe he’s been dead 21 years. When I was a boy, in the ’70s and ’80s, I would regularly go to New York with my family, or alone for the summer, as the city and its surrounding boroughs were filled with aunts, uncles, cousins and relatives I couldn’t identify. Haring was inescapable then. He was famous for a strange, and strangely iconic, collection of cartoon representations of UFOs, television sets, and glowing babies. Back then, they seem to have broken loose from the subways where they originated, and where Haring had drawn them in chalk on empty poster spaces. They now filled galleries, and appeared in music videos, and stood above the city as massive works of public art. He even painted a mural inside the Walker Art Center in 1984.

Now, I only see his work every so often — I think the last time was three years ago, again in New York, in the Museum of Sex, where they had some samples of his AIDS-awareness posters. And, even had he not passed away from the disease in 1990, I suspect his work would have faded from public view. Even though he was vaguely associated with New York’s punk scene, his work always seemed more New Wave to me, with its Day-Glo colors and arty riff on popular culture. New Wave has come and gone, alas, but seeing Haring again, in the Burnet Gallery, given me the same sort of pleasure as when the Motels suddenly come on the radio.

But art should never just be nostalgia, and so the Burnet also has work by a contemporary artist who is often compared to Warhol, but seems more like an heir to Haring to me. There are two pieces — or, more properly, two versions of one piece — by an artist named Ryan McGinness, both titled “VMFA Drawings.”

McGinness starts with the sorts of small, simple iconography that you might associate with a street sign, or with those dingbat fonts on your computer. And then he just goes wild with them. There may be a thousand of these sorts of images in the pieces represented at the Burnet, clumped together in the middle of the frame and then radiating outward, each given a discrete space, but pressed together like fellow citizens in an especially crowded city.

There is a sort of occult sensibility to this particular piece, as many of the icons seem borrowed from Eastern religions — there are little Buddhas, and Hindu gods, and bird-headed Egyptian gods. I think Chuck Close might be in there too as a grinning, bearded presence — easy enough to double check, as there are at least two of Close’s self portraits in the gallery. On one of McGinness’ prints, all of these little dignbats are reverse embossed into a large sheet of handmade paper, and then printed blue, as though small pools had been dug into the paper and then filled with ink. On the other prints, no ink has been added; the images are only visible from the small shadows that the paper casts into its embossing.

Another print caught my eye, by artists I somehow had not previously been familiar with: Ghada Amer and Reza Farkhondeh. After some research, I believe this piece is from a collaboration between the two artists called Roses Off Limits, which borrows images from pornography. In fact, there are three images here, layered on top of each other. At the forefront is what seems to be a simple line drawing of two women kissing; it is, in fact, made from pink thread. Behind this are falling roses, painted in a very faint red. And behind this, almost lost in the composition, and perhaps deliberately so, is a reclining nude in a pose directly lifted from adult publications.

Of course, fine arts have been appropriating adult entertainment for just about forever, but so what? Artists have also been painting still lifes for eons, and I personally am more curious to see what artists do with the subject of sex than the subject of bowls of fruit. In this instance, the blending of the images somehow initially robs the image of its sexual charge and then heightens it, in that its details are masked by its composition, and by the flowers. It’s sort of like the adult movies that were broadcast over pay channels back in the ’80s, but somehow bled over to UHF stations, and so would appear embedded in static, often with colors reversed and contrast inverted. After a while, your brain would start to decode the signal, but only in spots — a hand here, a breast there. This seemed somehow naughtier than actual adult entertainment, perhaps because it was superimposed with a sense that the viewer was seeing something forbidden.

Of course, I’m speaking about a long-gone phenomenon. Like New Wave and Keith Haring, it was a thing of the ’80s, and the ’80s passed. But, then, like both, I find myself happy to see it again, or at least be reminded of it. I suppose part of the experience of aging is discovering unexpected things nostalgia seizes on. Art, yes, and music, of course. But also the adult entertainment of my youth.

Ugh, How embarrassing. I expect any day somebody will catch me with a copy of Alex Comfort’s “The Joy of Sex” and a National Geographic, clutching both and weeping for my lost youth.