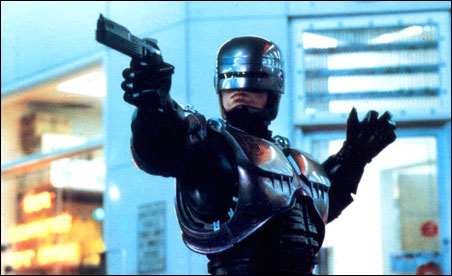 There is a lot going on that is worthwhile this weekend, cinematically speaking. First and foremost, there is a rather astonishing double bill playing at the Trylon tonight.

When I initially saw these two films had been paired, for the life of me I couldn’t imagine why. After all, the first, “Robocop,” is a satiric science-fiction film about a murdered police officer who is turned into a robot. The second, “Naked Lunch,” is David Cronenberg’s ingenious adaptation of the least adaptable book ever written, which couples themes from beat author William Burroughs’ original novel with details from Burroughs’ life. Both are fascinating films, but what do they have in common?

The answer: Their lead performer, Peter Weller, who enjoyed a brief period in the 1980s and early ’90s when he was America’s definitive cult movie star. Although he’s still a working actor, there was something about him that was perfect for one particular time. He was angular and handsome but curiously remote, which made him an ideal actor for a few very specific projects. In “Robocop,” that remoteness turned mechanical — he’s more convincing in the film as a cyborg than as an ordinary cop, and he’s better at his job. This was the first American film by Dutch director Paul Verhoeven, and he brought to it a taste for excess that manages to be both horrific and comical. It’s a violent film, but the violence is so excessive as to be almost slapstick.

In the meanwhile, Cronenberg translated Weller’s remoteness into beat existentialism in “Naked Lunch,” with Weller playing a stand-in for Burroughs, dressed in the author’s signature long coat and fedora. Weller experiences the events of the film — which are pure lunacy — with a deadpan wryness, a sort of comical cynicism and weariness. When lizard-like aliens appear in bars, offering drinks from phallic-looking appendages, Weller’s response is, at its mostly lively, vague curiosity.

There’s another film by a cult novelist playing in the Twin Cities tonight, although sadly lacking Peter Weller. The film is “Variety,” playing at the Walker Art Center, and it’s a collaboration between filmmaker Bette Gordon and author Kathy Acker, who wrote the screenplay from a story by Gordon. It tells of a young woman who takes a job selling tickets for a Times Square porn theater, and, in this way, is both a product of an era (the early ’80s) and a document of the end of it — Times Squares’ grindhouses would soon be closed as the neighborhood changed into the tourist mecca it is now. The whole of it is directed in a spare, seemingly uninvolved style that frustrated critics when it was released, or at least those who were unfamiliar with the developing no-wave artistic movement, which addressed the urban experience with a practiced, cool curiosity. Come to think of it, Weller would have been ideal for this film.

There are also two events at Bryant-Lake Bowl worth looking into. Tonight is the start of the second week of Joseph Scrimshaw and Bill Corbett’s “Cinemadness,” a combination panel discussion and quiz show about films. Scrimshaw is familiar to Twin Cities audiences as a comic actor and playwright. Corbett was a castmember for “Mystery Science Theater 3000,” a show famous for its sardonic commentary on films, a tradition Corbett continues with “RiffTrax.”

It’s a good setup for a show. There is a tendency for film nerds — and I consider myself one — to treat movies with obsessive seriousness, but the truth is, it’s a pretty weird art, as should be easily demonstrated by the films I have mentioned just in this column. In fact, I would argue that this is one of the real pleasures of filmmaking — what else simultaneously costs so much yet gives itself such license to be so odd? And I can’t think of better humorists to remind us of these pleasures than Scrimshaw and Corbett.

Actually, if we’re going to discuss film as a weird art, I have saved the weirdest for last. Saturday night, the Bryant-Lake Bowl presents another in the Women in Crisis Film Series, which presents Lifetime films with live commentary from guests who appreciate these made-for-television movies as camp spectacles. This week will be one of the most spectacular ever made, the marvelously titled “Mother May I Sleep With Danger,” from 1996 and starring former “Beverly Hills 90210” castmember Tori Spelling. Here is another instance where outrageousness is improved by deadpan, and I can’t offer a more neutral, or more comical, description of the plot than Wikipedia does: “Laurel (Spelling) discovers that her new boyfriend Kevin is a serial killer, and must escape the mountain cabin in which he is holding her captive by paddling down a river in a canoe at dusk.”