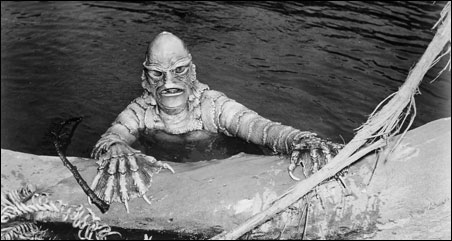 Courtesy of Universal International
“The Creature from the Black Lagoon,” playing in 3D at the Trylon

I think I have mentioned previously that I am an avid listener of the Judge John Hodgman podcast, and I have also discussed my great love for television shows that feature judges arbitrating cases that concern unpaid cell phone bills, or disappointing wedding deejays, or loans ex-girlfriends made to ex-boyfriends that were then never repaid.

I suppose what I like about the Hodgman podcast is that he retains the typically impatient manner of a television judge — he will frequently bang his gavel and cry out, “Order! I will have order!” But he does this in service of far more entertaining cases. If you have seen one cell phone case, you have seen them all, but Hogman hears cases that don’t typically fall across a television judge’s dockets. There was, for instance, a recent case in which a boyfriend and girlfriend could not agree on whether to keep some collectible “X-Files” action figures in their original packaging, preserving their worth, or whether they should break it open and play with the toys.

Hodgman is, of course, the author of the unexpectedly successful “The Areas of My Expertise,” a sort of World Book of Extraordinary Facts in which every single fact is invented; he’s followed it up with two sequels, the most recent of which he is promoting. He’s managed to find a second career as an odd media presence, starting with almost concurrent gigs on “The Daily Show” as their resident expert on everything and playing the PC on the now iconic Mac v. PC commercials.

And I mention him because he’s in town tonight, as part of MPR’s “Wits” program, a semi-regular program of people who are unusually clever and/or funny. Joining Hodgman will be John Darnielle of The Mountain Goats, an indie rock band from California that, as the show’s promotional material notes, “literally everybody in the world loves.” Also on hand will be two former “Mystery Science Theater 3000” (and current Rifftrax) castmembers, Bill Corbett and Kevin Murphy.

I know that I sometimes unfairly favor the Trylon Microcinema in my roundup of worthwhile weekend events, but, gosh darn it, they just keep programming worthwhile stuff, and I’m not the sort of writer who believes that once somebody has been written about once, they need a little break from coverage. There is a weird tendency among Twin Cities writers to do this, as though one must necessarily be democratic in one’s writings, and not favor one organization too much. This is ridiculous. Arts coverage is a meritocracy, and merit is determined by the idiosyncratic tastes of the writer. And my tastes lean toward classic 3-D movies, which the Trylon is showing throughout the weekend. Specifically, “It Came From Outer Space,” which I have never seen but is famously name-checked in the theme song to the “Rocky Horror Picture Show,” and “Creature From the Black Lagoon,” which I have seen.

“Creature” is most famous for the Gill-man costume designed by Millicent Patrick, which is one of the iconic movie monsters, but it’s worth noting that the film has a perfectly enjoyable — and utterly balmy — story. It tells of a group of scientists trapped in a narrow Amazonian inlet by a monster who has a crush on one of their team of staff, and somehow manages to outwit them at every turn. This becomes inadvertently funnier as the film progresses, as the Gill-man doesn’t seem especially clever, and after a while you just get the sense that this is a group of spectacularly dense scientists. Usually scientists aren’t all that moronic, except in 1950s science fiction-cum-horror films, where they always were. The 3-D is great fun as well, almost entirely consisting of webbed hands reaching for the audience.

I have room for one last recommendation, and I’ll use it to mention something I have actually been neglecting: The Cowles Center for Dance and the Performing Arts. The organization made a bit of news this week when its director, Frank Sonntag, resigned suddenly and with scant explanation, simply saying that, as a New Yorker, he didn’t mesh well with the culture of Minnesota. This may be true. My parents are New Yorkers, and my father, who was given to public displays of impatience and temper, didn’t mesh well with the Twin Cities, where such displays are seen as being demonstrations of lunacy. He now lives in New York.

Sonntag’s resignation also ignited one of the Twin Cities’ most popular pastimes — getting insulted and hurt because somebody hinted that we may not be as good as other places, which is a real sore spot for Twin Citians. If it helps any, I would be surprised if Sonntag actually meant that he can’t stand the cultural wasteland that is Minnesota and is returning to the artistic wonderland of New York. His was the sort of generic statement that usually means “I have had it with my board of directors” or, in my case, “I can’t get a good cocktail at the fundraising event.” I’d investigate further, but the comings and goings of managerial staff is the least interesting part of the arts to me — it’s like gossip in which nothing interesting ever happens. Instead, I’d rather spend time with the performers, where the gossip is usually better.

In this case, Cowles is presenting the Zenon Dance Company. They’ve long been one of the Twin Cities best troupes — how long? More than three decades long, and they continue to present new work. Starting tonight, they will be premiering a piece by Mariusz Olszewski, a Polish-born choreographer and current Twin Citian who seems to have successfully meshed with our local culture. Olszewski is inspired, in part, by ballroom dancing, which has enjoyed quite a revival recently thanks to the “So You Think You Can Dance” television show (the Polish version of which Olszewski has choreographed for!). Zenon will also present pieces by Daniel Charon, Danny Buraczeski and Morgan Thorson.

If this doesn’t satisfy you, the light rail line is just a block or two from Cowles. At the end of the show, just march out and take the train right to the airport to buy a ticket for someplace that suits you better.