It occurs to me that I haven’t written about theater for a while, which is a bit foolish in a place like Minneapolis. Theater grows like clutter here, and must constantly be tended too, or it expands into every surface. You think, oh, I’ll take care of all this theater tomorrow, and then go to bed, and when you wake your sink is full of a modern-dress version of Shakespeare, your bathtub is clogged with Fringe Festival applications, and the floor of your closet is piled high with an improv troupe.

Speaking of improv, I particularly haven’t written about Huge Theater for a while, although I did write a little essay for its website about how to promote improv in the Twin Cities. In it I warned that most critics don’t really know how to write about improv, and so troupes are likely to have to bypass the media altogether. I guess not writing about them proves my point, but that wasn’t my intention. In fact, they have an awful lot going on that’s worth mentioning. On Fridays, as an example, they offer three different acts for just $10, including “Poivre,” an improvised noir film, and “Last Action Movie,” which may be the only improv troupe in the world that includes swordplay.

Saturday night, in the meanwhile, offers one of the more delightful improv structures I have ever seen in a show called “Off Book.” The show brings in a stage actor and gives him or her a theatrical script to memorize, but this is the only performer who is working off the script — everybody else improvises, and is completely unfamiliar with the original text. I’ve always felt that improv is best when it reveals a battle between organization and chaos. I think one of the problems with the most common long-form improv structure, the Harold, is that the underlying structure isn’t self-evident to the audience, and so chaos seems to come out the victor by a longshot. But “Off Book” provides a self-evident spine to build improv around, and creates a circumstance when it is obvious when the performance is pulling away from its structure and when it is being forced back. Like, I suppose, an especially tortuous chiropractic session, since I have already mentioned spines and am now stuck with that metaphor.

I think irregular theatergoers have a suspicion that theater is either disconnected from everyday life, telling historical fantasias in impenetrable language, or, when it addresses current events, becomes preachy and didactic. And, as someone who has been a theater professional for most of my adult life, I would like to respond: They are too often right. Fortunately, there are also theaters like Frank, which manages a neat trick: It’s a company that is at once political and contemporary, and yet manages to be entirely accessible. And I have yet to see a Frank play that is preachy — instead, artistic director Wendy Knox has a talent for choosing scripts that problematize their subject, if you’ll forgive my use of the term. Put more simply, Frank plays don’t offer easy answers, and each answer that comes along simply presents more problems.

This is very much the case with its current production, “Ajax in Iraq” by Ellen McLaughlin. The playwright has a taste for modernizing classic myths. In this instance, she has paralleled the story of Ajax, the strongman of the Mycenaeans, who committed suicide after a violent sleepwalking episode, with the tale of a contemporary female soldier in Iraq, who is also being driven to somnambulant madness by war.

The Jungle Theater has brought back one of their most popular plays, “I Am My Own Wife,” scripted by Doug Wright, who won the Pulitzer for it. The play tells of German antiquarian and transvestite Charlotte von Mahlsdorf, whose extraordinary life involves exactly one homicide and one fascist regime. It’s a doozy of a play, but its local popularity isn’t due to the script alone — the production is blessed by an ideal director, in the person of Joel Sass, and an ideal performer, in the person of Bradley Greenwald. Both have a taste for outré material, and both have a talent for humanizing the material so that its oddest and maddest moments become its most human. 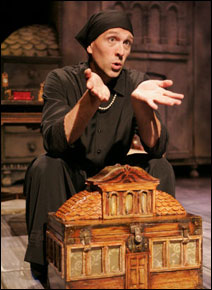 Finally, a play opens today that does a marvelous job of matching content to location. Gremlin Theatre is tackling Strindberg, under the typically deft direction of Leah Cooper, at the James J. Hill House. Properly, I should point out that this is not Strindberg, but Strindberg revisited: The play is “After Miss Julie” by Patrick Marber. Some of you will no doubt be familiar with the original “Miss Julie,” which addressed itself to the subject of power, playing out as a romance between a servant and a footman that masks a constant, and deadly serious, game of one-upmanship. Marber’s version relocates the play to Churchill’s England and updates it to the time period, but retains the play’s essential story. It’s a play that demands to exist in an opulent setting, a constant reminder that whoever wins this battle of class and privilege, it’s a war waged under the roof of the truly wealthy and privileged, and so any victory will be pyrrhic. Anybody who has ever visited the James J. Hill House knows the sense that it gives, best summed up by F. Scott Fitzgerald, who grew up in the shadow of the building: that the rich are different. They’re not just different; in “Miss Julie,” they always win.