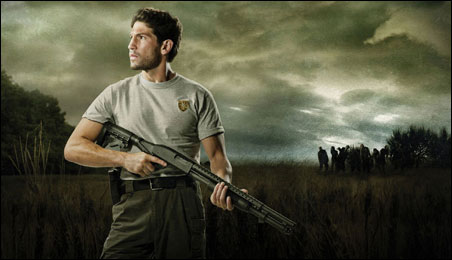 Courtesy of AMC
Jon Bernthal as Shane Walsh in AMC’s “The Walking Dead.”

We’re halfway into the newest season of AMC’s “The Walking Dead,” and last night offered up what the station was calling a “mid-season finale” — a cliffhanger to keep audiences interested as the show goes on a several month hiatus.

This season has been one that has gotten a lot of audiences complaining. It is, after all, a post-apocalyptic drama in which a group of survivors do what they can to survive in a world overrun by a plague of zombies. And yet this entire season so far has been a long idyll at a country farm, somehow mostly untouched by the end of the world, where the living dead only infrequently wander by. And, even then, they’re more likely to get trapped in quicksand or fall into a well than to menace anybody. Most of the season has revolved around searching for a lost little girl, and exploring the group dynamics, which are, at best, fraught.

This is a dramatic shift from the show’s source material, a comic book by Robert Kirkman. There was a farm in the original, but nobody stayed there long. The world was overrun, and the comic book gave its character no shelter and no relief. Anybody might die at any moment, and the only way to extend your life further was to keep moving, beyond the point of exhaustion, beyond the point of reason. Audiences were likely expecting that — it was what the show offered in its first season.

Between the first and second season, the show suffered a loss in budget — AMC has enjoyed some new success in the last few years, especially on the heels of “Mad Men,” but has scaled back badly, finding it impossible to fund its remaining programs as “Mad Men” demanded a larger and larger share of its annual budget. “The Walking Dead’s” creator, filmmaker Frank Darabont, quit over budget disputes, leaving the show without its primary author. And so, for many audience members, the show lost its focus and its excitement, becoming mired in the middle of nowhere, and turning soap opera-ish, with its plot points revolving around unexpected pregnancies, interpersonal feuds, romantic entanglements, and barely-kept secrets.

I can understand this complaint, but I don’t share it, not entirely. I wrote about this show at the end of its first season, and talked about how it is heir to the creator of this particular type of horror story, filmmaker George Romero. In his world, zombies were less malevolent forces of evil than a supernatural natural disaster, more akin to an earthquake or flood than a cinematic monster. His interest was in how the survivors responded to the disaster, and, especially, how a disaster might bring out the very worst in people. In Romero’s world, catastrophe tests the souls of survivors, and often finds them coming up short.

“The Walking Dead” has been precisely that, but, thanks to the fact that it is a television show rather than a two-hour film, it has done so in slow motion. It hasn’t always done so well — there is a character named T-Dog, the show’s sole surviving African-American character, whom the writers manage to give one line of dialogue per show, if he is lucky. Further, without the ongoing menace of swarms of zombies, there is no urgency to the show’s interpersonal problems, and so they just seemed to get rehashed week after week, neither leading anywhere nor getting resolved. Even for the most patient audience member, it gets a little exhausting watching Rick, the group’s ostensible leader, go in one more time to meet with Hershel, who owns the farm, to argue about whether they can stay or not.

And a few episodes ago the show offered an innervating surprise: Hershel was keeping zombies in his barn. But zombie movies are not stage plays, in which, as per Chekhov, you introduce a gun in the first act and use it in the last. In zombie movies, if you introduce zombies in the first act, they must be used in the first act, or they lose their menace. But the show meandered, going about its soap-opera details, with the barn always looming in the background, reminding us that the show had boxed its natural catastrophe away, seemingly successfully.

Until last night, that is, when all of the plot points came to a head in a short, brutal sequence outside the barn. And I think last night’s episode finally figured out how to dramatize what it has been trying to express. There are movies set long after the world has ended, in which the unscrupulous have taken power and lord it over people who have scruples. This show has slowly watched as one of its characters began to turn into that. The character is Shane, a former police officer who sees the new world without pity. He has argued throughout this season that the group should abandon their search for the lost girl, and he has made a series of very hard choices, including killing one character so that another could survive.

As it happens, he’s usually been right. He’s done as much as anybody in the show to protect the group, and he’s responsible for training the group members to use firearms. As soon as he learned there were monsters in the barn, he took action to clean up the problem, arguing that it immediately and directly imperiled the group — and, again, he was right, as the original comic book had the barn sequence ending very badly. And, without giving too much away, it turned out that he was right about abandoning the search for the little girl, which was, if you’ll excuse me saying so, a dead end.

And so the season went into its hiatus on a wonderfully ambivalent note. Our temptation is to sympathize with the group’s leader, Rick, who is compassionate and reasonable. But his leadership has been paternalistic and fraught with problems, and a number of his decisions have directly imperiled the group. It is Shane who has made the better decisions, despite them being distasteful. And even though he is turning into an apocalyptic villain, his decisions have always been justified by is desire to make sure his group is safe — a concern that is often not returned.

This is what is best about television nowadays. Shane is a character who, in a film, we would meet as a villain, and, if we met him at this moment in the show, we might think him a villain. He’s the sort of character that could easily turn into the vicious, cannibalistic country boys of a film like “The Road.” But “The Walking Dead” has made this a trickier proposition, because it has had the time to show how somebody might turn into that, and how, every step of the way, the change has been motivated by necessity.

We’re left, at the end of this last night’s episode, with a very queasy proposition: That, when the world ends, such a man might not be a villain. He may, in fact, be a hero.

‘The Walking Dead’: Heroism and villainy at the end of the world