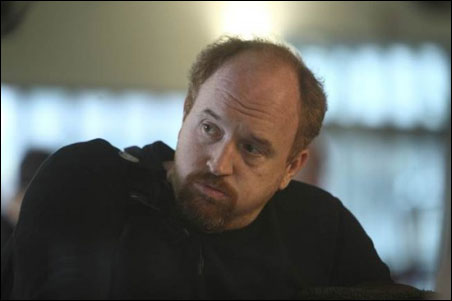 I respect comedian Louis C.K. for a lot of reasons, and it has increased with the release of a new concert film, as I shall detail. He’s started to see some real success for his work in comedy, but he’s 44 and spent a lot of years slogging in the trenches of the business. He’s written for quite a few shows, including both “The Dana Carvey Show” and “The Chis Rock Show,” both now seen as crucibles for great comic talent that nonetheless failed to find audiences. He was the screenwriter and director of a film called “Pootie Tang,” which has a significant cult following, but was excoriated by critics when it came out. He starred in a sitcom on HBO, “Lucky Louie,” that was canceled after one season. His new show, “Louie,” has managed two seasons on FX, to critical acclaim, but it’s quite unusual.

Like a lot of comics, Louis C.K. is inspired by George Carlin, but C.K. is a bit unusual in that he seems primarily inspired by Carlin’s process. Like Carlin, C.K. develops an hour of new material every single year, and then, at the end of the year, scraps the material and starts on a new hour. It’s laborious — the material is road-tested, and thrown away if it doesn’t work. There are stand-ups who have been doing the same 15 minutes worth of material, often very weak, for years or decades; C.K. throws out more material, of a higher quality, than these guys will ever produce. It may be why C.K. seemed so sanguine when rumors started to float that Dane Cook had lifted several of his comedy routines; C.K. can always write more.

And, as he himself has explained, this regular churn of material forces him to constantly dig deeper; it has produced an unusually frank and autobiographical comic, which sees its finest expression on “Louie.”

Let me offer an example from the show, an episode from 2010 called “Bully.” The episode is simple in structure. It begins with C.K. on a date in a pizza shop, where he is menaced by a young man, clearly showing off in front of his friends. Louie’s date is put off by C.K.’s frightened obeisance, and so Louie surreptitiously follows the bully home, where the young man lives with his parents. There is a brief confrontation, and the episode concludes with Louie sharing a cigarette on the back porch with the boy’s father, awkwardly discussing parenting.

Embedded in that simple structure is a world of shame. The bully’s interaction with Louie is genuinely menacing, but, as soon as it has ended, something worse comes up: Louie’s humiliation at not having stood up for himself, compounded by the fact that it happened in front of a woman Louis found attractive.

Louie C.K. handles much, or most, of the writing, directing, and editing tasks for the show, and he favors hand-held cameras and documentary style editing, so his show doesn’t feel like a sitcom. Not only is there no laugh track, there are almost no punch lines. Instead, we get an episodic collection of pungent slices of life, filled with little embarrassments, and characters whose interactions are often awkward and fraught.

If this doesn’t sound like the sort of sitcom you usually see, it’s because it isn’t. Louis C.K. made a deal with the network that he would have complete creative control of the show, in exchange for bringing it in with a very low budget. The shows typically cost under $300,000, and are shot on digital camera and then edited by C.K. on his laptop Mac computer. By comparison, Jerry Seinfeld was paid $1 million per episode during the final season of his self-titled sitcom. Tim Allen netted $1.5 million per episode for “Home Improvements.” Each of these actors made enough money per episode to retire on; were Louis C.K.’s only income from this show, and it were to end today, I suspect he wouldn’t have very much left in the bank from it.

He traded financial security for artistic independence; moreover, his contract can be seen as a reckless experiment in developing a new, artist-controlled model of television production, and that’s what I respect the most about him. We’re in a time when new models are very badly needed, as the past 20 years, especially since the advent of online digital media has thoroughly borked previous models for the creation and distribution of media. But experiments like C.K.’s are risky. They’re awfully time-consuming and may not pay off. Fortunately, Louis C.K. might be exactly the right artist to make these attempts, as so much of his career has consisted of time-consuming projects that did not pay off. He has the wherewithal to take the risks and plow on, and the advantage of doing so is that, at least, he gets more control of his own creation.

The most recent example of this is an especially risky experiment: His recording of a live show called “Live at the Beacon Theater.” C.K. has previously recorded his live comedy act and had them distributed through mainstream sources, such as HBO and Comedy Central, but the former market has dried up and the latter imposes odd preconditions, such as cutting out swearing. In 2009, C.K. independently produced a comedy special called “Hilarious,” which he then shopped around, eventually selling it to Epix and Comedy Central; the whole process took two years. So for his latest project, C.K. produced and distributed his special independently, selling it directly to the public through an online site.

And he took an even greater risk with this. First, he priced it almost impossibly low. A DVD of new comedy material will generally sell for about $20; C.K. sold his for $5. And he released it without any sort of technical constraints that would make it difficult to pirate, all of which are easily bypassed anyway. Instead, he posted a direct appeal, asking people not to pirate the footage, as he had paid for it with his own “stupid money,” as he put it. The digital video was almost immediately available on Pirate Bay, a famous (or, depending on your viewpoint, notorious) digital pirating site. But what also went up on the site was a long discussion between users about the ethics of bootlegging C.K.’s concert; many were opposed. Some weren’t, and went ahead and downloaded a free copy, but there will always be some of this in this new digital era. The question was: Would enough people download it at $5 a pop for C.K. to make a profit on it?

In a recent statement, C.K. explained just what the risk was in this. First, it wasn’t cheap — the whole kit and caboodle, including the cost of creating the web page, was somewhere north of $200,000. Worse still, he had blown his current comedy set — once he released the concert, an hour’s worth of material was done, and he would have to create new material.

In the same statement, C.K. says that the experiment was a success. In 12 hours, there had been enough downloads at $5 to pay for the project. Four days later, there have been enough legal downloads for him to turn a healthy profit (although modest, by Hollywood standards). And people are still paying $5 to download.

Now, this model won’t work for everyone, or, at least, won’t work as well — C.K. benefits from a reputation for quality and a name recognition that he has built over decades doing stand-up. But, for artists in his position, it does demonstrate that they can produce their own product and market it directly to their audience, and they will see a profit from it. There has been a lot of nervous talk about the web destroying the ability of an artist to make money, because there is no longer any incentive to pay the artist for anything that can be freely duplicated, but there was always supposed to be a flip side to that: That an artist can use these new digital tools to create relatively inexpensive projects, market them directly to his or her audience, and make enough back for the investment to be worthwhile.

There have been a lot of little successes in this undertaking — online comics publishers who have been able to pursue cartooning full-time, and niche musicians who are supported by their online community. But this is the first time I have seen a comic of C.K.’s caliber and status make this attempt, and he has demonstrated that it can work for him too. It helps that he approaches it with a different attitude than old media, who behaved like robber barons, strip-mining the world for talent and selling it to audiences at a premium, with their goal to make as large a profit as possible. C.K. approaches the making of money differently: That it is just part of the process of engaging in a creative undertaking, and only part of what makes it worthwhile. And, even then, it’s best used as fuel for further creativity. In his online statement, he sums it up as follows:

“I learned that money can be a lot of things. It can be something that is hoarded, fought over, protected, stolen and withheld. Or it can be like an energy, fueled by the desire, will, creative interest, need to laugh, of large groups of people.”

In praise of comedian Louis C.K.