I have been reading F. Scott Fitzgerald’s Pat Hobby stories (available online here), and they’re great, and almost completely forgotten. There’s something about the way we see the world that allows us only to allot one masterpiece to an author, and Scott has “The Great Gatsby.” And then, if we are particularly interested in an author, there will sometimes be a book or two more that is recommended, in this case “This Side of Paradise” or maybe “Tender Is the Night.” And then, if you dig deeper, you’re left to explore an artist’s odder, thornier, and sometimes more interesting work on your own. The Pat Hobby stories are very much that. 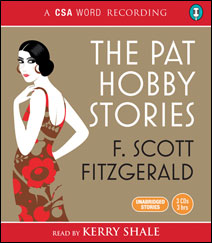 Courtesy of CSA World
F. Scott Fitzgerald goes to Hollywood: The cover of the CSA Word audiobooks of the Pat Hobby stories

The shame of it is, were I to compile a genre of great, bitter Hollywood tales, Fitzgerald’s Pat Hobby stories would be right at the top, alongside Nathaniel West’s “Day of the Locust” and Horace McCoy’s “They Shoot Horses, Don’t They.” All told of life on Hollywood’s margins, where squalid people live awfully while struggling with the scraps the entertainment industry throws them. West’s and McCoy’s novels are bleak, whereas Fitzgerald’s stories are comic, but it’s a comedy shot through with disappointment.

Fitzgerald made three trips to Hollywood, always convinced that he might make it big there. He was bad with money — he and Zelda, when they were together, lived lavishly on a lifestyle far beyond his income as a novelist. Additionally, Fitzgerald was something of an anomaly among literary writers who fled for the coast, in that he took motion pictures seriously as an art form; others had contempt for it. Novelists tended to have a poor time of it in the film industry — it was a notoriously miserable experience for William Faulkner, as an example. (His experiences, and playwright Clifford Odets, inspired “Barton Fink.”) And Fitzgerald, whatever his intentions, didn’t fare better, probably in part because, whatever his seriousness about the medium, he approached it as a dilettante, spending relatively short periods in LA before leaving. He might have mastered the form had he given it more time, but screenwriting is not novel writing, and skills in one area do not necessarily translate into skills in another. And Fitzgerald’s stories are not especially cinematic — attempts to turn his novels into movies have been, at best, fitfully successful.

But if he couldn’t write a movie, he certainly could write Hollywood stories. When Fitzgerald first tried Hollywood, he was very much an alcoholic, leading him to embarrass himself at an industry party (which he fictionalized in a story called “Crazy Sunday”). From then on, he apparently had a reputation as a souse, despite the fact that, on his third and last attempt to break into Hollywood, his health had deteriorated to a point that he mostly avoided alcohol. In fact, he had a heart attack at the famous Schwab’s drug store in West Hollywood in 1940, the same neighborhood where he would die shortly afterward at age 44. (In a weird coda, “Day of the Locust” author Nathaniel West had gotten to be good friends with Fitzgerald, and was reportedly so distraught over his death that he lost control of his car, killing himself and his wife.)

But before Fitzgerald died, he produced 17 short stories about a man named Pat Hobby. Fitzgerald apparently wrote the Pat Hobby stories as a way to make some additional money, which shouldn’t be held against him, as he was always pretty mercenary with his writing talent. The stories themselves are great, and start with self-parody.

Pat Hobby is a failed screenwriter and an alcoholic, and every story tells of a scheme gone awry. Hobby’s defining feature is a sort of inept ruthlessness. Unlike many Hollywood narratives, these stories depict Hobby not as a man trying to scratch his way to the top; he is, instead, trying to scratch his way out of a hole, and he doesn’t know how to scratch. Like Fitzgerald, Hobby once had success as a writer; unlike Fitzgerald, his success was in film, in the early days of the silent pictures, and he occasionally moons for those years, although his memory is suspiciously self-serving.

Mostly, though, he malingers around the lots of Hollywood films, picking up odd jobs that he stumbles into or gets out of pity, and generally bungling these. Fitzgerald’s Hollywood is an odd sort of meritocracy. Talent will be rewarded, but so will scheming, assuming it is done well. But Hobby is a terrible schemer — if he steals a hat to hide his identity (as he does in one story, which is an act of pure vanity on his part, as he’s afraid he’ll be recognized from working a humiliating job working in a tourist hotel), an entire studio will shut down as a director searches frantically for his lost homburg. Hobby might gain work as an extra — entirely by accident, as he wanders onto a set while a film is shooting, and so winds up in the film — but it will involve him wearing protective armor to get run over by a truck, and he will faint from terror. He’s a classic comic character, a schlemiel and a schlemazel in one person — given a bowl of soup, he’ll be both the one to spill the soup and the one the soup spills on.

It’s impossible to know precisely what was in Fitzgerald’s mind when he wrote these stories. Did he see himself as a sort of Pat Hobby character, and this was his way of turning his disappointments in Hollywood into fiction? Or did Fitzgerald simply decide to parody the large number of unhappy failures who floated at Hollywood’s edges, characters that, in Nathaniel West’s and Horace McCoy’s novels, actually go mad and become murderous?

Whatever the case, Fitzgerald was working a bit ahead of his time with these stories. The structure he used in the stories, of incompetent ambition leading to entertaining chaos, is one that would become a mainstay of the sitcom a decade later. Lucille Ball’s endless attempts to break into show business in “I Love Lucy” is a sort of genial version of the Pat Hobby stories, although it would be another half-century before situation comedies really indulged in the sort of protracted humiliation Hobby endures, and just how loathsome a character he is. He certainly could have been a character on “Seinfeld,” and would really have come into his own in this era of “The Office,” where scenes of public shame have become a vital part of comedic storytelling.

Fitzgerald may have failed writing for movies, but it’s really that he was too early, and in the wrong medium. Nowadays, he’s be a star in the world of television.