The Twin Cities are littered with the Peanuts gang. Starting in 2000, local artists took 101 statues of Snoopy, decorated them with mirrors or splashes of paint, and propped them up throughout town. They were then auctioned off, and the winning bidders, often as not, placed their Snoopys outside, so the public could continue to enjoy them — or be offended by them, depending on their aesthetic. Somebody — presumably of rarefied and delicate tastes, and yet with the impulses of a street tough — beheaded one of the Snoopys in August of that year.

Undaunted, St. Paulites have continued to mass-produce and decorate Peanuts characters, including Charlie Brown and his perpetual nemesis, Lucy Van Pelt. And why not? Charles Schulz is one of the Twin Cities’ most successful natives. Never mind that he lived in Santa Rosa, Calif., for most of his professional career — Peanuts borrows from Schulz’s Midwest autobiography. Charlie Brown, after all, was named after a Minnesota classmate; Brown’s father was a barber, like Schulz’s; Brown’s ongoing unrequited love, the little red-haired girl, was based on one of Schulz’s coworkers at Art Instruction, Inc., a correspondence art course in Minneapolis. 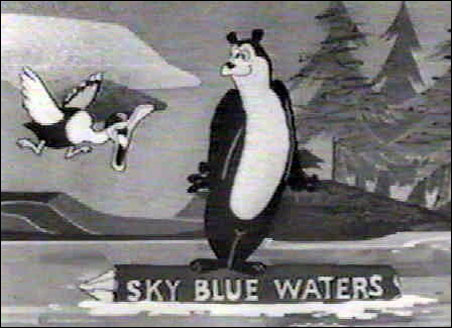 So we end up with Sparky Schulz’s neurotic ankle-biters everywhere. Yet, somehow, it is a different statue that feels somehow truly Minnesotan. A statue of the Hamm’s Bear stands in the 7th Street Mall in St. Paul, and it’s the result of quite a struggle. The Rake reported in 2004 of the red tape a citizen’s committee was experiencing in their attempts to put up a statue of the Hamm’s cheerful, sport-loving mascot. At the time, a committee member blamed “political correctness,” The Rake related. “Last year, their effort to put the bear statue in Como Park was shot down by the St. Paul City Council, with Council Member Jay Benanav comparing the Hamm’s Bear to the Marlboro Man and colleague Chris Coleman labeling the character ‘schmaltz art.’ “

Schmaltz art it may be, but the unnamed Bear is one of the Midwest’s most beloved characters. Hamm’s itself repeatedly put the Bear into mothballs, as reported in Moira F. Harris’ book “The Paws of Refreshment: The Story of Hamm’s Beer Advertising.” Without the Bear, the product suffered — every time. When Pabst bought the Hamm’s label in the ’80s, they were determined the keep the Bear as public as possible. “We always show the bear,” a Pabst official said. “People remember us because of the bear and expect to see him.”

But why? Well, there were a few things the Bear had going for him. First of all, he benefited from a charming design. He’s a classic example of the sort of boldly drawn spokes-character that came into prominence in American advertising design in the mid-20th century; he keeps company with such instantly recognizable visuals as the Michelin Man, Mr. Peanut, and fellow Minnesotan The Jolly Green Giant. Depending on whom you ask, the Bear was either created by former Disney animator Howard Smith or by a Chicago advertising art director named Cleo Hovel. Both men worked on the Bear’s television commercials, and, whoever was responsible for the Bear’s design, they got it right. Friendly, paunchy, and eventually sporting a shock of tousled hair, the Bear proved to be an enormously expressive animated character.

The Bear was a sportsman — he was occasionally even shown logrolling, a lumberjack’s sport and one common to Minnesota’s early history. But, as sportsmen go, the Bear wasn’t a very good one. His cartoons would frequently end with the Bear humiliated, either by his own incompetence or by duplicity on the part of the various animals whom he played opposite in some sort of intramural forest league. The Bear took defeat graciously; it was part of his appeal, and Hamm’s knew it. When Hamm’s sponsored a Winnipeg-to-St. Paul snowmobile race, the company provided a very Bear-like prize for “True Grit.” The winner of the prize was the contestant who overcame the most adversity to reach the finish line. One year’s winner, as The Paws of Refreshment reports, “broke one of his machine’s skis, crashed into another snowmobile coming around a blind corner, blew three clutches (and replaced them), and drove the last 50 miles without chaincase oil after the case cracked.”

Additionally, Hamm’s had a terrific theme song that they played behind the Bear in his commercials. (No, not the “Young Adults” theme to be found on the 365 Days Project Web page, although I must confess to a fondness for that one.) Borrowing its melody from Rudolf Friml’s “Natoma” and boasting a propulsive tom-tom beat, the theme sang cheerfully of Hamm’s place of origin. In rhymed couplets parodying Longfellow’s “Song of Hiawatha,” the jingle went as follows: “From the land of sky-blue waters, from the land of pines, lofty balsams, comes the beer refreshing, Hamm’s the beer refreshing.” Once heard, the theme could not be forgotten. Interestingly, although the drum beat behind the melody sounds Native American, its source of origin is further south than that: Advertiser Ray Mithun based it on recordings of Haitian voodoo drumming, and the rhythm was actually beaten out on an empty carton of Star-Kist tuna cans.

So there you have it. All it takes to make a memorable animated product mascot is a St. Paul beer, a Disney animator, a Chicago advertiser, a Hawthorne poem, and Voodoo drumming. Charlie Brown might have had emotional complexity, but, good grief, he was nowhere near as culturally complex.