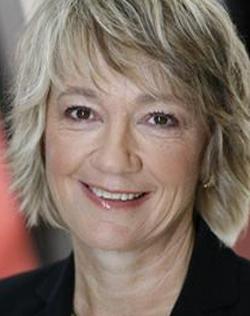 Former WCCO-TV reporter Caroline Lowe, who worked at the station from 1977 to 2011 (after starting her career with KSTP-TV), is contemplating another career change. Since moving to San Luis Obispo, California to work for KSBY-TV in a combination managerial-reporting role, Lowe has finished most of the work to get a California private investigator license.

In a recent Facebook post, she alluded to an idea about a website for cold cases. Viewers here will remember Lowe’s dogged pursuit of the Jodi Huisentruit story, the Minnesota-native and Mason City, Iowa TV anchor who disappeared in 1995 and was declared legally dead in 2001.

In a brief phone conversation, Lowe said she won’t finalize any plans until sometime in June, but that she’s been encouraged by friends watching the evolution of the fact-based media game to consider a number of possibilities. Among the more tantalizing ideas are a series of podcasts a la “Serial,” the startlingly successful podcast by the creators of This American Life, which dramatically told the story of a 1999 murder in Baltimore. At last count, episodes of Serial have been downloaded more than 65 million times.

“I want to get a cold case web site up, to at least let the families know their people have not been forgotten,” said Lowe. “At the very least I want that out there. My hope is to get that done by June. That’ll be 20 years since the Jodi Huisentruit disappearance.”

Among the fans of “The Wire,” routinely and deservedly cited as being one of the best television series ever produced, is a certain Barack Obama. A couple years back, the President was being interviewed for a podcast by Bill Simmons, of sports/entertainment online outlet Grantland, and the conversation turned to HBO’s classic story of cops, newspaper wretches, bad schools, politicians and the street culture of inner city Baltimore:

Bill Simmons: Settle an office debate. Best Wire character of all-time?
Obama: It’s got to be Omar, right? I mean, that guy is unbelievable, right?

Sometime later, Obama elaborated, noting that of all the corruption swirling through the storylines, Omar Little, the gay street enforcer/avenging angel, was the only character who both had “a code” and lived by it. Aware of his influence on impressionable youth, the President quickly added that he was not exactly endorsing Omar as a role model.

Anyway, yesterday the President turned the tables on “Wire” creator David Simon, the ex­-Baltimore Sun newsman, asking Simon’s view of the country’s long and not­ exactly effective war on drugs.

A report on the meeting, from Jordan Charlton at TheWrap.com, includes this: “ ‘I’m a huge fan of The Wire,’ Obama opened the interview saying. ‘It’s one of the greatest not just television shows but pieces of art in the  last couple of decades.’ ”

The conversation with Simon, with the President conceding that the way we go about dealing with drugs is not smart, is well worth the 12 minutes of your time.

Late last year HBO released a remastered, Hi­Def set of “The Wire.” The original camera work, shot in the square 4:3 ratio for old­-style TVs was not, as most agree, it’s finest attribute. Compared to series like “Breaking Bad” and “Game of Thrones,” where great attention is paid to visual composition and detail, “The Wire” looks dated.

Simon is not entirely pleased with the new spiffed­-up version, cleaned and converted to the more cinematic 16:9 ratio of modern flat panel sets, but understands the need to  keep it fresh for new audiences.