As surprises go, the sale announced this morning of alternative weekly City Pages to the Star Tribune rates something like a four on the 10­-point media Richter scale. City Pages’ parent company, Voice Media Group, has been through a blizzard of iterations over the years, most recently separating its print operations from its most problematic web entity, backpage.com. More critically, pounded by the same advertising downturn as practically every other publisher, City Pages’ editorial hole and staffing levels have all slumped.

Point being, some kind of change was due, if not inevitable.

But while the net effect of ownership­ by ­Strib may be an upgrade in terms of the paper’s life expectancy, City Pages’ traditional attitude and “independence” are separate questions entirely.

One immediate casualty of the deal was Ben Johnson, author of City Pages’ “Blotter” page, a lively, rolling log of news items. (Johnson, a Plymouth native and — ironically — once a part of the Strib’s so-called “two-tier” reporter concept from a couple of years back, was one of only two staffers let go immediately, the other being designer Holly Hilgenberg. Johnson’s departure is perhaps one reason the CP website had, as of Wednesday afternoon, not yet posted news of the sale.)

The staff had received notice of a mandatory meeting this morning at 9 a.m. “Everyone was pretty nervous,” Johnson says. “We weren’t sure exactly what was going to happen. But after the meeting Pete [Kotz, CP’s editor] went out and had a smoke, came back in and tapped me on the shoulder.”

He says the general reaction was positive in terms of the option for union representation through the local Newspaper Guild, a move that means pay and benefit increases, though worries about more layoffs persist. Johnson’s now former boss, Kotz, says lay­offs were and will be determined by the Strib.

Johnson says that beyond job security, the issue of independence was foremost on the staff’s minds once the deal was outlined.

Steve Yaeger, the Strib’s vice president of marketing, says for the record: “We’re not looking to apply a heavy hand here. We’re just not interested in that.” He reiterates what he told the Strib’s Evan Ramstad. Namely, that the big company likes the relative financial health of City Pages, and it’s younger and more female (than the Strib) readership demographic.

An important facet of the deal is the demise of the Strib’s in-­house organ for young demo outreach, vita.mn, which will cease publication. (Yaeger expects the deal to close “within a few weeks,” and says City Pages will remain in its North Loop offices.)

What he is less pleased with are City Pages’ dare-we-say sleazy sex ads, which provide a significant flow of revenue, but one that reflects rather badly on a mainstream family publication like the Star Tribune. Yaeger makes the point that “commercially ­licensed” advertisers are welcome, but the Strib “reserves the right” to 86 others. Given the repeated role of such ads in sex-trafficking cases, watchdogs will bark loudly if the Strib takes a laissez-faire attitude toward that matter. (The worst of the worst ran on backpage.com, which no longer appears in City Pages.) 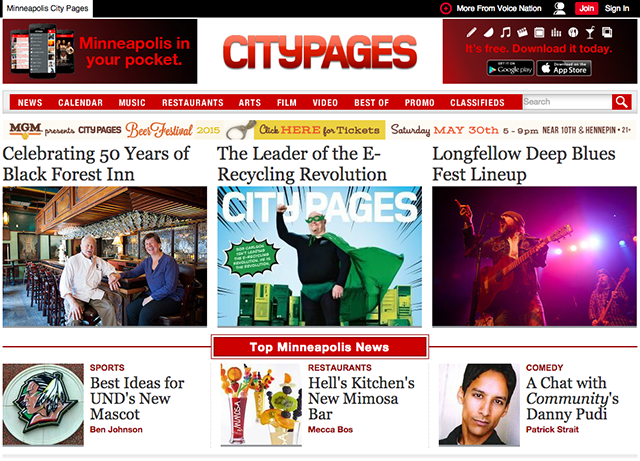 “Blotter” page author Ben Johnson’s departure is perhaps one reason the City Pages website had, as of Wednesday afternoon, not yet posted news of the sale.

Two other facets of the “independence” question that come to mind are these:

First, the “duplicative” nature of some areas of coverage, especially those where City Pages is still using regular, local writers — food and music being the most obvious beats. Yaeger believes there’s plenty of material to occupy both entities. But you have to wonder how this plays out over the months to come.

Second, since their inception, a significant part of the “charm” of alternative weeklies has been their unabashed progressive political slant. Where the buttoned-­up mainstream feels ethically obligated to lend equal weight to arguments from both (or all) sides of an issue, City Pages, in spite of the corporatizing forces of recent years, still goes places that are off-­limits to Strib writers. Put another way: The target demo likes impertinence.

A prime example being reporter Cory Zurowski’s persistent (and often quite funny) pillorying of U.S. Rep. John Kline. In his most recent posting, Zurowski wrote: “In keeping with tradition, John Kline, Minnesota’s Most Reprehensible Congressman (TM) and a retired Marine colonel, voted against his military brethren.”

Critics of Kline’s close relationship with for­-profit colleges and other matters may snicker with delight, but will a City Pages under the aegis of the Strib and Strib owner and life­long Republican Glen Taylor abide by that level of snark? “Independence” won’t mean much if they don’t.

Then also you have to wonder what would have happened to Tom Goldstein’s 2012 cover story on the myth­making surrounding the Vikings’ $1.2 billion stadium, a project promoted by the Strib? Would the paper, in the interest of “independence,” have paid actual money to look as bad as Goldstein portrayed them in that piece?

Kotz, City Pages editor, laughs and says, “Well, I don’t have any other Star Tribune stories in my queue at the moment. But I have to tell you, they don’t seem to want to make any big changes. They’ve been pretty straightforward about that. I mean, if they tried to make us into the Star Tribune Lite, I think they know that wouldn’t work very well.

“They seem like smart guys, even kind people. All the things you’re raising are questions you expect to hear when a big company buys a smaller company like us. The fear is always that there’ll be a run of corporatizing, and we expect people to have those reservations until we prove otherwise.

“I just don’t think these guys are the same old newspaper rubes. They get the new media. Cory Powell [the Strib’s managing editor for new products and innovation] is my corporate overlord. I don’t think he’ll mind me calling him that, and he gets the new environment.

“So let me assure you, we will still cover John Kline, and the reason, I want to say, is because I don’t think he serves his constituents very well.”

Will a Strib-owned City Pages keep its attitude and independence?