One of the problems with having “a frank national conversation” about any topic, race and police violence included, is that a lot of people, especially the most ardent partisans, have a default mechanism that demands their view be at center stage and sucking up the most air.

Case in point: the flap this week over Minnesota Lynx players wearing warm-­up T-­shirts expressing their views on the killing of Philando Castile, the five Dallas cops and other recent violence. Four off­-duty city cops walked off their free-lance security jobs at Target Center in protest and Minneapolis Police union president Bob Kroll weighed in, like a sledgehammer on a moth, a move that earned his remarks the apt description of “jackass” from Mayor Betsy Hodges. Additionally, we had an op-ed and an editorial in the Star Tribune that whipped up enough hostile emotion that protesters took their cause to the ground atrium of the paper’s offices.

And we’re not done yet. In some of the crannies of social media there were complaints that other than Mark Rosen, WCCO­-TV’s long-­tenured sports anchor, not one of the two cities’ hard­-boiled columnists, metro variety or sports, waded into the Lynx/Kroll episode, as ripe a target for passionate commentary as you could hope for. The predictable explanation for the Strib’s absence on the topic being that since Lynx owner Glen Taylor also owns the Strib, his employees know enough not to go and get all stupid and annoy the boss. Either that or, somewhat more plausibly, you don’t go publishing anything that gets reporters crosswise with the cops. It’s just bad mojo, access and source­wise. Bottom line, according to this analysis: Don’t add anything more beyond straight reporting.

Says Mark Rosen, “All I said, following a ‘Reality Check’ Pat Kessler did, was something to the effect of, ‘Sorry Sgt. Kroll, but the Lynx players have every right to speak up about something like this.’ I mean, the players did it in a very moderate tone in their pre­game press conference. And the shirts, right on them, had the shield of the Dallas Police. I kind of think the cops missed that, but I don’t know.

“What bothers me, really bothers me, though, with the attitude of Kroll, is this kind of ‘You run along now ladies and bake cookies’ thing. It’s a form of the old ‘Everyone has to stay in their lane’ thinking, where athletes should just play their game and stay out of the serious stuff going on all around them. I mean, what would Muhammad Ali say to something like that?”

Rosen said feedback on his comments was “98 percent positive, except for Twitter, which as we all know can turn into a sewer pretty quick.”

As I said previously, complimenting both WCCO-AM host John Williams and Strib gossip columnist Cheryl Johnson for bringing thoughtful perspectives to a hellaciously bad week in race and police relations, a fair chunk of the public segregates its news consumption in venues outside straight news reporting and what might be called academic give and take. A genuinely full, frank conversation about issues as indisputably critical as police­-minority interaction kind of requires people like gossip columnists and TV sports anchors to make their contributions. At the very least to expand the breadth of the discussion.

So what’s the problem with local sports columnists? You want subject matter that has at least been on the radar of every reader you’ve ever had? The combination of (championship) pro sports, PO’d cops and “jackass” is as juicy as it gets, with the possible exception of another Whizzinator incident.

“I hate to say it,” says Strib assistant sports editor Dennis Brackin, “but right now it’s kind of a staffing issue.” Sports columnist Jim Souhan, the most likely go­-to for an opinion perspective on the confluence of citizen ­athletes and cops, is currently on vacation. (A column on the Twins’ second-­half potential was written before he left.) Pat Reusse, who most of us would be interested in reading on something like this, “only writes a couple times a week,” and Jerry Zgoda is away from basketball working on Ryder Cup activities. (Reusse did submit a poignant piece on the white cocoon so many Minnesotans of his era grew up in.) Meanwhile, regular Lynx reporters Kent Youngblood and Chip Scoggins are temporarily stretched thin handling other duties. 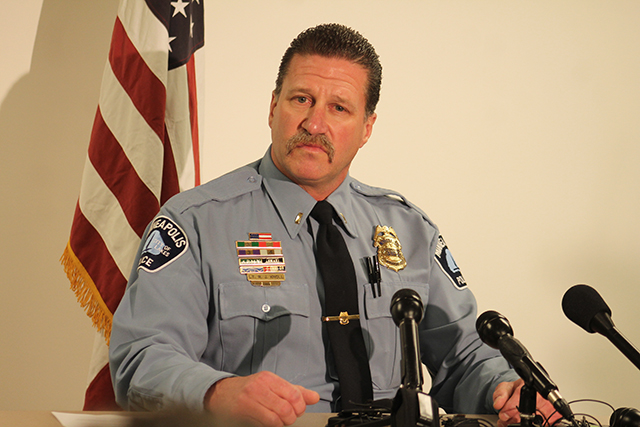 In fairness, Scoggins, Youngblood, Zgoda and Jim Paulsen, another reporter working on and off the local pro basketball beat, are solid meat and potatoes beat writers. Commentaries on white-hot social issues are not what they’re paid to do.

Brackin, who was in the midst of assembling a package for this Sunday’s section on athletes’ use of social media, defends his section’s coverage of the Lynx/cops/Kroll episode, which has been just fine, saying, “Personally, I’m not sure it needs commentary from us,” he said. “But if any of them, Souhan or Reusse, or any of the others want to write something about it we have no problems with that.”

Maybe, but as I say, when you have something as big as the Philando Castile killing roiling your front yard, and your local team (and local cops, and mayor) making national news for a related incident, there’s a beach ball waiting on the tee for anyone who dares to take a swing.

Strib editorial on I-94 shutdown

The Strib’s editorial page did that in the context of the Black Lives Matter protest that shut down I-­94 in St. Paul last Saturday. Partisans far to the left of Sgt. Kroll didn’t care for lines like this: “The decision to charge does not impede First Amendment free speech rights, but it does send an unmistakable message that when protest veers into violence and blatant lawbreaking, there will be consequences. As the Star Tribune Editorial Board has said before, the ‘occupation’ of freeways must come to a halt. Such reckless excesses do the movement no good, and the ensuing, hours-­long, nighttime standoff set the stage for the reprehensible violence that followed, whether protest leaders take responsibility for it or not.”

They were even less happy with ex-­cop Richard Greelis’ commentary on police reacting to the “gangster look” of (some) young black men. “It is a logical view for police, since it is based on years of dealing with this segment of society, day after day after day. This segment is very criminally prolific and dangerous. It has been known to deal, on a daily basis, in drugs, weapons, prostitution, rape, extortion and murder. We all know the Black Elephant in the Room.”

Greelis lost me if he was trying to make a connection between the gangbanger look and ‘tude and a guy, his girlfriend and a little kid simply driving down the street. But it was, and deserved to be, part of that “frank national conversation” fretful politicians and civic leaders are forever encouraging us to have. Who, after all, doubts that Greelis’ view is shared by a lot of cops, even those in far better control of their nerves than the guy who killed Castile?

Based on innumerable other hot­-button controversies over the years, my suspicion is that people raging at the Strib for publishing either piece are unfamiliar with or indifferent to the purpose of opinion pages. Not to belabor the obvious, but the point of that part of a newspaper is to air out a community’s ideological laundry — thoughtful, shuttered, soiled … whatever — in hopes of arriving at some set of shared perceptions. There’s no rule that says all of it must be pretty or agreeable to everyone. More to the point, you don’t want it to be.

But, in the context of the Lynx/Kroll matter, sports pages, generally an escapists’ sanctuary from realities uglier than the Twins won-­loss record, should be encouraged to add its voice(s) when something is this big and this hot and is raging at their front door.