As you may have heard — and, really, how could you not? — earlier this week the Minnesota State Fair announced the list of new foods that would be available at this year’s 10-day get-together: a diverse lot of 27 new treats with only a few deep-fried items (and none on a stick).

And, once again, that list was greeted with a media feeding frenzy. Soon after fair officials put out the list at 6 a.m., stories popped up on nearly every media website and TV news show in the Twin Cities. Not without reason. Last year, the No.1 story on KARE-11’s website was, yes, “Minnesota State Fair announces new foods.”

Which raises a pretty simple question: When did this become a thing?

This big coordinated roll-out of the new fair foods began in earnest about 10 years ago. Before that, reporters wouldn’t find about the new foods until the fair’s media guide went out shortly before the opening day, in late August. Or they’d hear about the goodies when fair officials would meet with representatives of the two daily newspapers and four television stations in the weeks before the fair. Of course, the paper or station that had the first meeting would get a scoop, of sorts.

Starting around 2008, the fair media team realized that they were sitting on some valuable information, and decided it needed to be released early and equitably. “The list had been dribbling out, a little at a time, and there was so much interest,” said Jerry Hammer, long time fair general manager.

Now they have the routine down. After the press release went out this week, fair officials stood by to give interviews, and samples of new foods were delivered to television studios. It was all done simultaneously, on Facebook and Twitter, so everyone got a fair — so to speak — shot at the story.

Dennis Larson, the fair’s food licensing manager, said: ”We’ve always had new foods, but there’s been a real spiraling of media attention in the past 10 years. It’s very lucrative.”

The attention is also a response to the changing nature of food at the fair — and the public’s expectations of it. “When we were kids, there wasn’t a big variety of food at the fair,” said Hammer, who’s in his 60s. “It was just a necessity because people were going to be here a while and they’d get hungry.”

“Before that,  years and years ago, there were 89 church diners. And then there were the old stereotypical deep-fried foods. the old joke was, ‘How much indigestion can you get for a quarter?’” he said. 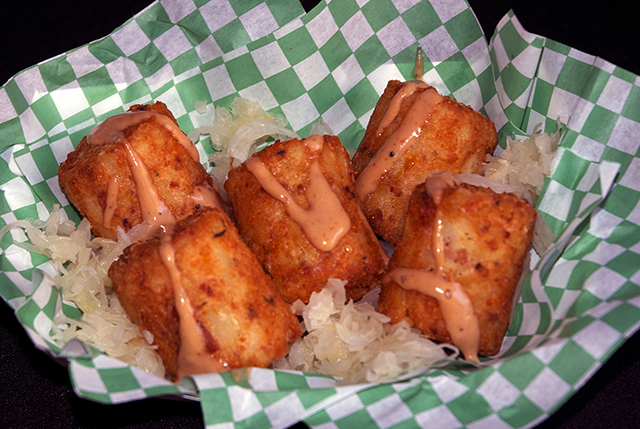 Courtesy of the Minnesota State Fair
Jumbo deep-fried tater tots can be purchased at O’Gara’s at the Fair.

Things have changed; fair food has become more culturally diverse and innovative. “Almost every one of these new foods this year would fit in nicely at a nice restaurant, served with table linens,” Hammer said. “But here, you get it on a paper plate.”

Larson said there were 70 formal applications for new foods this year. Only 27 made the cut. All foods offered, new and old, have to be approved each year by the fair. “We want the vendors to stick to their own genre,” Larson said. “Hamburgers stands can’t become hot dog stands.”

And when a vendor does introduce a new food, they’re supposed to give it at least a three-year run. “Sometimes there’s a small, but loyal, following that expects to find it the next year,” he said.

While some of the new foods ”have legs,” others are often “a flash in the pan,” Larson said. “My poster child for new foods is the deep-fried candy bars. Everyone wondered if it would work, but it’s still here.” Thinly sliced pig’s ears, though, came and went without much of an outcry.

Something old, something new

Although every food at the fair was new once, the old reliables continue to be the best sellers. In fact, just 10 foods make up 48 percent of all food revenue at the fair, with cookies, pronto pups, milk, pickles, French fries and roast corn being the top sellers.

Not surprisingly, the media frenzy also benefits food vendors who are offering the new products. The attention brings fairgoers around to the booths, either to try a taste — or at least see what they look like. 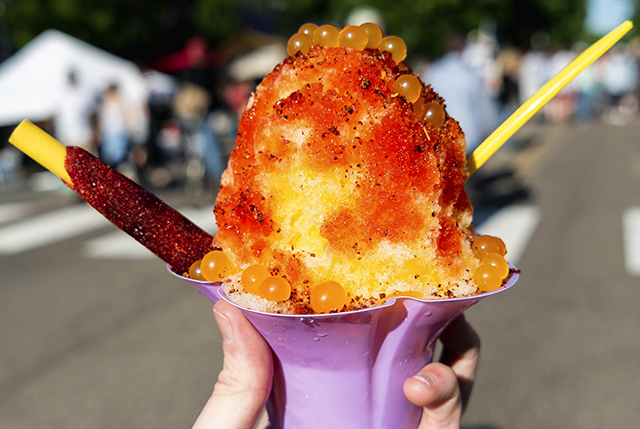 One long-time vendor, Nancy Hanson — whose family has sold “Almost a Foot-Long Hot Dogs” since the 1940s — said fairgoers often ask at her booths where to find the new stuff. “All the press really gets their names out there,” she said.