Two years ago, when he made the decision to tell the world about his diagnosis of bipolar disorder, KSTP-TV meteorologist Ken Barlow could only guess what kind of reaction he would get.

In 2007, after a lifetime of manic bursts followed by debilitating depressions, Barlow was diagnosed with bipolar I disorder. For five years, fearing that the truth about his mental illness could have a negative impact on nearly every aspect his life, Barlow told only a select few people about his diagnosis. And even those people were sworn to secrecy.

Barlow’s announcement at the 2012 NAMI-MN walk in Minneapolis’ Minnehaha Park made local news; a subsequent profile in the St. Paul Pioneer Press and an interview on KTCA’s “Almanac” followed. Emails and letters soon began pouring in from around the world. Before he knew it, Barlow, 52, had redefined himself as a public figure openly living with mental illness.

“It’s not like I planned this,” Barlow said with a laugh when he recalled his sudden announcement at the NAMI-MN walk, which he’d been asked to emcee, “but it’s been the best thing I ever did. It just came out. I felt this immediate release of stress, anger, of all that stuff that I’d bottled up for all those years. And the crowd clapped. I wish I would’ve done this seven years ago. I don’t know what the future holds. I don’t know if this diagnosis would be held against me if I ever were looking for another job. That’s definitely a concern, but what I’m getting in return from people is so huge.”

What Barlow said he’s getting in return is an overwhelming show of support and a new perspective on life. These days, he’s become a mental health activist, sharing the story of his struggle with bipolar disorder with community groups, students and health care professionals. And his family has rallied around him, too, supporting his new policy of public honesty and openness.

This fall, Barlow and I met for coffee near his Maple Grove home. He talked candidly about a number of issues, including his heartening public support, how he works to maintain emotional equilibrium, and his new views on perfection — and humility.

MinnPost: Tell us about hiding your diagnosis.

Barlow: It turns out that for me the hardest part of this diagnosis was hiding it. When you’re a public person, everybody thinks you must be perfect. You have the perfect hair, the perfect suits. You even wear makeup on camera. You’re presented as no flaws. So when I was first diagnosed in 2007, I put up all these barriers. I was horrified, because I pictured everybody with a mental illness as “One Flew Over the Cuckoo ’s Nest” or a murderer. That’s all I ever really heard about mental illness.

I was ashamed and embarrassed. My wife helped me build up walls. It got so bad she would go to the drugstore and pick up my prescriptions because I didn’t want people to see me with my medications.

After my breakdown, I got home from the hospital, sat at the computer and typed in “famous people with bipolar” because I wanted to know what the hell I had. Ben Stiller came up, and I thought, “He’s funny. I never knew he had bipolar.” Winston Churchill came up and then Britney Spears. Two out of three ain’t bad. It made me feel better to know that all these people who were seemingly “normal” had this illness.

And then, when I finally got the nerve up to tell people about my mental illness, I hoped that maybe I could help other people realize that you can be a dad and a husband, you can have a car and a great job and you can have bipolar or some other mental illness.

One out of four people in the United States has some form of mental illness. We are people you know well and see every day.

MinnPost: Is mental illness part of your family history?

Barlow: I was 45 when I was diagnosed with bipolar disorder. When I told my mom about my diagnosis, she said that Dad had had it, too, which came as a shock to me. He never talked about it. He was embarrassed, and he passed that embarrassment on to me.

My dad wasn’t diagnosed with bipolar until he was 60, and he died when he was 68, a few years before I was diagnosed with the same disease. The only indication I had about his condition was after he died, when my brothers and I cleaned out his room and I found a bottle of lithium in one of his drawers. I didn’t know what it was. I thought it must be a vitamin. We just got rid of the pills and didn’t ask my mom about them because she was so distraught. It just never crossed my mind that my dad had a mental illness, but, now looking back on his life, I can definitely see patterns in his behavior that I see in mine.

MinnPost: What has been the public reaction?

Barlow: Amazing. First, after I spoke at the NAMI walk, I got supportive emails from about 20 people. Then the St. Paul Pioneer Press did a big article on me, and I got hundreds of emails. Then I did an interview on “Almanac,” and I got hundreds more. Even today I’m still getting emails.

I think I’m up to 2,000 emails and letters by now. I’ve answered every one because they were all unique stories. People write things like, “My dad had it. Thank you so much,” or “Now I understand my brother.”

You’d think that in all of those emails, there’d be at least one person saying something negative about me and bipolar disorder. But there hasn’t been one negative letter. I know there are people out there who have bad stereotypes of what it means to live with a mental illness. They’re out there, but they haven’t made themselves known to me yet.

It turns out the biggest discrimination I ever experienced was my own fear. After I started talking about my diagnosis, I told myself, “My daughter’s friends’ parents are never going to let them come over to our house and have a sleepover because they think her daddy’s nuts.” That would’ve been so easy for them to do and none of them did it.

And then my wife and I talked and I asked her, “What would happen if so-and-so doesn’t ever want to be with us again?” She said, “If they are going to turn their backs on us right now after all this time, we don’t need them.” And nobody did.

MinnPost: What’s it been like going from patient to activist?

Barlow: Since I told the world about my mental illness, I’ve been busy. This fall, for instance, my whole family participated in the Stomp Out Suicide Walk in Wyoming, Minn. A few days later I went to Duluth to do a talk at a conference of community health providers. Then I came back the next day and worked at a walk in Maple Grove. So I’ve been doing a little bit more than my wife and doctors would like. But I’ve committed to taking the months of December, January and February off.

Last year, Dakota County Mental Health Services asked me to speak at an event they organized at Hosanna! Church in Lakeville. It was standing-room only. As people were leaving, the organizers handed out these little sheets of paper that said, “A note for Ken.” 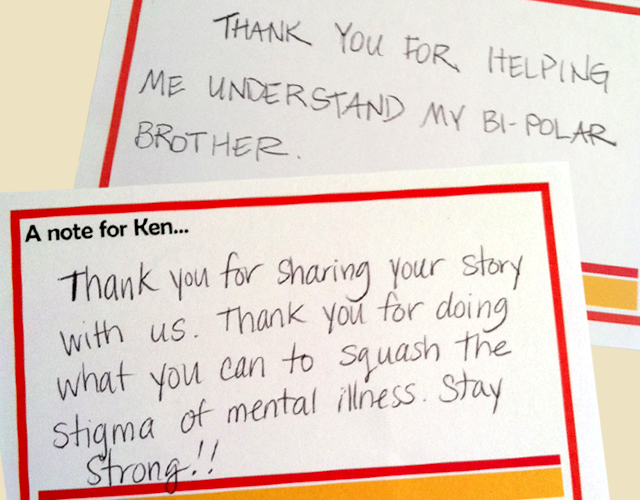 Courtesy of Ken Barlow
When Ken Barlow spoke about his experience with bipolar I disorder at a recent event held by Dakota County Mental Health Services, audience members wrote notes of support.

I didn’t know they were doing it, but after my talk, they collected the notes and put this book together. Two months later, they gave it to me. I opened it and I cried, because it’s so great. Any time I’m feeling down, I’ll open it up and read some of the notes. Just a couple of weeks ago I was feeling down, so I took out the book and I started reading it. It made me feel better.

At work, I’ve become the ad hoc guy for mental illness, so when I hear someone saying something about mental illness that just doesn’t sit well with me, like “commit suicide” instead of “death by suicide,” I’ll point it out. It sounds like a small thing, but people who have lost loved ones to suicide would say, “They didn’t commit to it. They did it. And it’s not a sin.”

Once I came out about my bipolar, I transitioned from being a person who didn’t even want one of his brothers to know about his diagnosis to being a person who talks to thousands of strangers about it. That’s a big leap. At these talks, I’m the Elvis of mental illness. It’s nice for a change not being known just for doing the weather on TV. It’s good to be known for doing something much more meaningful. I feed off of that. It makes me feel so good hearing, “Thank you.”

MinnPost: What do you do to stay healthy?

Barlow: Most people with bipolar disorder take a cocktail of medications. It’s very complicated because nobody’s the same. My cocktail is different from his or hers or my dad’s. If it were that easy, there’d be a magic pill for all of us. But there isn’t one.

Sometimes you go through these periods where you’re not feeling well so you call your doctor and he tweaks your meds. It’s very scary because you don’t know what will happen. It scares the crap out of me thinking that I could be stupidly manic again, or so depressed I can’t move. I’ve been both. I’m terrified, which keeps me on my meds.

Usually I get more manic than depressed. My wife and kids know what signs to look for because we’ve all talked about it. When I’m getting manic I don’t sleep right, I’m running around the house cleaning every room on my hands and knees. My wife knows the signs and she’ll tell me that something’s off. She can even tell by the sound of my footsteps across the floor. If I’m walking too fast, she knows I’m heading the wrong way.

Since bipolar disorder is hereditary, I’ve talked to all three of my kids about what my diagnosis means to them and what sort of symptoms they need to look out for in themselves.

MinnPost: What’s the biggest gift in all this for you?

Barlow: The biggest gift I received from this experience is empathy. I realize now that everybody’s got stuff. It just depends on what it is and how you handle it. The stuff you have makes you who you are. So bipolar is my stuff. Somebody else has heart disease. Somebody else has cancer. Someone’s marriage is falling apart.

We all have people we envy. Maybe to you a person with a yacht or a Mercedes or a giant mansion looks like they have it all. But you don’t know what goes on behind closed doors. The person you envy could have some kind of mental illness. They could be dealing with tragedy in their family. Somebody they love may have been killed in a car accident. We all envy other people, but you just don’t know what other stuff they are carrying around with them. It’s the stuff we carry around with us that makes us human. Nobody’s perfect on the inside.