Amy Holubar and Dawn Hunt live in a cozy house on Aldrich Avenue in North Minneapolis. Their neat front yard boasts a picket fence, a rainbow flag and a haughty, prowling cat.

For the first few years of their relationship, Holubar and Hunt shared the nearly 100-year-old house with Tyler, Hunt’s biological son. Though at times the small home felt crowded with three people, four dogs and the aforementioned cat, the space worked just fine for their family.

Then, a little over four years ago, the couple decided to become foster parents. In the years since, their family has grown from three to nine. In November, on National Adoption Day, Hunt and Holubar adopted four boys (two sibling pairs) — AJ, 4½; Levi, 4; Jack, 2½; and Zachary, 17 months. They are also fostering two infant girls, ages 15 months and 8 months, whom they will likely adopt sometime next year.

All six of Hunt and Holibar’s adopted or foster children have been diagnosed with different forms of mental illness or physical disabilities related to their birth mothers’ drug and alcohol use. At least one is on the autism spectrum, two have fetal alcohol syndrome, one is nonverbal and others suffer from seizure disorders.

Lois Nilson, program manager for Hennepin County’s foster care and adoption program, explained that most of the children they serve have some form of emotional or physical disability.

“All of our children, by nature of the fact that they have been removed from their homes, are victims of abuse and neglect,” she said. “The majority of our children have some sort of special needs coming from prenatal exposure to drugs and alcohol, exposure to violence, domestic abuse, chaotic homes.”

Before agreeing to become foster parents with the option to adopt, Hunt and Holibar knew that there was a high likelihood that the children in their care would have such disabilities. But that didn’t make it any easier when the babies’ deficits began appearing not long after their births.

‘It just broke my heart’

“Before I got involved with foster parenting, I didn’t realize that this kind of stuff happens — that people use drugs and alcohol when they are pregnant,” Hunt said. “People abuse their children. They neglect their children. I had a sheltered childhood. I didn’t see this kind of reality. I would say I was very naïve until this, and when I first saw one of these beautiful babies go through withdrawal, it just broke my heart.”

Nilson said that Hunt and Holibar are known around her office as a couple that is ideally suited to care for children in crisis.

“Amy and Dawn just love children,” she said. “They love to help them and care for them. They are not looking for anything in return other than to be that somebody who gets their kiddos through childhood and into adulthood. Foster parenting is tough: The type of personality that is best suited for this job is somebody who is not doing it to meet their own needs. They are doing it to meet the needs of the children.”

Holibar said that since she and Hunt decided to care for children in crisis, many people have told her just how much they admire what they do.

“We have people asking us all the time, ‘What can I do to help kids like this?’” Holubar said. “I say, ‘You know what? You can do what we do.’ A friend of mine said, ‘But you’re doing something that we’re not brave enough to do.’ I thought about that and I said, ‘I really don’t know if it is bravery, actually. It’s just love. All you have to do is take the first step and help a child. That’s all you have to do.”

On a sunny Sunday afternoon at the Holibar-Hunt house, the air buzzes with activity. Dark-haired babies toddle around the living room or play in the converted front-porch playroom, which also holds carrier kennels for the couple’s two toy dachshunds and one Shih Tzu. (The black lab sleeps in their oldest son’s bed.) Four folding high chairs fill the dining room, blocking the way to the tiny kitchen.

With six busy children under the age of 5 plus one preteen boy, the house is bursting at the seams. Hunt and Holibar have squeezed two cribs into their bedroom for the baby girls, and the two remaining rooms on the main floor hold two boys each. One of the bedrooms — a converted office — is just big enough for two cribs and no other furniture. Tyler, 12, has his own room on the second floor. “He calls it his man cave,” Holubar joked.

As Hunt and Holibar’s family has grown, the couple has decided that they need to expand their home so that everyone can live there comfortably. They’d also like to have the option to give even more children a safe and happy home. Earlier this year, they met with a Minneapolis contractor who drew up plans for a 32 x 32 one-story addition, which will expand the home’s kitchen and add a handicapped-accessible bathroom and four bedrooms and a nursery and play area. The estimated cost of the project, which would spread into the vacant lot next door, would be $120,000. 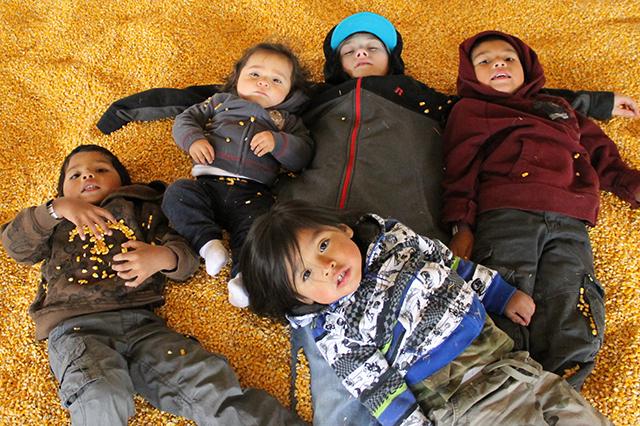 The next step toward making the project happen would be for the City of Minneapolis to accept Hunt and Holibar’s offer to buy the empty lot next door. Minneapolis City Council President Barb Johnson represents the city’s Fourth Ward, where the Hunt-Holibar home is located. Johnson said that even though Minneapolis has rules limiting the number of buildable lots allowed on one block, she hopes that the city will accept the couple’s offer.

“I really encouraged Amy and Dawn to think about going ahead with this plan,” Johnson said. “I want them to stay in the neighborhood. I want to make it happen so they can have a larger home and some more space for their kids. They’re really good neighbors.”

In the hope of gathering financial support for their project, Hunt and Holibar have launched a gofundme campaign where people can donate money toward the remodeling of their home. They hope to have the land purchased and funds raised in the spring, so that they can begin construction on a home large enough to accommodate their family.

“I’d love one day to be able to sit down at the dining room table with all of our children,” Holubar said, a broad smile spreading across her face. As it is, the dining room isn’t large enough to accommodate everyone in the family at the same time. “Not being able to sit together at the table for meals makes us feel fractured,” Holubar continued, kissing one of her son’s heads. “These kids need their family to be as solid as a rock.”