“I kept getting moved to different schools due to my behavior problems,” he recalled. Eventually, Perry was assigned to Monroe Community School, in St. Paul’s West Seventh neighborhood. There he was enrolled in the Amherst H. Wilder Foundation’s Kofi Services, a 25-year-old program designed to help African-American boys thrive in the public school system through culturally affirming support and guidance.

Back when the now-27-year-old Perry was in Kofi, the program paired African-American boys with African-American men who served as counselors and life guides. Perry’s mentor, LaRone Greer, became a central figure in his childhood, helping him navigate the school system.

“Back when I was getting in trouble in school, it seemed like nobody tried to figure out what was really going on with me,” Perry said. “LaRone took time to understand my life.”

Greer explained to teachers and other key adults that there was more to this boy than his difficult behavior.

“My mom was a single parent,” Perry explained. “My dad was in and out of my life and he brought a lot of drama to the house. LaRone coordinated with my dad and because of that every so often he would step up. Once my home life was under control, my life at school started to change.”

After he joined Kofi, the changes in Perry were significant. He met with Greer one-on-one weekly and once a week with a group of other Kofi kids and their mentors. Greer also worked with Perry’s mother to sign him up for extracurricular activities and academic assistance programs. When Perry joined Kofi, he was reading at a second-grade level and doing math at a first-grade level: By eighth-grade graduation he was on track with his peers.

“LaRone had a tremendous impact on my life,” Perry said. “He got me and my academics and behavior under control. He took time to see what’s going on in my life. He was a friend. He looked out for me and showed that he cared.”

Kofi has changed and expanded since the days when Greer was enrolled, but the program’s focus, impact and intention has remained the same, said Rudy Rousseau, L.P., Kofi program director.

“Kofi is the brainchild of a mix of very concerned, generous and brilliant folks, both African-American and non-African-American,” Rousseau said. He explained that Kofi’s founders had seen too many promising kids like Perry stuck in special education programs or shuttled in and out of different schools. Kofi’s founders believed that a lot of these boys were being misdiagnosed with behavioral problems because no one took the time to understand what was going on in their lives. Many were actually dealing with common mental health issues like anxiety and depression.

What Kofi’s founders felt these boys needed, Rousseau said, was someone who would listen to their stories and help them be heard. 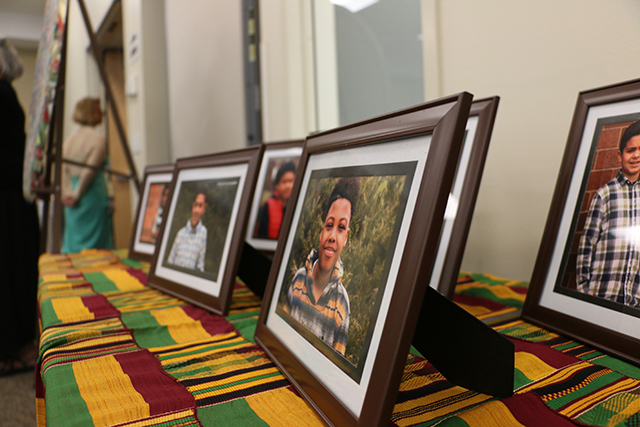 Courtesy of the Amherst H. Wilder Foundation
A collection of photos of Kofi students taken during a Kofi Services event.

From its beginnings as a counseling program focused on bolstering academic success, social skills and self-esteem, Kofi has evolved to replace the original counselor role with licensed mental health professionals who provide counseling services for Kofi kids and their families. The program, which was originally limited to elementary-age African-American boys, now provides services for African-American boys and girls in 10 St. Paul public elementary and middle schools.

Earlier this winter, in recognition of Kofi Services’ advocacy for the city’s African-American youth, the St. Paul City Council proclaimed Dec. 14, 2016, to be Kofi Services Day.

“I’m honored to say that this program has had an impact on many of our citizens,” Rousseau said. “We’ve affected over 2,000 St. Paul Public School students in our history. Multiply that times these children’s family members and you’ll easily count over 6,000 St. Paul residents.”

Many Kofi staff consider themselves to be connectors between children, their parents and the school system that directs their young lives, said Benita Amedee, PsyD., LPCC, a Kofi Services clinical supervisor based at St. Paul’s Crossroads Elementary.

Amedee said that a key component of her job is helping families feel comfortable with the idea of their children receiving mental health services. Many African-American families have limited experience with therapists and counselors, Amedee explained: It is important to help parents and other key family members understand that these services are there to help their children reach their full potential.

“At best, we’re only with these kids through middle school, which is a short amount of time,” Amedee said.  “We want to help them build this good feeling about school and about their own success in school. I would also selfishly like them come out of Kofi with a good feeling about therapy so that later in their lives they might think, ‘That wasn’t so bad. I might even want to go back to a therapist someday.’”

In the past, Amedee said, children served by Kofi might have been misdiagnosed with behavior disorders and assigned to corrective programs, so for some, the option of enrollment in yet another program might feel like a form of punishment.

“We try to correct the notion that Kofi is for ‘bad’ kids,” Amedee said.  “It’s not for bad kids. The kids I work with didn’t have the luxury of being diagnosed with ADHD. They have been considered by some teachers to be, excuse my language, ‘Bad-ass kids with bad parenting.’ But they aren’t.” 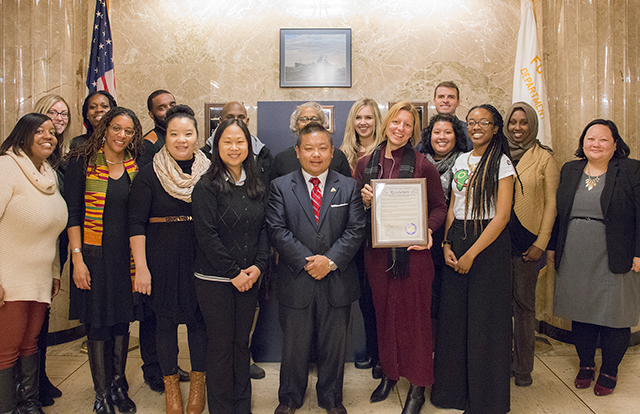 Courtesy of the Amherst H. Wilder Foundation
A picture of Kofi Services staff in City Hall after a city council meeting where Dec. 14, 2016, was declared Rudy Rousseau and Kofi Services Day in St. Paul.

“The lens that I was trained to see my clients through would have me, as many white clinicians do, render diagnoses of oppositional defiant disorder against a lot of black boys and girls,” Combs said. “Our predominant diagnoses at Kofi are anxiety disorders or PTSD, originating from the hurt that comes from living in chronically stressful situations or surviving the chronic stressors of anti-black racism in our world.”

Because Kofi therapists and their programs are based in individual schools, they become part of the fabric of the normal school day, Rousseau said.

“Our staff are so infused with the life of the schools that they are often confused with St. Paul Public School employees, but they’re not,” he said. “We are actually employees of Wilder.” But that confusion can be a good thing.

Amedee said that because she is based in a school, she is able to build strong, everyday connections with teaching staff, allowing her to advocate for her Kofi kids on many levels — and normalize the experience of mental healthcare.

“Not so long ago, the school district came up with the idea that every kid gets breakfast, because they started to realize that if a kid comes to school hungry they might not be learning so well,” Amedee said. “It’s the same thing with Kofi Services. I know what’s going on in the background. Sometimes I’ll meet with one of my kids’ teachers and say, ‘Right now this kid is homeless.’ And the teacher might say, ‘Oh. That’s what’s going on. That’s why he came in sad or cranky.’ This extra knowledge just makes room for understanding.”

‘They are a bridge’

For Perry, Greer was more than just a counselor. He was a central figure in his childhood that helped him make his way successfully into adulthood.

“LaRone kept in touch with me after I graduated from Monroe,” Perry said. “He helped me find jobs after school helping with the younger Kofi kids. And when I was on the football team in high school, he came to senior parent night with my mom. They both walked on the field together. It was nice having him there after all those years.”

After high school graduation, Greer kept in touch with Perry, encouraging him to finish a college degree after he’d served in the Army. And when Perry completed his degree in human services at Metropolitan State University, Greer was there to cheer him on once again.

“I promised LaRone that he’d see me graduate college one day,” Perry said, “and he did.”

Perry said that support like that has been key to his success and determination to succeed in life. Now he is back at school, completing a master’s degree in social work. When he’s finished, he said he’d like to help kids who are in the same situation he was in. He’s even scheduled to complete a social work internship at Kofi this coming fall.

“The people at Kofi take the time to understand what’s going on with the kids, to coordinate with the teachers and the parents. They are a bridge, and kids like me need a lot of bridges.”