The kids who live at People Serving People’s family shelter at 614 Third Street S. in Minneapolis can be a sensitive bunch.

“These children are highly attuned to their environment,” said Gwen Campbell, People Serving People development director. “They are sensitive to bright lights and sound, and they can be hyper-aware of their surroundings.”

Sensitivity is a symptom of trauma, Campbell explained.

“All of the children who live here have suffered trauma of one sort or another. We’re not only talking about the trauma of homelessness, but also other traumas that were part of the journey their families took to losing their homes. That could be abuse, incarceration, household dysfunction, mental illness, addiction. We are talking about kids who have experienced multiple traumas in their relatively short lifetimes.”

For years, there were two side-by-side activity rooms on the second floor of People Serving People’s building, where children grades K-5 who live at the shelter could meet with volunteer tutors, do their homework, read or just spend time with friends.

The two small rooms were useful, Campbell said, but they felt cramped and less than ideal, especially for the sensitive young people who used them.

The overhead lighting was harsh and fluorescent. The furniture was a jumbled mix of “nonprofit-style” furniture, Campbell said. The floors were cold, the chairs were hard and toys and supplies were stored in rickety hand-me-down cupboards.

“It definitely wasn’t horrible, but it wasn’t soothing, either,” she said. “It wasn’t a place that felt like it was made for the children who live here. It felt temporary, thrown together.”

Because the activity rooms were serviceable, upgrading them was a low priority for the shelter. “We figured the rooms would always stay that way,” Campbell said resignedly. But then, out of nowhere, People Serving People got a call from Jackie Millea, AIA ASID, founding partner of Minneapolis-based Shelter Architecture.

Millea, a member of the Minnesota Chapter of the American Society of Interior Designers (ASID-MN), was looking for a significant nonprofit renovation project that members of her association could take on to showcase their talents.

“I’d taken a tour of People Serving People before,” Millea explained. “I thought their mission was amazing. I thought that having the opportunity to work with my colleagues to create a comfortable, welcoming space there would also be amazing.”

Millea asked if there was an area in the shelter that staff felt really needed a design up-grade.

“They said, ‘What about helping us with these two classroom spaces?’” She recalled. “We took a look and said, ‘Perfect.’ ”

The ASID design team wanted to take on a project that they felt could demonstrate the power of design in enhancing the accessibility and use of a space. Making the activity room work better for the kids and adults who used it seemed like a perfect challenge.

The project began with conversations.

“The design team came here numerous times,” Campbell said. “They spoke with the coordinator who ran our programs for the K-5 group. That’s the group of children that take part in the activities that go on in those rooms. They learned more about we do in those rooms, what our mission is and the characteristics of the population we serve.” 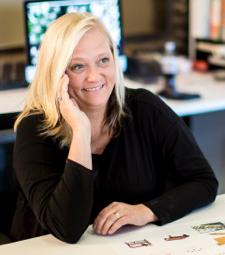 Millea and her colleagues learned about the challenges many of the children face and about the ways past traumas have impacted how they navigate their world. The design team — a group of professionals and students — met for a design charette where they worked in teams to develop four different plans for the space.

All plans incorporated trauma-informed design principles, Millea said, which include “realizing that the trauma exists, recognizing that people are affected by their traumas, responding in ways that are calming and don’t create more trauma, and actively working to create a safe space where the trauma is understood and not exacerbated.”

Because People Serving People is a homeless shelter, Millea said that the design team understood it was important to build a space that acknowledged the temporary nature of the children’s time there but also encouraged a sense of stability.

“We wanted to create a space that provided physical and emotional safety,” she said. “We wanted the kids to feel like it was their space and no one else’s. We wanted to make clear it was a kids’ space, not an adult space and not a baby space, either. It had to be a space that was created just for this particular group of kids.”

The four charette-born ideas were narrowed to two, and the two finalists were presented to People Serving People.

Staff at the shelter were impressed with both designs, but finally settled on one that offered the option of turning the two rooms into one with the help of a sliding barn door. One problem that came up in meetings was that the rooms often felt crowded and hard to fit all the children and their tutors at one time. The option of sliding open the door and turning two rooms into one solved that problem — while still retaining the flexibility of having two separate rooms when needed.

“The piece that was really impressive about this design was that through their conversations with us and their visits to our shelter, the ASID team really did learn about trauma-informed care and what design principles would support the way we deliver our services,” Campbell said. “Their finished design was very intentional. We felt like it was just what we needed.”

Because the outdoors can have a calming, nurturing effect, the ASID-MN design team worked to create a space that referenced the natural world, Millea said.

“We tried to use neutral colors, to not use bright colors that can be overstimulating. We looked to nature to really bring in the calming sense of wellness that humans often find in outdoors.”

The rooms are on the building’s second floor with no direct outdoor access, so the design team brought natural elements inside by creating a woodland mural and covering the floor of one room with a custom mix of linoleum tiles that look like grass and water.

“We also tried to bring in natural wood colors wherever we could,” Millea said.

The floor of the second room is covered with soft carpeting. The overhead fluorescent lighting was replaced with high-quality LEDs. Custom-crafted acoustic tiles that resemble clouds float below. 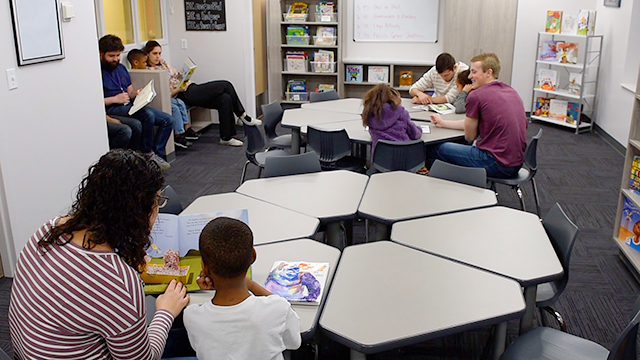 Matching, movable furnishings have been selected for both rooms.  “The new tables and chairs can be put together in small groups or taken apart individually so kids can have quiet space or meet in a larger groups,” Campbell said. “They also have some sofa seating built into the walls so a child can sit comfortably with a reading tutor or with a friend.”

The fact that the furniture can be moved to suit the way it will be used at a particular time, Campbell explained, “allows for the children to have more control over their environment and what they do in it. This option is incredibly important for kids who have survived trauma.”

Millea and her colleagues estimate that project costs topped $90,000.  Time, materials and labor were donated by team designers, product suppliers and installers.

“It was just this incredible outpouring of generosity,” Millea said. “I am overwhelmed and grateful and impressed with our ASID community and how generous people were with their time and their money and their products.”

The project took several months to complete. About six weeks ago, the rooms were opened for use. They haven’t been empty since.

“The children are happily exploring every corner and claiming it for themselves,” Campbell said. “These are kids who don’t have a lot of control in their everyday life, so they love being able to feel like this is their space. They are really moving in and making it their own.”

Millea is beyond pleased with how the project turned out.

“It has just been wonderful,” she said. “My heart is like the Grinch’s heart: It’s grown several sizes and is bursting out of my chest. I’m so excited. It was a wonderful opportunity to illustrate how design can change people’s lives. I’m glad I was able to be part of it.”

Rooms of their own: Trauma-informed design improves children’s space at People Serving People