Jeanne Calvit describes the beginning of her decades-long career creating art by and for people with disabilities as a “total fluke,” but it didn’t take long for the work to become a passion.

As founder, artistic and executive director of Interact Center for Visual and Performing Arts, Calvit leads a 21-year-old nonprofit dedicated to challenging perceptions of disability through art.

She’s known that she wanted a career in theater since she was a young adult, but Calvit always imagined that she’d work in a company with nondisabled actors.

Then her life took a shift. Calvit had been active in the Twin Cities theater community for several years when a friend asked if she’d be willing to lead a new theater program at a summer camp for people with developmental disabilities.

“I had zero experience working with people with disabilities,” Calvit said. But she was intrigued by the opportunity — and hungry for the work. She and her then-business partner wrote a grant for the theater program and got it funded. After staging three shows over three weeks with a company of enthusiastic actors with developmental disabilities, she was hooked.

Calvit loved the sense of freedom that disabled actors brought to their work. And, perhaps because she had no formal experience in the disability community, her definitions of the meaning of disability — and ability, for that matter — were wide open.

“I often say that because I didn’t have any background I didn’t have any preconceived ideas about what artists could and couldn’t do,” Calvit said. “If we were going to put on a show, I never thought, ‘We aren’t going to attempt this because our actors might not be able to do this.’ ”

Working in collaboration with disabled artists quickly became central to Calvit’s definition of art. For a few years, she recalled, “I kept doing theater with nondisabled actors, but then this work became a passion. I realized that there were already plenty of people who are out there directing ‘normal’ actors and putting out ‘normal’ shows. I realized that I was the only one out there at the time who was doing something that was not just theater for theater’s stake. It was something bigger. It was changing people’s lives.”

In 1996, Calvit turned her passion to change lives into a career when she founded Interact. Today, the St. Paul-based organization is recognized worldwide for creating high-quality art and theater with a spirit of radical inclusion. Widely popular Interact shows like “Bubba Nielson Endangered Species” and “Madame Majesta’s Miracle Medicine Show” have earned the organization broad acclaim.

Recently Calvit was honored for her work when AARP Minnesota and Pollen Midwest selected her as one of their “50 Over 50” honorees, a group of influential Minnesotans over 50 who break down myths about aging with a commitment to their causes, their art and their communities. Calvit and the other 49 awardees will be honored at a luncheon on Tuesday, Oct. 17, at Minneapolis Institute of Art. 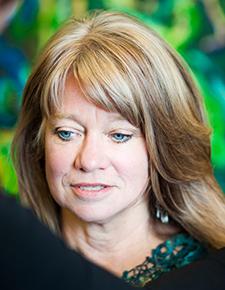 Interact Center for the Visual and Performing Arts
Jeanne Calvit

Seth Boffeli, communications director for AARP Minnesota, said that Calvit’s clear commitment to art and empowering the people who create it set her apart from the competition.

“I think what puts people to the top of our list is the impact that they have on the community,” Boffeli said. “Some of the people who were nominated for this award are great artists, but the folks who really rose to the top are people who are connecting their work with their personal passion to create something even bigger than themselves. In Jeanne’s case it is connecting people with disabilities to a great life-fulfilling passion.”

Because she finds passion and meaning in her work, Calvit, 65, sees no reason to even start thinking about retirement.

“Artists don’t retire,” she said with a laugh. “Picasso didn’t retire. Look at Maggie Smith. Nobody asks her to retire. People in the arts don’t usually retire unless they have to. You do art because you love it. It’s not just a job.”

Because she sees her work at Interact as more than just a job, Calvit said, “I don’t have the attitude: ‘I’m 65. I’m going to quit working and do all the things I’ve been wanting to do all my life.’ I’ve been able to do all those things while I’m working. Most of the people on the 50 Over 50 list probably feel the same way that I do.”

From the beginning, Calvit has embraced a broad definition of disability.

Calvit said she believes that people with mental illness, just like artists and actors with developmental disabilities, take an open and innovative approach to their art.

“People with mental illness are super talented,” she said. “They come at their art from a different perspective, with fewer limitations.”

Because it is an organization created with disability rights and access in mind, Interact has become home for many talented artists who struggle to find their place in the traditional arts community, Calvit said.

“We have a guy in our theater program. He was a professional actor in the local theater scene, but because of his anxiety disorder, he found he could no longer compete with other actors. At Interact we deal with the anxiety and work through it. He is now one of our leaders.” 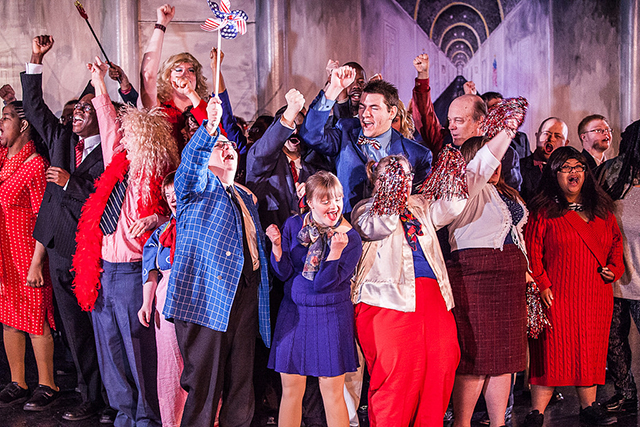 Photo by Tom Sandelands
Another image from “Hell Is Empty and All the Devils Are Here” by Interact.

The community at Interact understands that sometimes people with disabilities need extra support to create their art, Calvit said. The same understanding that exists for people who need help to work around their physical and developmental disabilities also extends to those with mental illness.

“It has been an amazing journey watching people flourish doing theater and doing visual arts here,” Calvit said. “You have a support group if you’re having a bad patch with your mental health. We’re not going to kick you out. We’re going to work with you.”

Interact staff encourages funders, audiences and participants to expand their definition of what it means to be disabled, so they hope that the individuals who participate in their programs will also eventually learn to expand the way they define themselves.

“People’s disability can become their singular identity, but when they come to Interact and participate in our programs it changes. After working with us, their identity changes. It is now, ‘I’m an artist,’ not, ‘I’m disabled.’ Disability is no longer their only identity. Art is fulfilling for everyone. If you are using your full potential, if you are expanding your creativity, you are going to be happier, and you are going to expand your idea of what you can achieve in your life.”

Interact founder sees disability as a launchpad for artistic expression