The way the world usually works, certain people, by virtue of birth or good fortune, are in charge — and other people are expected to take orders.

In “Feast of Fools,” a new play created by Interact Center for Visual and Performing Arts, the roles are reversed, with a group of the lowly — court jesters, village clowns and other “fools” — taking the lead, while those who are used to calling the shots having to step aside.

The story of “Feast of Fools” has its roots in medieval history, explained Jeffrey Haas and Ana Koutsostamatis, two Interact cast members who play the lead roles of the Abbot and Vadoma, a mystical Manouche, or Romani: “Feast of Fools was this festival that was celebrated once a year where the peasants and the royalty would flip-flop and switch places,” Haas said. “It was kind of a topsy-turvy day.”

Creating a play based on this topsy-turvy switchup was appealing to the cast and crew at Interact, a theater that works to challenge perceptions of disability by staging plays that include roles created by and for people with a range of physical, emotional and developmental disabilities, everything from Down syndrome to autism to mental illness.

In the time when “Feast of Fools” is set, people who were different were at the bottom rung of society. It’s still not that different today. The idea of creating a play around a day where underdogs rule was rife with possibility, said Haas, who has been diagnosed with obsessive-compulsive anxiety disorder and borderline personality disorder, disabilities that threatened to sideline his acting career: “There were so many roads we could go down. It was hard to know where to start.”

As with all original Interact productions, the cast and crew of “Feast of Fools” began with an idea, and then met for several weeks to research and craft the play and the score.

“Jeanne [Calvit], our artistic director, had the vision for the play, as she usually does for all the shows,” Haas said. “And so we started with the idea of the historic Feast of Fools and researched what it actually was and what it meant. Then we took it from there.” 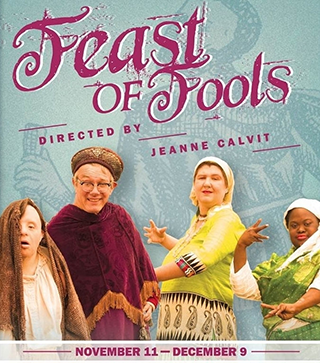 The creation process involves all cast and crew members, no matter their disability.  Koutsostamatis, who has schizoaffective disorder, said that the scriptwriting process is usually an organic, group affair.

This isn’t the first time that Kling, who was born with a congenital physical defect and later was further disabled in a motorcycle accident when he suffered a brachial plexus injury that limits the use of his arms, has worked with Interact. Last year, he starred in another original production, “What Fools These Mortals Be.”

“It’s great having Kevin be a part of the work,” Haas said. “He brings so much to the production.”

Kling isn’t the only Interact cast member with past theatrical experience. Haas has been acting professionally since he was 9 years old. He joined Interact eight years ago, on the advice of his social worker.

At first, it felt strange to be working with a cast made up of people with a variety of disabilities, Haas said.

“It was a different experience coming here because the other theater experience I had was working in theaters that employed just ‘regular’ actors,” he said. Though he self-identified as a person with a mental illness, Haas didn’t think of himself as being disabled, in the traditional sense at least. 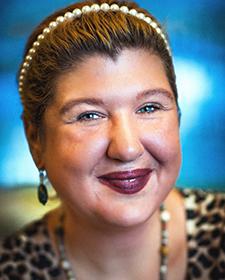 “I wasn’t aware of what it would be like to work with people with autism or people with Down syndrome,” he said. “But after working all these years with Interact, my perspective has changed. Now I’m kind of blind to those kinds of disabilities. I just see everyone as the same as everyone else.”

Koutsostamatis’ professional theater experience began when she worked as a historic re-enactor in her teens. She said she believes that Interact’s casts gain strength from their actors’ wide range of backgrounds.

“Some people here are old pros like Jeff. We have other people who have also been in theater their whole lives. And then we have people that have no acting experience at all.”

And the ranges of disabilities among the cast and crew? Does that affect the quality of the performances?

“It is interesting how people relate to one another,” Koutsostamatis said. “It really goes really well, actually. With all of our different backgrounds, working together to create a play develops patience and relationship skills. It actually is a positive thing — and it actually makes our plays,” like “Feast of Fools, which makes complex connections between the past and current events, “even better, so much more complex.”

‘It just has this vibe’

Mental illness is an invisible disability, and because usually they are able to pass through the world as “normal,” it took Koutsostamatis and Haas a bit of time to think of themselves as disabled in a strictly traditional sense.

But spending time with Interact cast members has shown them that everyone has something that holds them back in one way or another: We’re just not all comfortable owing up to that reality.

Koutsostamatis has been involved with Interact for 18 years. She first learned about the organization from her acupuncturist — “she knew I had an artistic flair,” Koutsostamatis recalled — and from the moment she walked in the door, she felt at home.

“Interact is definitely my cup of tea,” Koutsostamatis said. “It was the perfect thing for me. I fit in right away. I was able to do the shows and I was able to just fit in. It just has this vibe. It feels very right for me.”

Any reservations Koutsostamatis  might have felt about the professionalism of Interact productions was quickly erased after she saw her first performance. 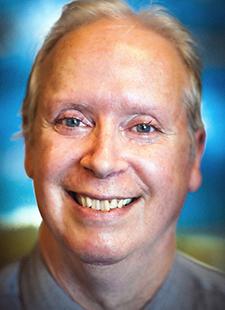 “I was very impressed,” she said. “Everyone was so professional. It wasn’t amateur. These were professional artists.”

Haas said that his work at Interact has made him aware of the bias that exists against people with developmental disabilities.

“I get impatient with people out in the world who don’t know anything about people with Down syndrome or autism,” he said. “I catch myself being intolerant of those kinds of attitudes. I think, ‘What do you mean you don’t understand?’ I’m so used to it now that I just forget that they don’t have the same experience as I do.”

A career in the arts

Many of the Interact artists, including Koutsostamatis and Haas, live on Social Security disability benefits. Because of that they are able to spend much of their days at the organization’s bright, open workshop, rehearsal and office space at 1860 Minnehaha Avenue West in St. Paul.

“This place isn’t just a workplace,” Koutsostamatis said, during a break in rehearsals for “Feast of Fools.” “It is also a place for healing. … We’re a day program as well as a career.”

Haas said he takes his work with Interact seriously. It is his job. He spends three full days a week there, more when plays are in full production.

“I would go crazy if I didn’t have some place to go to,” Haas said. “Some people who live where I live don’t work at all. I think, ‘How do they fill their days?’ I think I’d go mad if I just sat around. Performing is my God-given mission in life. I have the natural abilities. I was given these gifts and so I need to use them.”

For Koutsostamatis, acting is work — and therapy.

“It’s definitely been healing for me,” she said. “This has been a very good place to be involved with. I’m very proud to be part of Interact. It’s been very positive for me. I’m definitely a better person because of it.”

In creating the new play ‘Feast of Fools,’ actors see disability as a creative advantage