Remember middle school, when hormones took control, changing your body overnight? Those same hormones can also have a kind of shape-shifting power in the pubescent brain, turning even the most sweet-tempered kid into a surly preteen in the blink of an eye.

Such rapid-fire personality changes catch kids and their parents off guard, creating disturbing discord in even the most loving of families. As a middle-school teacher, Katie Thune had firsthand experience with the hormone-ravaged masses: She watched as kids in her classes bounced off the walls — and listened as their parents tried to understand their changed behavior.

“When I was teaching, I was surrounded by all of these crazy, wild hormones,” Thune said. “Kids were struggling. Parents were struggling. I saw the whole shebang. I knew there needed to be a way to get things back into balance. Families have such busy lives, and to top it off, kids’ brains are out of control. I wanted to find a way to help everyone keep the peace.”

Thune, a certified Yoga Calm instructor, was so interested in helping families find a peaceful path that she took a leave from teaching five years ago to develop and launch Mad Hatter Wellness and The Power of Me, a series of classes and workshops for middle-school girls.

Later, she expanded her programming to include moms.

“Moms started reaching out to me after their daughter attended The Power of Me,” Thune said. “They’d tell me that they were struggling to connect with their daughter. They’d say, ‘Have you ever considered letting a mother participate in one of your classes or workshops?’ I thought, ‘Why not?’ It seemed like a perfect opportunity to bring mothers and their middle-school daughters together.”

The resulting workshops included partner yoga, group discussions about development and communication — and times for the moms and daughters to split up and talk in separate groups.

The separated time is as important as the together time in the workshops, Thune said. It’s an opportunity for adults and children to talk about each other without fear of being judged.

Hormonally influenced behavior shifts can feel be extreme, and sometimes parents don’t know how to react. “Parents tell me, ‘It is scary when all of the sudden my sweet little kid is not a kid anymore,’ ” Thune said. “They’ve got a bad attitude. They are constantly talking back.”

Thune tells participants that adolescence isn’t an easy time for anyone.

“For the majority of kids, these shifts happen around age 9, 10,11, 12,” she said. “It’s like this switch goes off in their brain and they get moody and sassy. They don’t smile nearly as much.  The fourth- and fifth-graders who come into my workshops generally smile. The sixth- and seventh-graders, nobody is laughing or smiling.  The parents are all wondering, ‘Where did my sweet kid go?’ They feel confused — and a little sad.”

This confusion and misunderstanding goes both ways.

“I have had girls come to me and say things like, ‘My mom thinks I’m bipolar,’ ” Thune said. “At the workshop, I talk about how personalities can really change at this developmental stage. We talk about how going through puberty feels like a ride on an extreme roller coaster, and that can be scary for everyone.”

She makes a point of reassuring workshop attendees — both adult and adolescent — that this developmental phase doesn’t last forever: “The good news is that for most of us it is going to pass. Some people have more lasting mental health issues that pop up at this time, but for the vast majority of young people these changes will eventually end.”

Revamped workshops now open to everyone

In the years since she launched The Power of Me, interest in the program has grown by word of mouth. “We don’t do any advertising,” Thune said. “People just tell their friends or their neighbors. Sometimes they mention it on Facebook.” 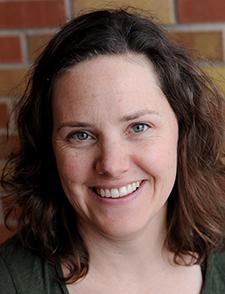 Recently, Thune decided to change the program. In response to a growing number of requests from families, she opened The Power of Me to kids of all gender identities and their significant adults.

“At first we changed the retreat to ‘parent-child,’ ” Thune said. “We wanted to be more inclusive so more people could take part. Then we opened it to kids and their significant adult figures — moms, dads, aunts, uncles, guardians.”

The original mother-daughter workshops lasted for four hours. Thune said she was starting to see that the length was a barrier for some busy families, so she cut it back to two power-packed hours. During the retreat, participants will work on improving communication, practice partner yoga and find time for kids to talk to their adult about something that’s been bugging them. The adult’s role? To listen.

Being a listener rather than an adviser can be tough, Thune said: “Parents always want to fix things for their kids,” she said. “When you see your child unhappy, upset or out of control, you want to make it stop. But kids are going through hormonal changes at this age, and some of that is inevitable. I tell adults that I understand that they want to make it better. We all do. Mindful listening is one way to do that.”

“We always spend a lot of time talking about the changes that are going on in the adolescent brain at this stage of development,” Thune said. “This discussion is eye opening for both parents and kids.”

While there is plenty of explanation about the disruptive power of hormones and the way they can impact adolescent behavior, Thune also added her workshops don’t give kids a free pass: “We make a point of saying that these changes are not an excuse for unhealthy behavior,” she said. “But having a deeper understanding of what’s going on in a young person’s body and brain helps parents understand why their kid can be so weird or out of control. It also help the kids understand why they are feeling the way they do.”

At the end of the workshop, Thune provides attendees with a list of practical tools and tips for listening and talking to each other, like introducing significant conversations during car rides. (“Because you aren’t looking directly at each other, sometimes people feel like they can really open up,” she explained.) They also get a pack of “conversation-starter” cards that families can use to dig into important subjects.

While some of Power of Me advice may seem instinctual, having it spelled out feels powerful — and just spending time together focusing on an important relationship helps kids and adults build deeper connections.

“A lot of our participants tell me that they feel closer and better able to talk to each other after attending our workshops,” Thune said. “A lot of what we’re talking about is basic stuff, but sometimes you need to hear it from someone else. When families come together, when they listen and show they care, it’s a really beautiful thing.”

On March 18, from 2 p.m. to 4 p.m., Thune will be offering a new Power of Me retreat for kids between fourth and eighth grade and their significant adults at St. Timothy Lutheran Church, 1465 Victoria St. North, St. Paul. There is still space for participants. Registration is available online.

Workshops help middle schoolers and their significant adults understand each other