At Andrew Residence in Minneapolis, the Voices Heard Choir practices every Wednesday evening at 7 p.m. The choir sets up in a corner of residence’s large dining room, in front of a slightly tinny baby grand.

Not long after dinner dishes are cleared and tables wiped, choir co-directors Melissa Wenszell and Hilary Fredenberg, board certified music therapists from MacPhail Center for Music, set up three rows of chairs, and hook up a laptop to project lyrics on a large screen. Jonathan Walters, Andrew Residence living skills coordinator, is also there, guitar in hand.

As the clock ticks toward 7, choir members, all residents at Andrew, a residential treatment and long-term care program for adults with serious and persistent mental illness, begin to arrive. They wander in, selecting seats near the piano. By start time, 10 singers are seated and ready for practice; later, four others trickle in one by one and join. Some singers sit right up front, eager to begin. Others sit further back. One wears noise-canceling headphones that he slips off quietly when the piano begins to play.

If you’ve ever been part of a choir, what happens next is pretty typical: Practice starts with warm-ups, breathing exercises and scales. Then things veer from the traditional rehearsal format: Choir members suggest songs they’d like to sing, tunes they remember from their past or songs with lyrics that speak to their specific moods, and the directors pull up the songs from YouTube and project the lyrics. Together, mostly in unison, but with some simple harmonizing, everyone enthusiastically sings together.

Quickly it becomes clear that for its members, the Voices Heard Choir is about more than simply making melody.

“Music can be used for self-expression, for tension release,” Fredenburg said. “We’ve found out that many people, even those who haven’t been in a choir, can get a clear benefit from music. At Andrew Residence, we learned that we have this whole wide spectrum of people who may not have formal singing experience but are clearly interested in doing something musical together. With this choir, we are trying to build a space where Andrew residents can create something that they feel tells their unique story.”

A choir is born

Voices Heard Choir began a little over two years ago when staff at Andrew partnered with MacPhail to bring Wenszell and Fredenburg to lead music programming for interested residents.

“At the beginning, one of the goals that Andrew Residence staff told us they had was finding ways to use music to increase participation and social skills for residents,” Fredenburg said. “They wanted to get residents to come out and try things they hadn’t tried before.”

“Looking at the literature, there is a lot of information on the benefits of music therapy for mental health in single sessions or single doses, but not on the benefit of long-term musical relationships,” she explained. “With this program, we wanted to create something lasting that was music-making within a community.” 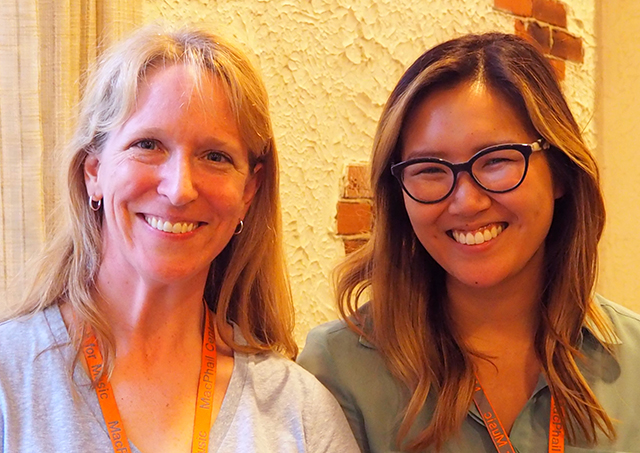 After speaking with residents at Andrew, Wenszell learned that many were interested in an opportunity to sing together in a group and maybe even in performing for others. To Wenszell, that sounded like a choir, so she sought funding for the project. The group was eventually awarded a grant from Aroha Philanthropies, and in January 2016 the choir was born.

This new singing group needed a name. Many of the choir’s members have schizophrenia and regularly experience auditory hallucinations. The name they selected was a nod to that reality — with a clear acknowledgment of the group’s larger mission.

“The choir members chose their own name,” Wenszell said. “They picked Voices Heard because it is a pun on the expression ‘hearing voices,’ but they also liked the name because it explains how they want their audiences to hear what they have to say. They want to use their music to deliver a message.”

It didn’t take long for Voices Heard Choir to catch on at Andrew Residence. The group began with seven or eight regular members, but steadily grew to about 15 consistent singers, Fredenburg said:  “They’ve been coming regularly for the past two and a half years, which is incredible for Andrew residents.”

Living with a serious and persistent mental illness like schizophrenia can make it hard to keep a consistent schedule or join a group  (“It’s important to let people participate on their own,” Wenszell said. “Some people have good and bad days.”), but the choir has a loyal and dedicated membership.

“Voices Heard is the highest and most consistently attended group at Andrew Residence,” Wenszell said. “From Day 1, we’ve had great response and participation. There are people who participate in the choir that don’t participate in anything else at Andrew.”

Living with a constant chatter of interior voices can be a source of significant stress. Some people with uncontrolled schizophrenia let the voices turn their attention inward. This inward focus can mean that a person has little daily meaningful contact with others. Isolation like this can be toxic.

Some people, including members of Voices Heard Choir, say that they find their auditory hallucinations are quieted when they sing.

“When the auditory system is engaged, it immediately engages the entire brain,” Fredenburg said. “It almost blocks the voices for a second, so a person doesn’t have to focus on them. Many times people tell us that music is a good form of engagement to redirect their attention.”

Fredenburg explained that brain engagement is created by the power that music has to reach regions that have stood dormant for years. 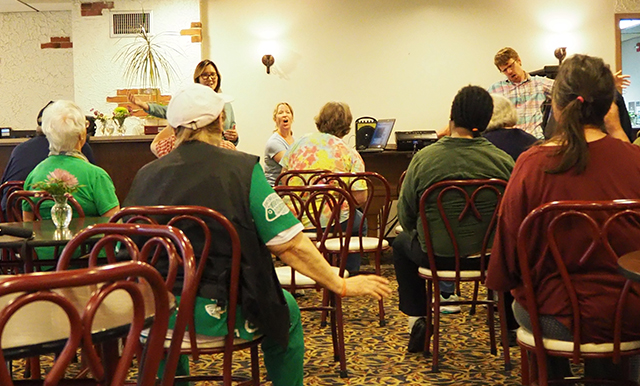 She recently attended a neurologic music therapy training, where she watched videos that showed how a brain reacts to auditory stimuli. “They scanned the brains of people when they were listening to or performing music,” Fredenburg said. “All of these areas for the brain light up. When a person talks, it is processed in one area of the brain, but music reaches so many more areas.”

This is true with other conditions that cause brain atrophy, including strokes, Alzheimer’s disease or dementia, Fredenburg added. “People with those conditions are often are still able to sing or produce some sort of vocalization when they cannot speak or remember, because different parts of the brain are stimulated by music.”

The brain’s singular focus on the music it is creating is freeing for people like the members of the Voices Heard Choir, people whose minds are usually crammed with constant interior chatter. Singing together, though it creates a loud noise, actually creates a restful feeling of quiet and focus inside the brain of the singer.

“Music provides this in-the-moment auditory stimulus which helps activate a different part of the brain and allows the singer to engage in the moment,” Fredenburg said. “For many people like the members of this choir, it’s a great gift.  Music allows the brain to focus on the right now.”

The song’s lyrics are projected on the screen, and Melissa plays piano while Jonathan strums his guitar.

For the first 10 minutes, the singers are also accompanied by the sounds of the dining room being cleaned up. A vacuum hums as choir member Jeff asks, “What does kumbaya mean? What language is that?”

The next song is “Under the Boardwalk.” The choir has sung this before, even performed it at concerts, so they easily divide up into parts, with men singing the “Under the Boardwalk” parts of chorus, and the women answering “Out of the sun,” etc. [Listen here]

The song’s lyrics somehow feel fitting, and choir members appear to settle in and relax as they sing them.

“Often choir members will share their favorite music. Most weeks, people will bring songs for us to sing during rehearsal. We’ll also pick theme nights, so they can prepare. One favorite theme is ‘Motown Meets Broadway.’” The songs bring back memories, Fredenburg explained: “Choir members will say, ‘I love this song,’ or ‘I forgot about this song.’ They’ll say, ‘This song means a lot to me.’ They’ll sit and reflect. Songs bring up a lot of memories. They’ll laugh and giggle about them.”

Other songs Voices Heard practiced last week included “Summer in the City,” the theme from the movie “Fame” and “The Hills Are Alive” from “The Sound of Music.”

“Channel your best Julie Andrews,” Wenszell said, encouraging the singers to let the music flow. The choir also sang a haunting rendition of “Over the Rainbow.”

“That would be a great show-stopper ending for our next concert,” Wenszell said.

Performance is an important part of the Voices Heard experience. The group regularly sings for other residents at Andrew, and it also performs at Augustana Care Center just down the street.

“We do many performances every year,” Wenszell said. “We try to do one per season, and some other mixes in there, too.”

Choir members select their performance repertoire. “They select the songs they prefer and want to sing,” Wenzell said. “We pull things together thematically as music therapists.”

The songs vary, from recent hits to classics to original renditions.

“We’ve taken popular songs and changed the words,” Wenszell said. “Choir members have rewritten the words to the songs and gotten the permission of other choir members to sing it their way. The new words speak to the participants’ lives and make a message they want to share with their audience. This choir really likes to bring their music to other people.”

While the Andrew Residence and Augustana performances lean toward the causal, Voices Heard Choir has also taken the main stage at MacPhail, performing for an enthusiastic group of friends, relatives and other supporters.

“It’s a formal setting,” Wenszell said. “They are accompanied by a Steinway grand piano. It gets them out of their comfort level. It’s a really big deal for some folks.”

At concerts, Voices Heard Choir members don MacPhail T-shirts, which they earned after coming consistently to practice every week for a month.

“We explained that the shirts could be a way that they can look like a real choir when they perform,” Wenszell said. Attendance soon became a sign of dedication: When some members missed a practice, others ratted them out, saying they shouldn’t get their shirt until they’d improved their attendance. “It’s a big deal to them,” Wenszell said. “They want to be professional.”

That desire for professionalism, for taking the music seriously, is reflected in the weekly practices. There’s a casual air about them, but they are clearly important to members.

“There is that joy that comes out every week,” Wenszell said. “We don’t turn anyone away, but we do things consistently. That’s important. We do warm-ups, follow a pattern in our practices. We’ve done some songs with parts and harmony but not a lot. It’s all about making music together, about how we do that as a community. The experience elevates their mood. It’s not about how perfect you can make this Bach cantata or how exact your pitch is. It’s about the joy of singing together, and of singing for others.”

With the Voices Heard Choir, singers with serious mental illness tell their story