Sept. 15, 2020
Jeff Zuckerman and his wife, Leah, had been married for 30 years when Leah’s late-onset bipolar disorder upended their ordinary, happy lives.

Leah, a physically healthy former social worker and public health professional, volunteer and mother of two grown children, had experienced a few bouts of manageable seasonal depression over the years, but it didn’t prepare Zuckerman for the serious illness that abruptly took over his wife’s brain and body during the spring of 2015.

Just as their daughter was celebrating her engagement, Leah began an inexorable slide into mania. Usually a funny, smart, even-tempered woman, she became uncharacteristically testy and angry. She wasn’t sleeping well, and she was increasingly taking out her frustrations on her husband. The couple’s Minneapolis home, once a happy place where they had raised their daughter and son, became the site of late-night arguments and emotional turmoil as Leah lost control of her brain.

This personality flip, Zuckerman said, “felt like it came out of nowhere.” He tried chalking some of it up to stress and life changes, but as Leah’s mania intensified, causing her to wage shouting matches; abruptly change travel plans; and send strings of rambling, confusing emails, he knew something was seriously wrong.

Eventually, after months of struggle, Leah was diagnosed with late-onset bipolar disorder. Zuckerman, who had little experience with serious mental illness, worked to come to terms with this new reality.

“I was 60 years old,” he said. “I had some experience with an uncle who had schizophrenia, but other than that, I didn’t really know much about mental illness.”

The majority of bipolar diagnoses usually occur in late adolescence or early adulthood; the fact Leah’s bipolar disorder hit when she was in her late 50s, Zuckerman said, “added to the shock of everything. It’s unusual, but not unheard of. While 20 percent of the general public will be diagnosed with a mental illness during their lifetime, only 10 percent of cases of bipolar occur after the age of 50.”

At first, Zuckerman was too shocked by his wife’s change to do anything but keep his head above water. Eventually, though, he began filling a series of journals and keeping copies of Leah’s disturbing emails and text messages. A writer and editor by trade, Zuckerman felt that it was important to document his experiences. He’d looked for books that could offer support and solace for spouses of people struggling with mental illness, but there were few options to choose from.

“One book, ‘My Lovely Wife is in a Psych Ward: A Memoir’ by Mark Lukach, is a good read, but it focused on the author’s wife’s experience,” Zuckerman said. “I really wanted to hear his story.” He wanted to read the story of someone who’d lived through what he was experiencing, a book that offered solace, understanding — and even a little humor.

“There really wasn’t anything out there for people in my situation,” Zuckerman said. So, a few years into Leah’s journey with mental illness, he decided to write a book that told a spouse’s story. The finished book, titled “Unglued: A Bipolar Love Story,” was published this summer.

During the tumultuous first months of Leah’s struggle and the contagion of her ensuing depression, Zuckerman joined a NAMI-Minnesota support group for family members of people with mental illness. The group became a lifeline, a place where he met other people who’d faced similar struggles.

“I was trying to process all I had experienced,” he said. “I had been attending the support group for probably three years when I first started writing the book.” After getting to know more people with similar stories, he said, “I realized that the kinds of things I had lived through were a relatively  common experience that’s not talked about very often. I felt like I had a story to share that would be valuable to other people.”

And he had plenty of material to draw from: “I had four complete journals that I had been writing. I’d been taking notes for years.”

It didn’t take long for Zuckerman to realize that one of the biggest hurdles he and Leah would face going forward with her new diagnosis was the discrimination and stigma associated with mental illness.

The first step Zuckerman took was confiding in friends. He has a large group of friends and extended family, and not long after Leah’s official diagnosis, he began talking to a few of them about their struggle.

Living with an ailing loved one can be hard on a caregiver’s physical and mental health. Over time, Zuckerman said he learned to take care of himself. When he wasn’t talking to friends, he sought support from his religious community: “Even that felt a little strange because you are telling the world, ‘This is going on in my life.’ There is so much stigma.”

If Leah had been diagnosed with cancer, Zuckerman said, he’d never have paused before telling friends, family and neighbors about her illness. But because her struggle was with bipolar disorder, his first inclination was to keep it quiet. And in the beginning, Leah also urged him to keep her condition hidden.

“You don’t talk about mental illness in the same way as you do an illness like cancer,” Zuckerman said. “You don’t always let the neighbors know what what’s going on, especially when a spouse is manic, part of the illness is saying, ‘I don’t want anybody to know.’”

Once he started opening up about the truth, Zuckerman said, good things began to happen.

“Some five years into my wife’s illness, the importance of being open is one of the most valuable things I’ve learned. Just opening up opens people’s minds to the reality of mental illness and how it affects other people and the stigma related to it.”

Many of Zuckerman’s friends and family stepped forward to offer help. Zuckerman said that some of the most helpful things they offered included “just listening and empathizing, not judging, showing concern and asking about how we were doing. I have a lot of friends. I shared the bounty of my difficulties with them. I tried not to burn any individual out.” 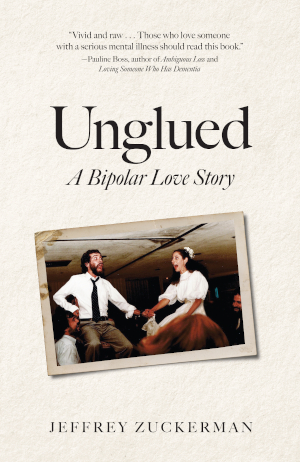 He also turned to his synagogue for help, meeting with the rabbis for advice on keeping his marriage healthy. He recited a public prayer asking for healing of a loved one. This act felt risky — but also significant.

“The first time I publicly said that prayer it felt like me opening up my arms and saying, ‘I need your prayers. My wife is sick. It’s impacting me and I need support and help right now,’ Zuckerman said. “It was a vulnerable thing to do.”

In the end, Zuckerman said he is happy that he decided to step forward and ask for help. He couldn’t have navigated Leah’s illness alone, and he’s glad that he was brave enough to ask others for the support he so desperately needed.

“I did it for me,” Zuckerman said. “This is how I stayed healthy. Personally I think we all need people in our lives to support us. With any chronic illness, it is a terrible thing to do alone.”

He hopes that his book, with its honest, no-holds-barred approach to describing the many struggles he faced, will help others who find themselves in a similar situation. By putting himself out there, he hopes that others will see that there can be a life after serious mental illness. With subtle injections of sly humor, he also tries to let his readers know that the rest of their lives don’t have to feel tragic. That’s an important part of breaking down the discrimination.

“There were some funny moments,” he said. “It’s one of the ways we survived.”

In it for the long haul

A diagnosis of a serious mental illness can be hard on a marriage, and Zuckerman makes a point of being brutally honest about how difficult Leah’s bipolar disorder was on him. While there were times early on when he briefly considered stepping away from his marriage, he never seriously thought about leaving Leah.

“She’s my wife,” he said. “I love her. I was on the receiving end of the illness when she was manic. It wasn’t easy. When she was depressed, I was here for her. She didn’t get out of bed for months, but I wanted to be there. She’d do the same thing for me.”

Bipolar disorder is a disease of the brain, Zuckerman explained. He would never leave Leah if she was diagnosed with cancer or had a stroke — why would he abandon her because she had a mental illness? That said, he admitted that he can’t judge other spouses for their actions.

“We all have our own moral compass. I’ve heard about people who’ve had to leave their spouses because of the danger or the hardship that mental illness causes. I didn’t leave my wife, but that’s somebody’s own moral choice. As long as my wife was willing to get to get treatment for her illness and stick with it and include me in that treatment plan and allow me to be alongside her, I have hung in there.”

These days, Leah is managing her mental illness.

“She’s doing great,” Zuckerman said. With the help of medications and the support of her medical team, she’s been stable for a year now. “They call it baseline. It will always be part of our marriage and part of our children’s perceptions and experience. It’s a serious illness, and we manage it like anyone else would manage a chronic illness. Even when it’s under control, it’s always there. But she’s managing it terrifically.”

There has been some good that has come out of Leah’s struggle with mental illness, Zuckerman said. Most significant is the realization that this experience has brought the couple of 36 years even closer together: “Now we love each other that much more.”

Reaching out to friends for help deepened his connections, he said. And through support groups, he said, “I also established new friendships and deepened existing friendships. As an aging male, I learned how to be open.”

Another way that Zuckerman dealt with Leah’s mental health struggles was to make sure that he took care of his physical health. In the warmer months, he rides his bike and plays softball in a summer league. In the winter, he joins an indoor tennis club, plays hockey and goes cross-country skiing.

“My wife’s bipolar is the best thing that ever happened to my tennis game,” he joked.

The couple’s children helped when they could, but Zuckerman tried not to overburden them with their mother’s illness. “You don’t want to drag your kids into taking care of their parents, even if they are adults,” he said. “I don’t want to pile that on their shoulders, especially when they are just starting their own lives.” Both he and Leah were overjoyed when their daughter, her husband and their toddler moved back to the Twin Cities.

These days, Zuckerman’s life — even with its new set of challenges — feels sweet. He’s come out of the scarring experience of Leah’s illness with a more open heart and a sincere desire to help others — a significant personal growth that he would’ve never expected for himself.

“I’m a more loving person than I was before this happened,” he said. “I’m a stronger person. I’m more in touch with my own feelings and my feelings toward my wife and toward everyone else in my life. I’m a more open and understanding person — and I want to share that with the world.”