A moment of parenting stress sent Christina Erickson, professor of social work and environmental studies at Augsburg University, down a long road of research into understanding why parents spank their children and the negative impact the act has on all parties involved.

For Erickson, the moment happened on an uneventful day nearly 20 years ago. She was caring for her two young daughters, then ages 2 and 4, while making dinner and getting ready for an evening meeting.

“It was a pretty normal moment,” Erickson recalled. “The girls were being age-appropriately naughty, fighting over a toy.” But Erickson was busy and her patience was wearing thin. This argument between two small children was threatening to throw her and her husband’s carefully-calibrated schedules off kilter: “I became really upset and angry — more so than I expected. I went into the room to hit them. And then I stopped myself.”

Erickson had never spanked her children before — though she grew up in a family where spanking was the norm. Something about coming so close to hitting her own children made her stop and rethink the way she’d always viewed spanking, an act she later discovered a majority of American parents consider an appropriate parenting tool.

“In that moment I suddenly saw how absurd it was to hit these human beings that I loved so dearly,” she said. “I realized the contradiction in that I had lived my life as a person who wanted to bring peace to the world and make the world a better place.” She explained that the impulse to raise a hand to her children brought that self-perception into doubt.

“I was under that notion for most of my adult life until the moment I wanted to hit my two beautiful daughters whom I would take a bullet for. The contrast with who I was and what I did at that moment was really stark,” Erickson said.

Erickson knew she couldn’t be the only well-meaning parent who’d come close to spanking but then thought better of it. A former social worker, she’d assisted many families that struggled with violence, but she’d never made a clear connection between run-of-the-mill spanking and what she viewed as more egregious acts of abuse.

During her social worker training, Erickson interned at St. Louis County’s Initial Intervention Unit in Duluth. “They are the first responders, the people who go out and take a look at child-abuse reports,” she explained.  She’d also worked on child-abuse prevention programming in nonprofits.

But even with all that experience, Erickson said, she didn’t make a connection with the kind of spanking (like a quick swat on the rear end), that many parents she knew and loved employed as a discipline tactic, and more damaging physical abuse, “until I wanted to do it myself.”

Erickson’s interest in the topic was piqued. She began researching spanking and its effect on families, eventually deciding to write a book on the issue. It was a long, all-encompassing project, and what she uncovered completely changed the way she looked at the practice. Her resulting book, “Spanked: How Hitting Our Children is Harming Ourselves,” was more than a decade in the making.

“I had a lot of evolution in my own thinking,” Erickson said. “Before, I was mired in the idea that spanking was a benign family discipline tactic that didn’t have big social impacts on a broader scale. But my research uncovered harms that were just too great to ignore.”

Like most Americans, Erickson considered spanking to be a normal, if not ideal, discipline practice that did little or no harm to children and their parents.

“I was spanked,” Erickson said, “and for many years I lived with the notion that, ‘I was spanked and I turned out fine.’ I felt that spanking is a benign family experience.”

In the early part of her research, Erickson tried to find clear definitions of spanking vs. hitting. 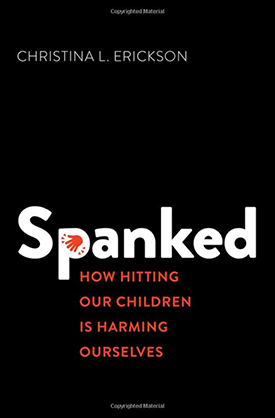 “I spent years trying to find exactly what a spank is,” she said, “to get a clear description of spanking. Do you pull the pants down? Do you keep the pants up? Do you hit one time or do you hit three times? How hard should you hit?” Try as she night, she said she could not uncover a clear definition of spanking, a fact that left her confused: “This leads me to believe as a social worker that spanking is everything from a swat on the behind to really vicious hitting.”

Eventually Erickson came to believe that calling most forms of hitting a child “spanking” covers its true meaning. “We veil a variety of hitting with that name,” she said. “There is much more diversity in that word than people imagine. It is so private.”

When Erickson talks to people about her research, their reactions further underline that truth, she continued: “People will often say to me, ‘I was hit. I wasn’t spanked,’ or, ‘I was spanked. I wasn’t hit.’ This is as if the two things are different. But spanking really is hitting. We have lost touch with the reality of what that activity is: Spanking is hitting a child.”

In her research, Erickson uncovered several studies that show that children who are spanked have worse outcomes on a number of measures than children who are not spanked, and the harsher the physical punishment, the worse the outcome. “There has been 60 years of research that shows poor outcomes for kids that are spanked,” she said. “That cannot be debated.”

The negative impact on parents who spank has been less researched, but Erickson was able to uncover some studies that show a correlation between hitting children, increased stress and loss of parental influence.

“Spanking has poor outcomes for parents,” she said. “What happens in a heated moment often is repeated over and over again. When you hit your kids you actually lose out on being the family leader, the hub of the family.”

An even darker scenario includes the involvement of the child-welfare system, she added. Many adults who interact with children on a daily basis — like teachers, coaches and even bus drivers — are mandated reporters. If a child mentions being hit by a parent in any way, these adults are required by law to report the incident to authorities.

“Many parents are unaware of the very ugly child-welfare system they are putting themselves at risk of being a part of when they spank their children,” Erickson said. “Many parents have a lot of fear that their kids are going to talk about being spanked. Spanking is usually done in private, but kids may say something to another adult, and then everything changes.”

Should spanking be illegal?

As her ideas about spanking developed, Erickson began to see its general cultural acceptance in a new light.

“We do not accept hitting in any other parts of our lives,” she said. “It is illegal to hit our spouse. We don’t hit an adult child or our older parents. This is the one relationship where hitting is sanctioned. Spanking does not respect the human dignity of children. This is sanctioned family violence.”

Spanking children is legal in the United States. Erickson’s new perspective on this fact inspired her to use her book as a call for making spanking illegal — something that has been done in many nations around the world.

“Sixty-five countries now have made all forms of hitting children illegal in every setting,” she said. “In the U.S., 19 states still allow paddling in schools. There are 65 countries that say you cannot hit a child in a school, in a residential treatment center, in a preschool. But in the U.S., Canada, Australia and England we still allow hitting.”

Countries that sanction spanking have different standards that define how the act can be done legally. In Canada, for instance, it is illegal to hit children before age 2 or after age 12. In the U.S., Erickson said, “you are allowed to hit your kids under the age of 18 as long as you don’t cause injury, laceration, swelling or bruising.”

This fine line makes Erickson uncomfortable. How does a parent, in an act of anger or frustration, control their impulses or their physical strength enough to avoid “injury?” And does the psychological harm caused by being spanked count as injury? Should it?

“I think of spanking as the gateway to child abuse,” Erickson said. “It opens the door to other physical things like shoving, hitting, body yanks, hair pulls. We point our fingers at awful parents who went too far, but we as a society have agreed that it is OK to hit your kids, to expect parents to make the judgment of their own actions. It is impossible to say it is legal to hit your kids but you can’t harm them.”

Erickson hopes that her book will help more people take another look at spanking and rethink the potential harm that even the most seemingly benign swats from parent to child can contain.

“I want parents who don’t spank hard enough to be abusive to still see the connection to the fact that other children are abused and spanking is still legal,” she said. “What I want people to see is that even if you aren’t from a legal standpoint abusing your kids, other kids are abused because hitting children is legal in this country. We’ve socially sanctioned it.”

She thinks that parents have an opportunity to learn from the words and phrases they’ve used many times with their own children. “What I said to my children over and over again was, ‘Use your words,’” Erickson said. “I realized I needed to begin to practice myself by having difficult conversations rather than by using force. It takes time and patience, but this approach can help parents in all parts of our lives.”