Minneapolis planners are dialing back some proposals in their long-range plan for development that would have further diversified zoning options for housing and allowed for taller buildings in more parts of the city.

The changes are an answer to critics who said the policy document, a new comprehensive plan called Minneapolis 2040 and currently in draft form, went too far in its proposals to allow for different types of construction in more areas of Minneapolis. Architects of the plan are set to release an updated version sometime next week, after reading some 10,000 comments from the public.

Meanwhile, city officials have established a process for getting information out about the changes, which includes working with an outside consulting firm to “reframe the narrative” around Minneapolis 2040 before next week’s release.

Triplexes — not fourplexes — are the new thing
Since city planners released the draft document in March, a proposal to allow multifamily housing of up to four units (fourplexes) in all parts of the city — even those now for just single-family homes — has been the most controversial aspect.

Opponents of the change said the idea was a misguided approach to development that would overrun Minneapolis with buildings that were out of character for many neighborhoods or give developers too much power. Supporters, meanwhile, said it would diversify the city’s housing market for the better — especially as the area grapples with a shortage of affordable living options and steady influx of newcomers. 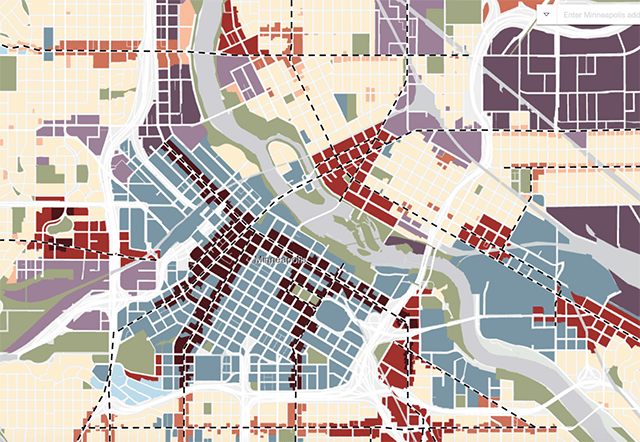 The plan’s chief authors — the city’s long-range planning director, Heather Worthington, and a principal city planner in Minneapolis’ Community Planning and Economic Development (CPED), Paul Mogush — say they’re changing the proposal based on lot size and building-code requirements. For lots that are around 40-feet wide or less (the typical size of a lot in Minneapolis), the new plan would now allow property owners to build complexes of up to three units (triplexes). Larger lots could still have fourplexes.

Worthington says the change makes more sense given the rules in the Americans With Disabilities Act that housing of four units or more requires at least one home that’s accessible to people with disabilities — meaning those larger complexes must include a ramp for wheelchairs, while smaller ones do not. “When we did our analysis, we looked at how you would site a four-unit building on a 40-foot lot and it resulted in a pretty awkward structure,” with units around 700-square-feet divided by two floors and lots of stairs, she said. “We just felt that a three-unit building would be more attractive and easier to site.”

The maximum height (in some places) is being lowered
Another change that came after much public criticism: City planners are lowering the maximum height for buildings near some public transit routes from six to four stories so streetscapes don’t change dramatically from what they’re now, Mogush said. The affected neighborhoods include all north of Lowry Avenue and south of East 38th Street, where he said most properties are just one or two stories.

“The magnitude of the potential change that could happen between the existing condition and a six-story building is kind of big, and that makes some folks uncomfortable,” Mogush said. For the same reason, city planners are proposing smaller complexes of up to 2.5 stories, not three, on busy streets where alleys separate two rows of buildings.

Also, the new plan will direct the city to establish better design standards for new buildings so that they better match those around them, Worthington said. The plan will also offer more context for city planners’ rationale. “This process really helped us as staff understand where we need to clarify ideas,” he said.

Not every controversial idea was addressed
The draft plan’s ideas on vehicle parking — specifically a proposal to completely eliminate off-street parking requirements for developers — remain unchanged for now. Among the more than 10,000 public comments, a strong number of people voiced concerns over that suggestion, while many others affirmed it as the right choice, Mogush said.

When CPED posts the new version of the plan online (Minneapolis2040.com) next week, people will be able to navigate between the draft and edited proposals to make comparisons, he said. He and Worthington also emphasized they’re using every last minute to make tweaks. “It’s a big digression. We want to get it darn near perfect,” she said.

Few people have seen the revised plan — and that’s how city planners want it
Besides a handful of people within CPED, few city officials — not even City Council members — have access to the edited policy document. Sitting in a conference room on the second floor of the Crown Roller Mill building (CPED’s headquarters), Worthington and Mogush explained the biggest changes last week along with three media-relations specialists. One of them was from Goff Public — the consulting firm that Minneapolis hired to help “control the narrative” around the plan, according to an outline of the firm’s job. That goal includes identifying “third-party validators”; creating “marketing materials” for how council members talk about the plan via social media and e-mailed newsletters; and waiting until “as close to the release date as possible” to talk to those elected leaders about the new ideas.

Leaders of the plan are taking these new steps around messaging after word of the draft’s fourplex proposal leaked to media and the public before the official presentation of the plan earlier this year.

Those briefings with council members are happening now. As of Monday afternoon, Council President Lisa Bender said she’s met with CPED staff, while other council members, such as Council Member Alondra Cano, will be doing so over the next several days. Mayor Jacob Frey emphasized in an emailed statement that the plan is evolving, and he’s “confident that we can arrive at a workable set of recommendations that earns the support of the City Council.”

Neither pro- nor anti-density folks are happy with the changes
Among the most vocal opponents is Carol Becker, who founded the group called Minneapolis for Everyone. She said city planners’ process for writing the plan has been bad since day one, and the fact that Minneapolis has hired a consulting firm to help control the messaging going forward makes things look even worse. “It’s all a semantics game,” she said.

On the other side of the advocacy spectrum is Neighbors for More Neighbors, a group that is pushing for greater density. In an email, a volunteer for the group, Matt Lewis, said in an email that the updates seem to be going in the wrong direction, though they haven’t heard the plan’s authors’ full rationale and they look forward to reading the completed document.

“The much-discussed fourplex proposal was a small step toward ending exclusionary zoning, but even then was a compromise that only went part way toward ending the historical inequities enshrined in the zoning code,” Lewis wrote. And “if Minneapolis is serious about achieving its climate goals, then enabling more people to live along transit corridors, near daily destinations, in places where living without a car is a realistic choice, is an obvious first step.”

Minneapolis 2040 is the backbone to other initiatives at City Hall
The 204o plan is not the only initiative on the council’s schedule before the end of the year. There’s also Frey’s $1.55 billion budget, which dedicates a record-high of $40 million to a variety of programs to make housing accessible for more people. Minneapolis 2040 is a guiding force behind that plan.

Alongside the comprehensive plan, Council President Lisa Bender is also pushing an inclusionary zoning ordinance, which would include requirements for developers to build a certain number of affordable housing units in all their projects. The full City Council will take up an interim version of the idea in November and consider a more permanent ordinance next year, according to the council president. She’s also working with Council Member Jeremiah Ellison to create a renters’ bill-of-rights, aimed at better protecting the city’s renters.

The plan could change some more
After the latest version of the plan is released next week, the Minneapolis Planning Commission will host a public hearing on Oct. 29, after which the commission will forward its recommendations to the City Council. A second meeting for the public to testify will be in mid-November. The council is on track to finalize the plan with a vote before the end of the year.

Triplexes, max heights and parking: what to expect from a revised Minneapolis 2040 plan