In March, the cities of Minneapolis and St. Paul announced that they were introducing a new standard for motor vehicle speed on residential streets in both cities: 20 miles per hour. This week, Minneapolis made it official, completing the installation of 20 mph signs along the city border to let drivers of the new limit.

Here, a look at what that means for drivers, and how it could impact street life in the cities:

So is it really 20 mph everywhere in Minneapolis and St. Paul?

The speed limit is now 20 mph in the city unless a different speed limit is otherwise posted. Larger streets, like Hennepin and Nicollet avenues, will be lowered from 30 mph to 25 mph, and a few city-owned streets still have limits above 30 mph, including West Lake Street near Lake Bde Maka Ska, and Cedar Avenue South over Lake Nokomis.

St. Paul plans to have its signs installed by early next year, said City Traffic Engineer Randy Newton. As in Minneapolis, St. Paul’s residential streets will be 20 mph, and larger streets like Minnehaha Avenue West will decrease from 30 mph to 25 mph. A few streets, including Phalen Boulevard, will be 35 mph. 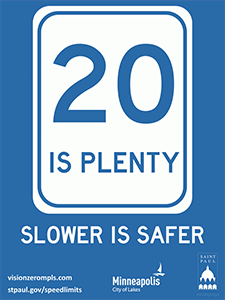 How diligently are the cities going to enforce it?

How each city enforces the new law may vary. Newton said St. Paul police will take “an educational approach” as the city rolls out speed limit changes. Minneapolis police spokesperson John Elder said the department is working with other city departments to help reduce crashes, but added that speed statutes will “continue to be enforced.”

The Twin Cities are following a national trend to lower speed limits in order to minimize fatalities or life-changing injuries. Both St. Paul and Minneapolis have “Vision Zero” initiatives that aim to cut traffic deaths on city streets to zero by 2027.  Driving at a slower speed means drivers have more time to react, which lowers the number of crashes. Lower speeds also reduce the severity of crashes. A person hit at 35 mph is three times as likely to die as someone hit at 25 mph, according to research in national studies and work by both cities. In fact, according to a National Transportation Safety Board study, the fatality risk in a frontal impact crash rose from 3 percent at 30 mph to 60 percent at 50 mph.

What does it mean for non-drivers?

The car has been king on American streets for generations. The slower limit hopes to cede some of the road back to everyone else. A pedestrian walking along a street with a 20 or 25 mph speed limit is at a lower risk of being involved in a collision, especially one that could alter their life. This has a huge effect on the level of comfort walkers, bicyclists and those taking public transit. According to Minneapolis’ Vision Zero Crash Study, 49 people died walking, riding a wheelchair or biking on Minneapolis streets between 2006 and 2015. While cyclists account for 5 percent of trips in the city, they represent nearly 20 percent of all crash fatalities. And though walkers are 20 percent of the city’s commuters, they make up 30 percent of all deaths and injuries.

Minneapolis’ Public Works Director Robin Hutcheson said speed limits can also be tied to racial equity, climate consciousness and prosperity. By lowering the speed limit, for example, the city can reduce the number of accidents — crashes that disproportionately impact people of color, she said. At the same time, reducing speeds makes it more comfortable for people not to drive, which reduces levels of greenhouse gasses that contribute to climate change. “Quality of life is behind everything we’re doing,” said Hutcheson. “Our streets, our right-of-ways, are the leverage points for the broad outcomes we want to see.”

The speed limit is now officially 20 mph in Minneapolis and St. Paul. What that means — and how it could affect street life in the cities